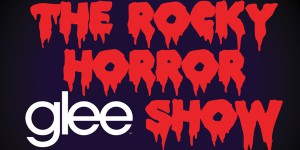 Let’s say there’s a super popular TV show and a particular episode of said TV show is being hyped to the max (guilty as charged), what happens when that episode finally airs and the critics have to weigh in. If that TV show was Glee and the episode was The Rocky Horror Picture Show, this critic would have to say it was…underwhelming to say the least. Maybe as with so many other over-publicized, over-advertised and over-hyped media outlets, it was impossible for Glee to live up to what it promised.

It dawned on me as I watched the original RHPS after viewing tonight’s episode that the reason Glee didn’t work for me was because it lacked the “outcast” confidence of the original. As Mr. Shue even stated in tonight’s episode, people flocked to RHPS because they were outcasts and as with any successful film or TV show, audiences were able to identify with the conflict of the characters. Unfortunately with Glee this week, that just wasn’t the case. Sure it was neat to see the Glee kids sing some of the RHPS classics and sure the episode had a decent message about self-expression and the role of arts, but at the end of the day that’s not what I watch Glee for. I watch Glee because it’s witty, it’s able to be edgy, positive and satirical and it’s able to do this all while filling half the episode with amazing songs and performances. Tonight it was none of those things.

A few episodes ago, Ryan Murphy, the creator of Glee was able to make a fantastic episode based on the music Britney F-ing Spears…and like I said, it was fantastic. As much as Britney was idolized in the episode, she’s really become more of a punchline in the eyes of most people today…but even in spite of that they were able to capture what made Britney so popular in the first place – her ability to be so forbiddingly provocative and do it while making pretty damn good pop music.

Glee had it all going for them tonight. As I stated earlier, what makes RHPS work and the reason it’s considered to have the longest running theatrical release of all time is because it’s an outcast and it’s proud as hell to be an outcast. Tim Curry’s swagger is infectious and undeniable, it doesn’t pull punches and doesn’t hold back, but Glee did. Tonight’s Glee episode could have been so much better. Earlier this week I read an article stating that John Stamos was originally intended to play Frank-N-Furter, but was held back by Fox because it was “too soon” for audiences to see our dear Uncle Jesse in drag -I think that is a perfect example of how this episode could have so much better. For a show that has high schoolers break out in song and shows teachers in ludicrous love triangles…not to mention Sue’s weekly shenanigans, tonight’s episode seemed so focused on trying to stay “realistic” by not allowing the kids to put on Rocky Horror because it was too sexual…are you kidding me?

If you read my previous article about the Glee/Rocky Horror mash-up you know that Ryan Murphy may be remaking The Rocky Horror Picture Show. I just hope that he has the balls to make a rated-R version that can at least do justice to the magic of the original.

Let me know what you think in the comments section below.