Wayback might be a bit of a misnomer in this case. I mean only to refer to films that I loved when I was child, which to be honest wasn’t all that long ago. I watch certain films these days, and wonder how kids could like them. Then I look back on my past, and I remember some pretty awful films that I loved, and will always love due to nostalgia. So, in these Wayback Wednesday’s I will be reviewing films I loved as a child, and I will see how they hold up these days. These won’t be like our normal reviews, since most of these films I loved for one reason or another, no matter how bad they are when I watch them again as an adult. 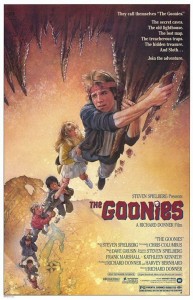 There are a few things every kid of my generation wanted to be, a superhero, a Jedi, or a Goonie. There is just something magical about having a big group of friends who you discover an old pirate ship with, all while being chased by a series of dangerous criminals.  So, I went back and I re-watched The Goonies, and I determined that I still wanted to be a Goonie.

If you aren’t familiar with the story of The Goonies, let me enlighten you. It follows an eventful day of adventure with Mikey Walsh (a young Sean Astin), Clark “Mouth” Devereaux (a pre-drug Corey Feldman), Lawrence “Chunk” Cohen (Jeff Cohen), Richard “Data” Wang (Jonathan Ke Quan), and Mikey’s older brother Brand (Josh Brolin in his first feature role). Together these young men make up “The Goonies” named after the local Goon Docks. The boys and their families are being forced to move by the local Astoria Country Club who is buying up their land. The story takes place on the last day before their families have to sell.  During the rainy day they venture up to the attic where they find Mr. Walsh’s collection of pirate memorabilia from the area for a local museum. The boys find a treasure map, and a dubloon which put them on their way.

The boys are led to an old resturant which is situated over the place they need to be to start looking for “One Eyed Willie’s” treasure. Unfortunately for them, recently escaped criminal brothers, The Fratellis, and their villainous mother are using the abandoned building to counterfeit money. The Fratelli family isn’t going to be the only thing standing in their way. On their road to treasure they meet Brand’s love interest Andy (Kerri Green) and her friend Stef (Martha Plimpton). The group must face old pirate traps, a “Sloth”, and the Fratelli family.

Today was the first time I watched The Goonies since I was a kid. It has always been one of those films that I look at on my shelf, and think to myself that I should pop it in for old times sake. I just never do it, mainly since my queue of  movies is so high as it is, I can never bring myself to watch certain classics from my childhood. The first thing I noticed while watching it today was some of the acting talent in it. Most of the children in it have either faded into obscurity, gone on to be reality show personalities, or in Jeff Cohen’s case an entertainment lawyer. There were two actors who stood out right away, and that was Sean Astin and Josh Brolin. Sean Astin had a big boost to his career due to his role of Samwise Gamgee in the Lord of the Rings Trilogy. Josh Brolin has recently come into a bit of a renaissance in his career with roles in films such as No Country For Old Men, W., and Milk. It is hard to look at them in roles like these and be kind of awed that they made it out of cult status.

The next thing that caught my eye about the film was the amount of cursing. It wasn’t real bad, but it was way more than I remembered, and it certainly wasn’t something you see in films of its ilk these days. Maybe it was one of the reasons I thought it was so cool?  When you are young pretty much anything forbidden is automatically written off as “cool”.  So, seeing kids curse allowed them the kind of credibility of a real kid. Don’t get me wrong about the cursing. I’m not some type of puritan. I was just surprised that in 1985 a movie marketed towards kids allowed them to yell “Shit!” so much.

I did a little research after watching the movie, and I found that the film wasn’t generally well received. It was a film that many critics wrote off as something children and young teens will like, but adults will probably despise it. The younger me probably would have been offended by this, and issued a rallying cry to all my friends to launch a smear campaign against such critics (or at least that is what I like to imagine young me would do).  I hate to say it, but as an adult I can kind of see where this criticism is coming from. They aren’t writing it off completely, but if you watch it from an adult’s perception it can be kind of alienating.  Once you grow older you become analytical, and a little bit picky when it comes to something like this. I kept asking myself “Why if there is a map of this treasure did no one else find anything about it?” “What kind of country club has the power to kick out residents to build a golf course?”

Luckily, there are no major plot holes within the film, just a few fantastical elements. No matter what age you can see what has appealed to so many people over the ages. Who doesn’t want strong friendships? Who wouldn’t dream of going on a daring adventure? Who wouldn’t love to find an old treasure? This is a film that I can enjoy no matter what, and it is one that will stand the test of time much better than other films of the era. Sure there are a few extremely 80s moments of film (the Cyndi Lauper video for instance), but overall once they are on the adventure it is a tale which can be translated into any era.

Grade as a Kid: A
Grade as an Adult: A