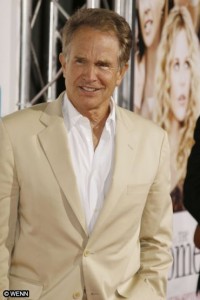 This comes from the “I Don’t Believe A Word Of It” category.  Peter Biskind, author of Star: How Warren Beatty Seduced America recently claimed that using “simple arithmetic” that the star bedded 12,775. Peter says, “12,775 women, give or take, a figure that does not include daytime Warren-Beatty-bighairquickies, drive-bys, casual gropings, stolen kisses and so on.”

So why don’t I believe it? I mean Beatty is an A-list actor, and I don’t doubt he bedded many women, but this number seems unrealistic. For one it is stupid to think that Beatty didn’t have a few monogamous relationships before his marriage to Annette Benning in 1992.  Some of those high profile relationships were with people like Madonna, Cher, Diane Keaton, Joan Collins, and Natalie Wood. So, assuming that Beatty has stayed faithful in his marriage, and the fact that he has apparently said he lost his virginity at age of 20 this means he would have to have  bedded multiple women on multiple days at points in his life. Still possible, but not believable.

It should be noted that Beatty’s lawyer has recently come out and denied the claim, and that Biskind’s book is an un-authorized account. So, take everything with a grain of salt.