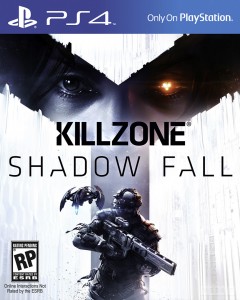 This year is a special year. Not because of our stupendous failings to supply a decent healthcare website for the people. No. This year is special because it marks the release of Sony’s newest gaming system. You can tell the staff here at ReviewSTL have our priorities straight.

The PlayStation 4 is Sony’s hunter towards Microsoft’s Xbox One. And like any good hunter, you need weapons, tools and a strategy. Sony has offered a somewhat lackluster lineup for its release titles to go alongside the PS4. Titles like Knack did little to instil confidence in the Japanese behemoth’s plans. 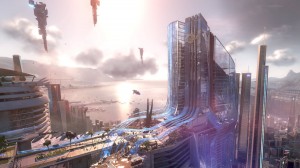 If there was one way for Sony to show what the PS4 is made of, Killzone: Shadow Fall is it. Let’s get the first thing out of the way – this game is beautiful. This isn’t your older brother’s grey-infused Gears of War. No. This game has an amazing color palette. It will leave you speechless and sometimes in awe at what’s possible by today’s talented designers and artists. In the game you come across bright neon cityscapes, post-apocalyptic wastelands and lush and inspiring forests. These environments aren’t all show, either. The game’s level design is very well thought out (as much as a liner FPS can be), and I was pleasantly surprised at the variety and feel of the levels. No copycat Halo levels here, boys. The character models and designs share the same level of love and detail as the levels, with sweat dripping down characters’ faces, the quiver of a lip or the twitch of an eye – all in glorious 1080p.

So we’ve established the game looks good, but how does it play, what’s the story, does it keep you wanting more? Killzone: Shadow Fall’s gameplay isn’t something “new” or “exciting.” Everything that’s been done in a shooter before is standard fare in this title. But what sets Killzone: Shadow Fall apart from the rest is in its execution. Everything is just so well done and polished. Yes we’ve seen that gun before, or the standard you-call-out-the-enemies-and-I’ll-shoot-them bits, but it’s very well put together. The story is also interesting, but fails to keep steam and I found myself playing it through just for the FPS enjoyment factor. It has a very Cold War and Berlin Wall-esqe feel to it. Vektans (the good guys) are living on the same world divided by a huge wall with the Helghans (the bad guys). This is after the Vektans destroyed the Helghan’s homeworld and killed billions of people. So, as you could imagine, they don’t exactly hug at dinner parties. You play a Shadow Marshal known as Lucas Kellen, you start the game off as a young child escaping the Helghan’s tyranny and grow up ready to kick some Helghan ass. As expected, you start off on your patriotic mission only to discover the true enemy may be someone much closer to you. 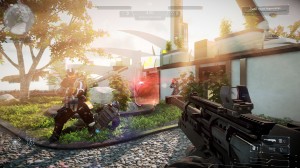 I encountered no bugs, which is nice, but this was offset by some questionable and outdated design choices by Guerilla Games. The game has some great moments and cinematic appeal, but more than once I encountered bits where I was tasked to do something over and over or a slight variation of that thing. This grew tiresome, and I felt like I was playing a shooter designed in the 90’s rather than something on the PS4 in 2013. Also there was one instance where you’re fighting an un-winnable situation and the only way TO win is to jump into a gun. The kicker? The game does a pretty good job of NOT telling you this gun is there for you to use and proceed through the game. I nearly raged and quit and exclaimed “this is impossible!” before realizing, “oh, hey, I can use this gun, it makes life much easier!”

All in all Guerilla Games’ foray into the PS4 is a genuine and decent affair. The game comes at you like a gorilla screaming only to whimper with some poor design decisions later on. Is it enough to buy a PS4? Probably not. Is it a precursor as to what’s technology possible on the PS4? Yes. Yes it is.