Video of Dan Parris in Hospital, Minutes after the Nairobi Plane Crash 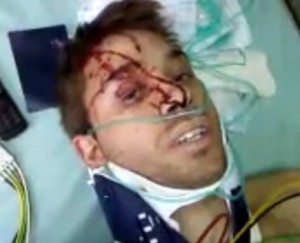 Dan and Rob, two St. Louis filmmakers, were injured on a plane that crashed in Nairobi. The two were working on filming for their documentary, “Give a Damn?,” which is aimed to help raise awareness of poverty in Africa and promote global justice. Learn more about Give a Damn? at their website, www.giveadamndoc.com.