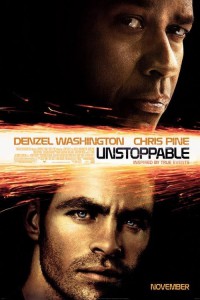 Tony Scott’s second film in a row revolving around trains and starring Denzel Washington, “Unstoppable,” is based on a true story unlike the last. In May of 2001, an unmanned train left Stanley Yard in Walbridge, Ohio and traveled 66 miles while a rescue attempt was planned and executed. Fortunately, for both Scott and Washington, their latest film is much better than their last attempt to carry action onto a train.

Will (Chris Pine) is a young conductor that is going through problems with his wife, as he is just starting a new job. Due to the strings that were pulled to get him the job, and some family connections, the veteran engineers he works with are not too welcoming to the rookie. He is assigned to work with Frank (Denzel Washington), an old timer with decades of experience, to go out on their first assignment. Although they set out to do nothing more than transport cargo, an event is taking place that would ultimately put them on the same tracks as a another train that is half a mile long and carrying enough combustible material to wipe out a highly populated town in Pennsylvania.

The film picks up it’s momentum in a similar fashion to the runaway train starting down the tracks. The first third of the film is rather slow, rolling along as we are introduced to the characters and the plot is set in motion. There are many shots of the train that the two leads are on, rolling peacefully down the track surrounded by quiet – in contrast to the catastrophe that is underway on the other end of the tracks. But once the two of them are alerted of the issue and get involved, the movie is set at full throttle with no signs of breaking.

At first one might wonder how is a movie about an unmanned train going to be exciting. I must admit, I had my doubts. You logically would think that there must be some way to stop it remotely, or with a computer system. But of course the film makes it nowhere near that simple, and the explanation as to why it can’t be done work quite well. The way the film is shot, and the tension you feel as the runaway train is narrowly avoiding other passengers, trains, and other targets is incredible. Scott takes a situation that seems quite simple, and magnifies it to something much more complex.

Denzel Washington and Chris Pine do a fantastic job throughout the entire film. Their chemistry together works out perfectly, as they try and put their differences aside and work together. Although their two characters are polar opposites, they really compliment each other quite well as they both grow tremendously during their unexpected train ride. Rosario Dawson plays Connie, the manager of the train company they work for. She is in charge of cleaning up the whole mess once it is underway, and her job is threatened by her boss Galvin (Kevin Dunn) if it doesn’t end up alright. Her interaction with the two leads via radio is quite charming, as they interact for the first time under less-than-desired circumstances.

Don’t let the first part of the film fool you. Although it starts out slow, the last two acts more than make up for it. After things are setup, and Washington and Pine’s characters start formulating their plan to stop the runaway train, the remainder of the film will have you hanging on edge of your seat. “Unstoppable” is a fitting title, as it barrels full steam until the end credits. Get ready for one hell of a ride.

“Unstoppable” is a B