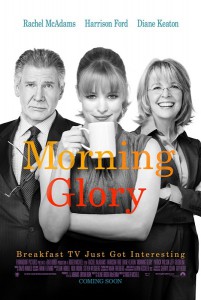 Every time I discuss a romantic comedy the inevitable discussion turns to that of formula. Everyone is familiar with the formula of a romantic comedy, and that is why they work. Some truly try to change the format and succeed because of it (i.e.When Harry Met Sally, (500) Days of Summer), while others stick closely to the formula so much that it stays stagnant (i.e.When in Rome,  Leap Year).

Morning Glory is yet another film that sticks closely to formula, this one in a similar vein to films like Devil Wears Prada, whose writer Aline Brosh McKenna is also the writer of this Rachel McAdams vehicle. McAdams plays the plucky TV morning show producer, with a lot of drive, and plenty of enthusiasm. When Becky becomes the latest victim of budget cuts at the network, she is forced to look elsewhere for jobs. Luckily, her job comes in the form of a national morning show by the name of Daybreak, which despite its long history at fictional TV giant, IBS (a rather unfortunate name for a television network), is dead last in the ratings behind shows like Good Morning America and The Today Show.  Becky is immediately tasked with bringing the program up to its old standards, despite a dysfunctional crew, small budget, and lack of a solid male anchor.

Being the go-getter that she is Becky decides to fire the male anchor on her show immediately, and pursue the legendary news anchor Mike Pomeroy (Harrison Ford), who despite being an award winning newscaster has fell from the spotlight, and quietly lives his life on his multi-million dollar contract. Becky, of course, sees the beauty of having a trusted news anchor on a morning show, and find a line in Pomroy’s contract which brings him to the show. Despite being Becky’s dream come true, Pomeroy is probably closer to her nightmare.

Will Becky be able to balance her work life and find true love? Will she be able to tame the savage beast that is Mike Pomeroy? Well, as I said earlier this is a formula movie, so what do you think?

Despite doing nothing that surprises you, Morning Glory is solidly entertaining.  The film is bolstered by McAdams striking affability. Her overenthusiastic character could have come off as cloying and annoying, but rather is cute and charming. This lends credibility to her character, who in her late 20s in producing a national morning show.  She is aided by the performances of Diane Keaton, who luckily keeps herself from turning into too much of a caricature.  Patrick Wilson makes solid appearance in what has been a busy year as Becky’s love interest in the network.  The two easily find a chemistry together, despite being possibly the most underdeveloped story in the film.

Although, the actor that may surprise most is Harrison Ford.  Gone is the devilishly charming actor you remember from his iconic performances in Star Wars and Indiana Jones, instead Ford easily slips into the curmudgeon Mike Pomeroy.  If you’ve seen recent interviews with Ford, this character actually seems closer to his normal self these days compared to the wise cracker from the 80s. His gruff exterior, but “fluffy” inside makes it one of his better performances of the past decade.

Morning Glory is a genuinely funny film, that will keep you entertained throughout. Sure it doesn’t reinvent the wheel, but sometimes you don’t really need to. These films stay popular because people love seeing something they can relate to in its familiarity.  If you like romantic comedies, with strong scripts, and charming casts, this is a film you’ll easily enjoy.