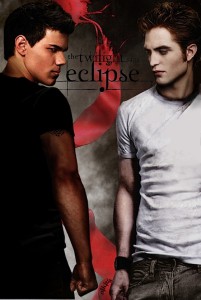 The third installment in the Twilight series Eclipse opened to high expectations from fans and even some critics.  As far as Twilight movies go, it was the best one yet, but unfortunately that’s not saying much.  As with its predecessors, Eclipse falls somewhere between mediocre and horrible albeit slightly closer to the mediocre end of the spectrum.

The plot of the film is as follows: Victoria, returns to avenge the death of her mate and has created an army to do so, Bella blows off Edward’s marriage proposals (as any sane 18 year old should do), and Jacob is insistently pursuing Bella even though its kind of obvious she’s not going to leave Edward (dude, seriously, take a hint).  The “action-packed” part of the film that the trailers keep touting lasts all of 5 minutes and under the direction of David Slade, its impossible to make any of it out.  Bella is still a blubbering idiot who needs a man to tell her to do anything and is still incapable of thinking for herself.  I understand that this is due to Stephanie Meyer’s awful books, but still, it makes for a ridiculously misogynistic film.

I was bored during the first half of the film, and thankful for the final fight scenes as I knew it would be ending soon.  Kristen Stewart’s Bella stuttered and blinked less in this film than the previous two which improved the quality of her acting 10 fold.  Robert Pattinson and Taylor Lautner brought the same passable performances in this film as the previous two.  As much as I hate to say this, I even disliked Dakota Fanning’s Jane.  She seemed as bored with the part as I felt watching the film.  I have very low standards for films, all I ask for is that the film hold my attention for the time that I am watching it, so I don’t have to think about anything else for that period of time.  If I am balancing my checkbook during your film, then you have failed.  Eclipse failed.

Eclipse is a D+