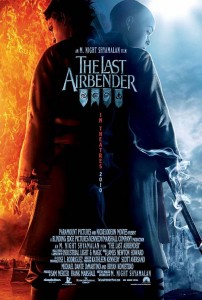 Things have gone wrong in the world of The Last Airbender. The four nations, Fire, Water, Earth, and Air are at war. Fire Nation has obliterated the Air Nation, has the Earth Nation under their thumb, and has Water Nation passively seeking to stay out of the conflict. The cause of all this? The Avatar has gone missing. The Avatar is a person who for hundreds of years united the nations, and kept peace up until he disappeared a hundred years ago.

Two teenagers from the Southern Water Tribe, Sokka (Jackson Rathbone in his second big budget flick of the weekend) and Katara (Nicola Peltz), come across a young boy frozen in a ball of ice, that once cracked emits a huge amount of energy, revealing their presence to the fire nation. The young boy, Aang (Noah Ringer), has the markings of an Air Bender (a person who can control the properties of air). Their situation is noticed by a nearby Fire Nation ship, which just so happens to contain the banished prince of the Fire Nation, Prince Zuko. Zuko takes the boy, and quickly discovers that he is indeed the Avatar. Zuko’s father had told him he had to capture the Avatar to become part of the Fire Nation.

The rest of the film is very much a cat and mouse game between Aang and his companions, being chased by Prince Zuko, and Commander Zhao, who wants to capture the Avatar for Fire Nation before Zuko. Aang must realize his true destiny, and become the Avatar to reunite the Nations again.

I had long hoped that the lack of a twist ending would help M. Night Shyamalan. It seems he has long been laboring under the delusion that every film from him requires a twist at the end to be successful, and it has trapped him as a storyteller. Unfortunately, it seems that a film like this only enhances the fact that he might be an incompetent director.

The film as a whole is a very expensive mess.  Sure the special effects look pretty good (minus the added in 3D that is pretty lame), and some of the martial arts scenes are actually pretty fun. It is the story that really gets in the way of itself. It appears they never found a way to break down a serialized show, and present it in a compelling way to be shown on the big screen. Almost every character is underdeveloped, and relationships are thrown in our face, rather than grown on screen organically.

The thing that highlights the poor quality of the script is the dialogue. Sure, the plot is a big mess, but we could at least hope for some compelling dialogue in between, right? Wrong, what we get is a bunch of convoluted voice-overs that highlight the lack of coherence in the plot. In addition to that we get cringe worthy dialogue in just about every scene.  It is a little bit scary that a filmmaker like Shyamalan who has a decent number of films under his belt, wouldn’t catch dialogue this unnatural.

Unfortunately, the actors are thrown under the boat by the dialogue. Their performances are wooden, but I’m not sure even the greatest of actors could have done anything. So, for the moment they all get a reprieve in the hopes that their next project proves them to be a bit more capable when given quality source material.

I kept feeling throughout the movie that I might be missing something. The film seems a bit more tailored to the people who already know the story. The film automatically assumes that you must know the mythology behind the story, and are already familiar with the relationships that will take place within the film.

Possibly one of the worst things about the film is that it never really seems to wrap itself up. We are introduced to the fact that this is “Book One” in the beginning of the film, but no one would ever expect that we would get little to no closure by the end of the film. Possibly frustrated by the fact that he could not make a twist at the end, Shyamalan compensated by doing a cliffhanger instead?

I’m not really sure I can recommend anyone seeing The Last Airbender. It really is a mess of epic proportions. I might be being a bit too harsh though. Many children will probably enjoy the bright visuals, and decent wire fighting. Fans of the series might get some enjoyment out it, but it seems to lack the spark that has made the series such a popular worldwide phenomenon.

The Last Airbender adaptation from the adored Nickelodeon show doesn’t really come together and I don’t think it will work for the loyal or uninitiated viewer.

The film follows three plot lines, a brother and sister from the water kingdom, a exiled prince of the fire kingdom, and the last airbender who just so happens to be a mythological deity, or Avatar, that has been missing from the world for the last 100 years.  The prince has been looking for the Avatar and after the brother and sister accidentally awaken him from his unknown slumber the group’s destinies become intertwined.

Now, the film was one that I was excited for, I was intrigued by Shyamalan doing something that wasn’t his own, ILM’s work looked great in the trailers, and the source materials praise was enough to get excited. But sadly my excitement was not quenched and I never really fell into any true enjoyment of the picture.  I have not seen the TV series and if you have not either you’re not going too have a lot to grasp onto when watching this film as it moves forward skimming through the 13 or so TV episodes it is based on.  Things move fast, we don’t get a lot of substance, and characters and relationships are built up with little to no ground to stand on.  It is just impossible to become engaged in what is going on and not feel like we are skimming the surface of something much deeper and rich.

And you do feel like there is a ton of potential as an uninitiated viewer, the world seems rich and full of interesting mythology and fantasy but we rarely feel like we are experiencing something unique and special.  The feel or the material feels very familiar for any fans of fantasy and stylistically you can see a lot of Shyamalan’s inspirations from other big budget fantasy films of recent years.  The film only occasionally feels unique and owns itself and its material as something original but Shyamalan’s direction seems to not quite work with the film.

Shyamalan can be a great director and I am not a basher of the man like many have become.  But his dialogue has always been fairly simple and minimal and he does nothing to enrich the source.  Added to this, he gets some pretty bad work from a few of the films actors.  Everyone seems to be shouting their dialogue the whole time and overacting beyond belief.  Shyamalan also seems to not quite be up to the action in the picture as everything just feels like it is moving in slow motion when things should be lightning fast.  I get it is trying to be graceful and beautiful but there were too many occasions where I felt like I could have ran up and punched someone while they tried to bend the elements or make their next move.  The final fight sequence of the film though, as Aang heads up to the top of the wall, was the only awesome thing in the movie.  Also, the 3-D, it looked good for the post-conversion process, but they really didn’t try to do a whole lot with it.  This might have helped actually as they didn’t try to make everything pop and instead just focused on the money shots not looking horrible and in that the succeeded.  But, I would have much rather watched it in 2-D if I had to watch again, without a doubt, it seemed way darker than usual for a 3-D film.  Also, the sound in our theater seemed out of whack, which might have heart the film a bit, but nothing of great significance.

Of the actors, the Fire Nation were the only ones to really do anything of interest with Dev Patel surprising us as a fairly interesting villain and an appropriate tone and performance.  Aasif Mandvi is also slimy and good in his first major film role and I think people will remember the Daily Show vet as one of the better parts of the film.  Jackson Rathbone luckily has Eclipse coming out this week as well, as he is superior in that compared to his blah work here, but Nicola Peltz takes the cake by being by far the worst thing about the movie; sorry Nicola.  Noah Ringer looks the part and handles the action well of Aang, but I am not quite sure how I feel about his characterization beyond that.  Maybe a fan of the show could clue me in on if he fit the bill. If it is of any worth, I don’t think anyone really had a whole lot to work with as they are basically spouting pure exposition, please show us, don’t tell filmmakers, most of the time and there is nary a fun line to be found in the uninspired script and direction.

In the end, The Last Airbender feels like a huge missed opportunity.  There is a potentially fun and great movie in here and apparently I will have to go to the TV show to find that; which I plan to.  So as a promotion for the show it does a good job, sadly it is in the vein that I am thinking, “Wow, there is something kind of cool here.  Too bad it isn’t this.”  It will be interesting if they will get to make books two and three, and I imagine if this does well they will bank roll the next two at once, let’s just hope they turn out better than this.  Oh well, at least it sounds like there is one great version of this already in existence.

The Last Airbender is a D- 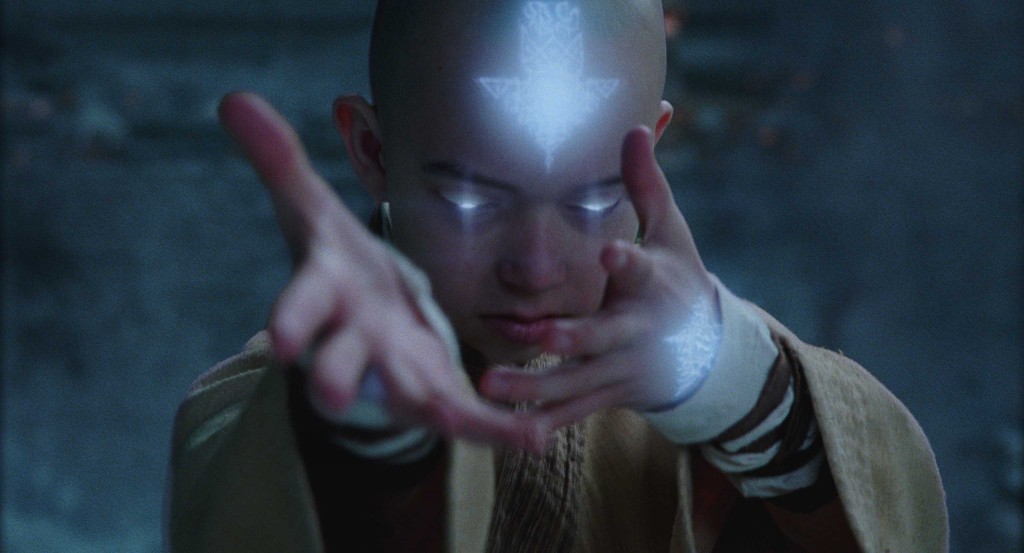