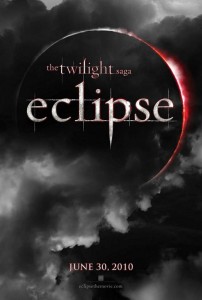 “The Twilight Saga: Eclipse” is the third film adapted from the Twilight phenomenon, springing from the bestselling series of novels. Following the trend of ‘Twilight’ films getting better each time, ‘Eclipse’ is no exception.

‘Eclipse’ revolves around Bella (Kristen Stewart), a human living in a world surrounded by vampires and werewolves. Of course, it doesn’t make things easier knowing that she has to choose between the two. She can marry her vampire boyfriend Edward Cullen (Robert Pattinson), who she wants to turn her into a vampire, or childhood friend Jacob Black (Taylor Lautner) who recently gained the ability to transform into a werewolf. And of course the two hate each other, so that doesn’t make things any easier.

Vampires and Werewolves are forced to put their differences aside, as a series of killings take place in Seattle. The Cullens discover that they are the work of new bloods, the earliest form of vampires. Since they are the closest clan to Seattle, they must investigate the killings. But at the same time, Bella is in danger and needs protecting from Victoria – who’s fiance was killed by Edward in the first film. So to balance both the protection and investigation, both Vampires and Werewolves must form a truce and work together.

‘Eclipse’ is by far the best of the films in the series. With more success comes a bigger budget, and that means better production values and better special effects. David Slade gave the film a darker, more serious look and feel. His experience from making “30 Days of Night” helped make the movie a little more edgy. The pacing of the film is very consistent, and there is enough going on to keep even non-fans entertained. It also doesn’t hurt that there is a good amount of action, and some pretty good fight scenes towards the end of the film.

All of the actors in the movie play really well off of each other. The chemistry between Bella and Edward is much better on-screen than it has been in previous films (likely due to the fact that they were dating in real life during filming). Taylor Lautner takes on a more serious role as Jacob in this film, and has grown as an actor since the first two films. All of the leads have worked on other projects and have had more experience since ‘Twilight,’ which really shows in this film. And there is also a great cast of supporting actors. The entire Cullen clan, lead by Peter Facinelli as Carlisle, does a great job. They did an excellent job casting when they were finding actors that would be in the next four (or five, counting the two part “Breaking Dawn”) films, and do a great job together. The only role that changed actors was Victoria, formerly portrayed by Rachelle Lefevre and now by Bryce Dallas Howard. It was a smooth enough transition, and didn’t disrupt much due to the small amount of screen time she sees.

The writing in ‘Eclipse’ wasn’t terrible, but still leaves a little left to be desired. On the other-hand, they stayed very close to the book, so fans of the series should be pretty happy with the almost direct translation to the big screen. One of the most satisfying parts of the film is when we get to learn more about the characters and their back-stories. There are two flashback scenes, for each Rosalie (Nikki Reed) and Jasper (Jackson Rathbone) Cullen. We learn more about them, and how they became vampires. Both of the sequences worked well, and helps to make sense of the ways that both characters act throughout the series. This film by far has the most interesting story, with more than one conflict going on to keep the audience intrigued.

If you are a fan of the ‘Twilight’ books and movies, there is no doubt that you are going to love ‘Eclipse.’ With that being said, the film is also serious and entertaining enough that even someone who isn’t the biggest fan of the series will most likely be entertained. The story consistently moves forward, and keeps the audience intrigued. Overall, it is a solid summer movie that makes for a worthwhile trip to the theater.

“The Twilight Saga: Eclipse” is a B 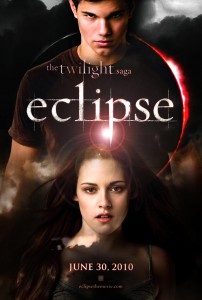 The third film in the quadrilogy (yes Breaking Dawn is splitting in two, but it is really one movie) known as The Twilight Saga, Eclipse is actually good, in fact it is really good, and is a huge step forward for the franchise before the finale.

Now, the film takes no time to try and catch up the outsiders and I won’t try to do so either.  Bella and Edward are busy going back and forth over the vampire’s marriage proposal while Alice sees a vision that will set the film’s plot into motion.  A growing threat in Seattle threatens the supernatural, and human, inhabitants of Forks and while the Cullens try and figure out what is going on up north in Seattle they must also try to keep Victoria and the Volturi from Bella.  The circumstances force the vampires and werewolves of Forks to form a loose alliance for the best of all of them and Jacob makes one last attempt at the heart of Bella whom he loves.

Now, if that paragraph didn’t make sense to you then you shouldn’t be seeing this movie as you should probably check out the first two films first.  And even if you think those two are just average to awful films, I would still implore you to give this film, Eclipse, a shot as it is a solid fantasy adventure that takes advantage of all of the best qualities of the series source novels by Stephenie Meyer.

If you are still unwilling and going to complain about watching a teen romance then there is no hope for you liking these films anyways and while there is still plenty of swooning and attempts to sweep each other off their feet in this film it is made much more realistic and watchable do to tighter writing and better performances.  Stewart and Pattinson have a great chemistry in the film and Taylor Lautner shows signs of growth as an actor, even if he is still the film’s weakest link.  The average romance dialogue is one of the few weak points you will find on this film and maybe a few scenes linger a minute or two too long.  Other than those issues though, I can’t really find a lot to complain about.

The films pacing is mostly solid, always moving forward and never stopping to really spell things out.  David Slade’s direction lays its confidence in its audience that it will be able to follow along and this film never tries to pander too the uninitiated.  And even when the film does slow down a bit, these are some of the best moments of the film as slow spots in Eclipse usually give us more background on the Cullens as we flash back into a couple of the family members early days as a vampire.  The action scenes are also superior to everything else in the series and the final fight is easily a contender for one of the best action beats of the year so far.  The brutality on display is also quite surprising at times as vampires are beheaded and dismembered left in right in the end.

The films look and effects are also the best the series has seen and Slade really shot a very attractive picture here.  The film just looks like it should for the amount of money it has made and it seems that Summit has spared no expense and it really has paid off.  Slade’s “darker” resume helped the picture mature and be much more accessible beyond the target audience and this could have reached a very broad viewer ship if it was an original property and didn’t have the first two films in the series keeping most anyone but fans away.  The first film was a solid origin and base for a series that sadly pandered too much to its target audience.  The second film was a step back from the first, mostly because the most interesting aspects of the series, the vampires, were non-existent.  Here, the Cullens are front and center, the mythology is greatly opened up (and I hope they flash back even more in Breaking Dawn), and the action is really given a fair shake; lets just hope these themes carry over into the finale.

The cast continues to do fine work here, Stewart shows a lot more life and energy in Bella and this is her best turn yet in the role.  Pattinson continues to be the best of the young bunch and doesn’t deter at all here.  Lautner gets better but there is still room to grow and Niki Reed and Jackson Rathbone both take full advantage of their much greater roles in this film.  Lastly, Billy Burke continues to provide a great real world rock for us to connect with and gets that he is supposed to remind us that we are ultimately watching a silly fantasy film.

In the end, The Twilight Saga: Eclipse is a gigantic step forward for the series and blows the other two films out of the water.  If this wasn’t a Twilight film it would have a lot of people excited that will never touch this sometimes great entry into the fantasy adventure genre.  Eclipse is a fast, fun, and action filled romance that obviously is never going to appeal to everyone, but I think this film really could if it was ever given the chance by the non-Twilight audience.  Eclipse is about as good as a Twilight film its fans, and non-fans, could hope for and  is a summer blockbuster that does just about everything right.

The Twilight Saga: Eclipse is a B+ or A-, I can’t decide.