Geeks have always played a pivotal roll in television. Most of the time they are used for comic relief, but every now and then they get to save the day. Shows like The Big Bang Theory and Chuck are putting the geeks front and center, and proving that geeks are much more interesting than a cast of pretty people. So let’s take a look back at some of television’s best geeks/nerds/dorks/etc.

Screech (Saved by the Bell) 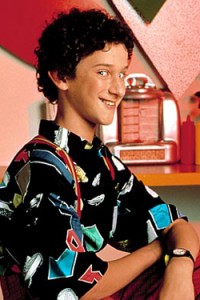 Here is one I am pretty sure everyone remembers.  Screech is the typical tv geek/dork/nerd.  He probably falls more into the nerd category than geek, but for all intensive purposes we will qualify him as a geek. Screech spent many a season on Saved By the Bell (or as it was first known Good Morning, Miss Bliss) pursuing women he could never have.  Samuel “Screech” Powers may have been the most annoying character on the show, but he was an integral part to the comic relief.  He also had a big heart, as evidenced when he tried to give Valedictorian status to Jessie because it would mean more to her. I’ll never understand why he was so loyal to people who were petty and mean to him, but it made for an awful tv show that was entertaining at the same time.

One of the newer geeks on tv, Walter is a genius with a lack of social skills. No, he isn’t autistic (or at least they haven’t clarified that), but he might as well be. He might unfortunately tell you about an erection he has while describing how the latest crime ‘Fringe’ division has encountered. The man has no filter, but that isn’t what is most interesting about him. His shady past involving his son and the ever elusive ‘Observer’ give us hints he might not have always been insane. You have to respect a man who was one step away from being the most respected scientist of his time, only to have that honor given to his former partner and colleague, William Bell (played by geek’s choice Leonard Nimoy). 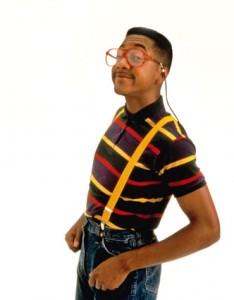 Hypothetical situation: A man gives you a special gun. He tells you that this is a magic gun. You can kill anyone of your choosing on this list with no consequences. Who do you kill? Well, that is obvious, Urkel. Although, I wouldn’t hold it against you if you wanted to make him hug Screech, and try for a two for one.  Steve Urkel is easily one of the most annoying characters to ever get popular on television.  Both him and Screech existed apparently before sexual harassment lawsuits became commonplace. Urkel is one step away from dropping Laura a roofie in many of the episodes. Although, apparently he was a genius. He was able to transform himself in to the uber-suave (at least in TGIF land) Stephan Urquel to win over his love Laura Winslow. Even creepier he used Bruce Lee’s DNA to turn himself into a kung fu genius in one episode. Watching Urkel ask, “Did I do that?” was like watching a train wreck, it wasn’t pretty but for some reason you were fascinated and couldn’t look away.

I still can’t decide if Adam Brody’s Seth Cohen is a very good representation of a geek or the most inaccurate. Personally, I think he is a geek’s pipe dream. Sure, he starts the series out as a spineless comic book, indie music, Japanese cinema loving geek, but by the end of the series he has bagged the hottest girl in the series and made her his geek princess. What geek doesn’t dream of this happening? I have yet to find a woman who wants to hear about the amount of depth of my DVD collection due to my Criterion collection, but this guy creates an amalgamation of two holidays and is ruler supreme of his geek universe. I have to give it up to this character, it launched Adam Brody’s now somewhat stagnant career, and created the Adam Brody-type character (yes, apparently there is a type). It gave rise to geek culture to be acceptable on a much larger scale, creating new geek chic. It is really up to you to love him or hate him at this point. I personally revel in Chrismukkah every year. 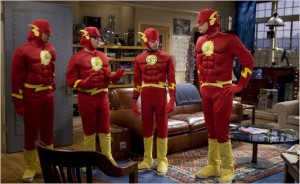 “i.e. I couldn’t become Green Lantern unless I was chosen by the Guardians of Oa, but given enough start up capital and an adequate research facility; I COULD be Batman!”

If you understand what Sheldon is saying in that quote, congratulations you are a geek. This is one of the things that makes me love this show. As I watched this with my family I was the only one who laughed, because I was the only one who understood it. I still don’t know if this should make me proud or sad. The Big Bang Theory is chock full of geek tidbits that only other geeks get. Although, they are presented in such a manner that anyone can find them funny. They represent every form of geek on this show. Sheldon is the over bearing, too smart for his own good geek. Leonard is the well meaning, smart, and likeable geek. Raj is the foreign geek, who isn’t particularly used to our culture, afraid of women geek.  Howard is the creepy wannabe ladies man geek. Ok, so maybe not every facet of geekdom is portrayed, but what they do show is entertaining to all geeks alike. What other show references comic books, physics, Star Trek, gaming, and other geekdoms on a regular basis? 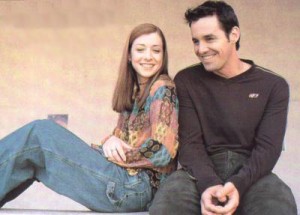 The whole series was just one big exercise in geek pop culture if you really think about it.  The irony of it all, is that itself now is a part of geek pop culture. This is the show that launched a thousand blogs for Joss Whedon (only to become more fanatical with the release of Firefly). The geeky Xander and Willow were quickly made part of Buffy’s Scooby gang, and kept the laughs coming. Xander with his constant pop culture references to deal with his rejection (and later acceptance by Charisma Carpenter’s Cordelia) is easily the funniest character on the show.  Willow might take the crown for biggest geek. She is apparently at a pro at computer programming, to the point that she takes over the class at one point, and manages to fall in love with a cyber demon. She goes deeper in geek realms after becoming obsessed with witchcraft. Don’t worry Willow we know how geeks get obsessed, ask any WOW player with a level 80 with epics. Without Joss Whedon & team’s sharp wit these characters would have easily been disposable characters, but instead are some of the greatest characters ever on television.
Hiro (Heroes) 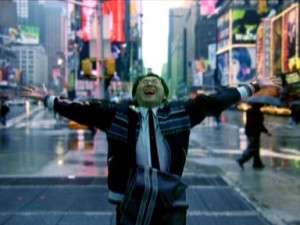 Oh, the potential for this show. The potential to take a look at comic book style powers in a realistic setting. It has been done before, but not done well. For a little bit it looked like Heroes might have a shot of finally breaking that streak.  It had an ok start, not great, but there was potential. There was a geeky Japanese character named Hiro who was the highlight of the show. With his control of the space time continuum he could be the most powerful person on the show. The best part about this character? He was fascinated with American geek culture. American comic books led his quest to be a superhero, and gave him what he knew of American culture. Starting with the second season, the show lost its way. Hiro stopped being an interesting character, characters were dropped without explanation, plot holes riddled the stories, and characters no longer made decisions that made sense. I still prefer to think of Hiro in his geeky first season incarnation. 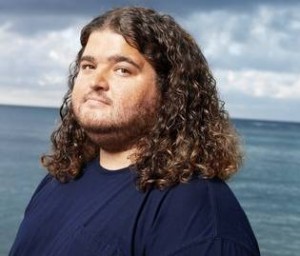 If Lost ends well, and answers the most nagging questions I will tattoo those numbers somewhere on my body. If it ends well it will most likely go down as one of the greatest shows of all time. Great production values, intriguing story, and great characters. One of the fan favorites is the slightly overweight lottery winner, Hugo ‘Hurley’ Reyes. This is how much of a geek he is, he wrote the entire Empire Strikes Back script from memory to save George Lucas time in a recent excursion in time (it makes more sense if you watch the show). Despite being much of the comic relief on the show, Hurley continues to be one of the most important characters to its development. Is he crazy or gifted? What do his numbers mean? There is no doubt that this geek is the heart of the show.

If you’ve read my ‘Best Canceled Tv Shows’, you’ll know that I consider this one of the best shows to ever be canceled. One of the many reasons for it is these three little dweebs. The best of which was Martin Starr’s Bill Haverchuck. I couldn’t help but think that Starr looked like a really geeky version of Leonard Nimoy. Go ahead, compare pictures of Nimoy in his old age to Starr in his Haverchuck glasses, and you’ll quickly see my point. I could never help but grimace at many of the situations these guys went through. I don’t know if they hit too close to home or it just sucks to see someone get embarrassed all the time. Needless to say, many of the most memorable moments from the show were caused by these three characters. Sam Levine gets the geeks last laugh, he was recently one of the “Basterds” in Quentin Taratino’s Inglorious Basterds, which ups his geek cred just that much more. 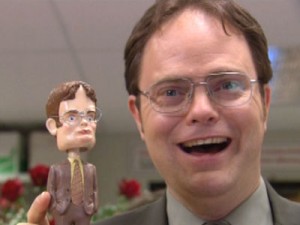 The geek you love to hate, the overbearing beet farmer has the ability to drive you up the wall with his lack of common sense and social skills. His appetite for authority outweighs his distaste for it. He is the all knowing ass kisser of the office. Given any situation to take over the office he will, and he will screw it up royally. Don’t let him institute his own form of worthless currency “Schrute-bucks” if you want to get any work done. While Dwight and Jim might seem to be at odds with each other most of the time, they have enough mutual respect (or something along those lines) to fight a common enemy, such as the other over bearing dork in the office, Andy.

Don’t test this geek though. He interests may include things like Battlestar Galactica, but he also has a purple belt in Goju-Ryu karate.

I find myself connecting to Chuck Bartowski, no not because we are both handsome, but because I once worked in a big box retailer similar to the Buy More. I would have loved for one of my friends to have downloaded an all knowing spy program like the intersect into my head during these times. It would have broken the monotony of selling Monster Cables and extended warranties to people who most likely don’t even know what they are purchasing. If someone told me that I would now be a spy for the US Government at risk to my own life, I’d say yes in an instant. Which shows I have no comprehension of what real danger must be like. Chuck wants nothing more to go back to the peace and quiet of being a normal every day dork, who almost finished a degree from Stanford. What is keeping him there? Well, a girl of course! If you had the chance with a hottie like Yvonne Strahovski you’d probably risk everything too.

Let the “you forgot this” comments commence!