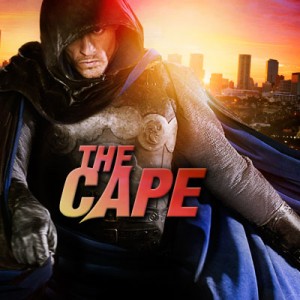 I was excited about The Cape as soon as I had seen the first commercial.  This is mainly due to the fact that I am a superhero fan.  I just think that superheroes are meant to have tv shows.  It allows the characters to develop, and audiences to see a full range of villains.  This is why I love the original Batman and X-Men animated series.  Unfortunately, most animated series are geared for kids too much.  I just love the potential that The Cape has, and I could care less that it borrows heavily from other superheroes.  That’s inevitable.

Since this is the first episode, I am gonna break down each character and in the process will give all the details about the stories in the first two episodes.  I feel this will be easiest.  I will also compare every character to one from the Batman universe since that is what the show reminded me of most.

Vince Faraday is a Palm City cop who is framed for the murder of the new police chief.  Faraday is forced to wear the mask of the villain Chess and is chased through the train yard where it is believed he is killed in an explosion.  Faraday is rescued by a circus group and taught to become a superhero to clear his name.  Faraday takes on the persona of The Cape who is his son’s favorite comic.  Faraday can’t reveal himself still alive because he fears that his wife and son will be killed.  Obviously, he is Batman.  He has no powers and is fighting to save the city.

Peter Fleming is a billionaire owner of the corporation Ark.  Ark has now taken over the city police force and become a privatized police force.  Fleming is also the villain Chess who framed Faraday for the murder.  His goal is to take over the city.  He already has control of the police, and in the second episode he aims to take over the prison, but one man stands in his way.  Chess is Cape’s Joker, just not as great.  Not at all.

Max Malini is the ring leader of a circus group / group of bank robbers who rescue and train Faraday.  Max is similar to Henri Ducard and the League of Shadows from Batman Begins.

Orwell is a computer blogger who reveals all of the cities dark secrets particularly corrupt cops.  The Cape meets her on his first mission, and the two decide to team up.  Orwell appears to have a ton of money and is a technological wiz, but does not want to reveal her reasons for doing what she does.  Orwell is very similar to Oracle.  Oracle is Barbara Gordon after she becomes paralyzed by the Joker.  She sits on the computer at headquarters and talks in Batman’s ear on his mission. 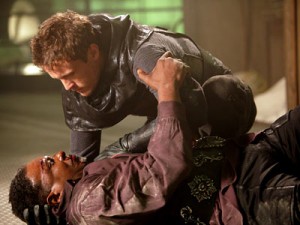 Scales is hired by Chess to take care of a weapons transport.  Scales has a skin condition that makes him look like he has scales.  Creative name.  Scales encounters the Cape in his first mission at the shipyard.  The scene is very similar to Batman’s first mission in Batman Begins.  Scales, as far as this episode, is similar to Scarecrow since he is overseeing the transport.

Cain is a serial killer hired by Chess to take out the one man who stands in his way of taking over the prison system.  Cain is a member of Tarot, a group of villains based on the cards.  Cain specializes in poisons and knives.  Cain reminds me of Victor Zsaz, a hitman for hire.

Patrick Portman is the man who stands in Chess’ way of gaining control of the prisons.  Cain tries to kill him, and Orwell and Cape save him.  Portman reminded me of Gordon.  A government official who is not corrupting and may be teaming up with our hero to bring justice.

Dana Faraday is Vince’s wife who believes her husband is dead, but seeks a job as a defense attorney to continue what her husband was doing, bringing justice.  The character screams Rachel Dawes.  She is the love interest and an attorney.  Double bonus.

I enjoyed The Cape.  The CGI is not great, but that is to be expected with a new show.  I think the show has great potential especially with the introduction of the villain group Tarot.  I can’t wait to see where the writers go with them.  If you missed the premiere last night, you can still catch it tonight on NBC at 8.  If you enjoy superheroes, it will not disappoint.