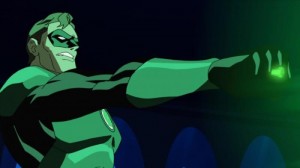 I could go down the line and talk about every single one of the DC animated films.  And eventually I’m sure I will, but I figured since the live action film is coming out this summer then we need to discuss this one first.  I didn’t know much about Green Lantern before this film, and I guess I still don’t really.  But the film gives audiences a great introduction to the world.  Green Lantern: First Flight is a great origin for the character with top notch woice talent, exciting action, and beautiful animation.

The film opens with the origin of Hal Jordan becoming Green Lantern.  They don’t mess around with establishing the character and all that.  They just want to get into the action.  The Green Lantern Corps. is initially apprehensive about a human containing the power of the lantern.  They assign Sinestro to train Hal.  The two soon discover a plot to overthrow the Green Lantern Corps.  But you know what they say: keep your friends close and your enemies closer.

Think of the film as Training Day with lots of aliens and outer space action.  What I love about the film is the viewer gets thrown right into the mix of this huge world that is the Green Lantern Corps.  As always with these films, the voice cast is amazing.  Christopher Meloni plays Hal Jordan.  Victor Garber plays Sinestro who really steals the show.

The action in the film is constant, but the sequence that really stands out is when Hal and Sinestro go into an alien night club to track down mercenary of sorts.  The battle begins there and concludes with a chase through the alien market place.  The animation is really fantastic .

Fortunately for Green Lantern fans there is plenty more to come.  As many of you know, the live action film starring Ryan Reynolds and Blake Lively hits theaters this summer, and Warner Brothers is so show with this film that they have already greenlit a sequel.  Also, DC Animated Films will make an anthology of animated series that will star Abin Sur, Sinestro, Kilowog, and more of your favorite characters from the Green Lantern Corps.  That film, titled Green Lantern: Emerald Knights, will hit store shelves June 7, 2011.