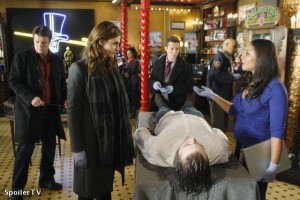 I was excited when I saw previews of this week’s Castle.  I always thought magic was fun so the idea of a murder mystery based around magic is a cool idea.  Also, Gilles Marini, my favorite contestant on Dancing with the Stars that didn’t win, was playing a magician in the episode.  I had high hopes.

Castle and Beckett are put on the case of  a magician, Drake,  found drowned in a water tank at the the magic shop he owns.  A suicide note is on the scene, but Castle and Beckett know better than to believe that.  Finger prints on the note lead the two to a struggling magician who supplied Drake with some C4 explosives.

The C4 may have been for Tobias Strange, the “Johnny Depp of magic”.  Tobias tells them he was not sure what Drake had planned, but they should check out Drake’s workshop for more information.  When they get there, they discover wheelchair marks and ripped pages from a magic book.  Suddenly, Drake’s twin brother walks out of a hidden door.  Beckett does not think he is a suspect.

The wheelchair marks lead them to Thaddeus Magnus who was hired to make a mechanical arm for Drake so that he could be paid a fortune to “get away with murder”.  Castle and Beckett believes that Drake was hired to kill billionaire Christian Dahl.  Dahl’s wife is the prime suspect since she was in danger of losing a fortune due to her unfaithful ways.  But Mrs. Dahl reveals that her husband was in trouble with the SEC and had no fortune.

After reviewing the tape of Dahl leaving on a jet plane, Castle and Beckett unlock the case.  Dahl hired Drake to make him disappear.  Drake replaced Dahl with a mechanical dummy and wired the plane with the C4.  After the plane took off, it exploded leaving Dahl to be believed dead.  Dahl then took out the only man who knew he was still alive, Drake.

The episode ends with Castle, Beckett, and Ryan joking about how Lanie and Esposito are still sneaking around with their love affair thinking that nobody else know.  Beckett overhears Castle break things off with his ex Gina, but Beckett is still dating a doctor so the two won’t get together just yet.

I was a little disappointed with the episode.  The mystery and the revealing of what really happened was very well done as always, but what I really love is the humor between the two leads.  I didn’t get as much comedy as I normally get which just left me wanting more.

I also found it curious that Castle made a comment to Esposito about never dating someone you work with cause it never works out.  At the time, Esposito was worried that Castle knew his secret, but Castle was only talking about his relationship with his ex-wife.  But I worry that maybe it is just foreshadowing his relationship with Beckett.  These two have to get together soon.  We are 3 seasons into this show.  It’s time.

What did you think of the episode?  Let us know in the comments below.