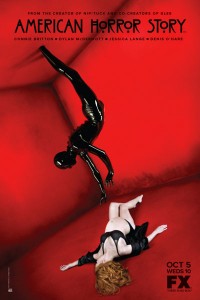 Ryan Murphy and Brad Fulchuk managed to make one of the most popular television shows of this generation with Glee, and now it seems lightening really can strike twice. Tonight marked the debut of the eagerly awaited horror entry from writing/producing team Ryan Murphy and Brad Falchuk, and it was worth the wait.  American Horror Story teased audiences with visually mind-bending trailers for what is essentially a supernatural horror TV show. While the pilot wasn’t necessarily as “scary” as a $50 million dollar film from a major studio, it certainly held it’s own against most of the crap horror fans have been getting in recent years. Part of what makes this show so successful is it’s cinematic feel. Every great horror film has a signature tone that adds to the sense of dread beyond the superficial boo’s and gotcha moments and American Horror Story managed to capture that in about an hour.The pilot of American Horror Story is special because it takes extremely familiar elements (family moving into a haunted house) and makes them fresh and original. The episode opens with an extremely familiar story element: two shit-disturbing kids venture past the eerie warnings of a neighbor girl to vandalize the big spooky house, but with American Horror Story it feels different. It feels like something we haven’t seen before. The story involves a old neighbor who’s privy to the secrets of the house, a maid who worked for the home’s previous occupants and yet even with these standard characters, it feels more important. It feels more important because rather than using these characters to simply inform the audience of a home’s 20 year history in five minutes, the format of a television series allows these characters to become fully formed. It is made abundantly clear that every character in this series has a back story, no one is completely who they appear to be.

While some of the more dramatic scenes in the episode fall flat, the acting is spectacular. Dylan McDermot is exceptional, Connie Britton is mesmerizing and Jessica Lange steals every scene she is in. These characters are hypnotic. American Horror Story takes the otherworldly unsettling nature of a show like Twin Peaks and makes it both entertaining enough and accessible enough for mainstream audiences.

The true test will be seeing if American Horror Story can keep up this level of quality for 13 or more episodes. As it stands, this ranks among the best hours of television produced this year. For fans of the genre or fans of quality television, do yourself a favor and watch this show.