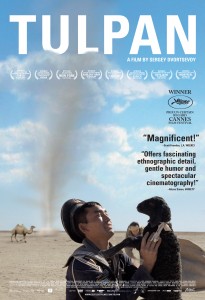 Sergei Dvortsevoy makes his narrative feature debut out of Kazakhstan is an interesting look into a sheep herder’s life and the battle between the young and old school’s of thought in society in the country.

The film opens with the attempted arrangement of Asa, a young soldier looking for a start to his new life, and Tulpan, an elusive daughter and the apparent last eligible woman around for him. The rub is that he can’t get his own heard until he is married, which would allow him to fulfill his dream of living as a high class rancher with a loving wife, but Tulpan and family seem untaken by him. So instead of moving on, Asa is thrown back into a life of near servitude to his brother in law who tends his own flock while Asa’s sister raises the kids at home. Not very good at being a shepard, Asa is constantly at ends with his brother in law, Ondas, and putting strain on the families home life as long as he is a guest in the house. The film plot grows as all of Ondas’ sheep begin having still birth’s and when that puts a threat on his business and the family’s hopeful move; he can’t afford any mistakes for Asa. Added to Asa’s current troubles is his friend Boni is constantly pressuring to move with him into the city and live a life of more excitement and more women to boot.

How things fold out for everyone is the crux to this story as they struggle through adversity and try and get their lives back on track. The thing is, the story sounds sad, but it is told surprisingly up beat and has a sly sense of humor about things from time to time. The film is shot extremely well and there are some impressive single takes that kind of take you everywhere and stay with the action for a long time. It’s never fancy technically, but keeps the actors working at a high caliber while drawing out the tension of a few later scenes in the film around the birthing of a couple of lambs.

The film is subtle and quiet and is full of extended takes, maybe a bit too lingering at times, but it does a good job at setting up and putting us in the same kind of isolation the characters are in. The film also gives us a really interesting take on the family life of a herder as well. All under one roof, with kids of varying ages, I think I would go mad out there. It is interesting to see how all of the family patrons pass the time and a bit unfortunate for us to have to endure the screeching singing of the family daughter.

The actors in the film are all first timers or very inexperienced and you would never really know. Askhat Kuchencherekov plays Asa and he brings the charming bumble head to life. As he tells stories of his navy past, tries and herds the flock, or do his ear exercises you can’t help but smile at him. He also really nails the scenes where he pours his heart out to Tulpan and shows great focus and ability in his big final scene with the birthing lamb. Ondas Besikbasov is also very good as the brother in law Ondas and he nails the subtleness of the character. A loving and caring husband and father is always right underneath the surface of the hardened and controlling boss he has to be to Asa and his kids when at work. Besikbasov was the most impressive of the cast and I hope he finds himself some more action work down the line. Last to get some mention is Tulepbergen Baisakalov as Boni who is played to dimwitted perfection. While not playing him like an idiot, there is just enough silliness and hopeless dream to him to make him laughable yet sincere in his desires and hopes for himself and Asa.
In the end, Tulpan is a nice little foreign flick that is a bit deeper then it might seem on the surface. Engaging just from being a look into a world we can’t really imagine, there is also a compelling story that arises among a number of quality performances. Sweet and good hearted, the film has its emotional ups and downs but will leave your feeling a bit elated and hopeful by the end. A bit of editing and maybe a little more plot might have helped this picture be even better, but it still stands as a fine piece of budget international filmmaking that can really when you over even with the simplicity it has to offer.