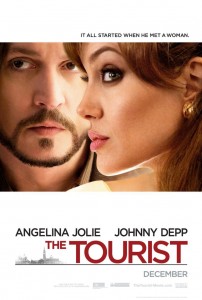 Imagine a movie, imagine that movie stars two of the hottest commodities in Hollywood and add a sensual, somewhat dark French-thriller plot. If you did that, you would have the trailer for The Tourist, and it would sound like a pretty good movie, right? But then if you take away the words “dark” and “thriller” and realized that those sought after actors were actually last minute replacements, then you would have the actual movie.

The Tourist stars Angelina Jolie and Johnny Depp in what appears to be a very promising plot. Jolie plays Elise, a beautiful and mysterious woman who ensnares spy-fiction fan Frank Tupelo (Depp) into his very own web of international crime and intrigue. Under the orders of Chief Inspector Jones (Timothy Dalton) Scotland Yard’s John Acheson played by Paul Bettany (The Da Vinci Code, A Beautiful Mind) tries his best to keep up Elise and the man he believes she is connected to…Alexander Pearce.

For what sounds like a fantastic plot on paper, the execution of it all leaves a little something to be desired. Perhaps the problem is with expectations. As stated before, the premise and the trailer and two actors who typically take on fairly meaty roles suggests that The Tourist would at least have hints of substance, instead the audience is left with a beautiful and…fun movie that is essentially summer action fluff – think The Italian Job meets Knight and Day.

The problems with the film almost assuredly were the result of apparently several casting and directorial issues during pre-production. Depp’s role was reportedly originally slated for Tom Cruise, who was replaced by Sam Worthington who dropped out over “creative differences” and ultimately was replaces by Johnny Depp. Angelina Jolie’s character was also apparently intended for someone else…none other than Academy Award winning actress Charlize Theron. The director, German born – Florian Henckel von Donnersmarck (Director of the Academy Award winning film The Lives of Others) also was a replacement and who he himself dropped out at one point, only to resume his directorial role later on. It seems that for whatever reason, no one wanted to be a part of this film.

The Tourist certainly has its strong points. The visuals are simply stunning, whether that describes the beautiful European vistas, lavish homes and hotels or the lead actors, there is definitely eye candy everywhere. The action scenes are exciting and even the dialogue has some charm. However it seems that for every peak there is a valley. The Tourist like its pre-production story seems to have a bit of an identity crisis. At times the film feels intense and brooding, other times it feels like a carefree romp through the waterways of Venice. The dialogue and script have their moments of wit and charm while other parts feel like a reject Bond script. The Tourist is by no means a perfect film, however going in with realistic expectations; it may be just the way to end your night or your week

If you just can’t get enough Johnny Depp or are feeling “Depp-rived” (sorry, couldn’t resist) then check out Tim’s Actor Spotlight of the Week.