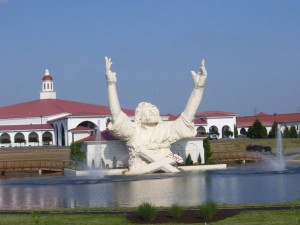 Yesterday in Monroe, Ohio,  a 62 foot tall statue known as “Touchdown Jesus” was hit by lightning and was set ablaze.

The statue, located at the Solid Rock Church, is officially named “The King of Kings,” but was given the nickname due to the position of the arms that resemble a touchdown call from a referee in football.  The damage to the statue, as well as nearby parts of the church, was terrible.  But officials say that they will resurrect the statue, and repair the rest as well.

Watch video and pictures of the Touchdown Jesus statue below: