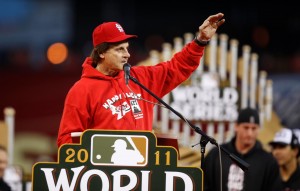 At a press conference called by the St. Louis Cardinals this morning, manager Tony La Russa announced his retirement after 33 years of managing in the major leagues.

The last 16 years were spent with the St. Louis Cardinals, during which time he amassed a record of 1408-1182 during the regular season. The Cardinals also won three National League pennants and two World Series titles.

I will post more thoughts this afternoon when I get a chance to. First two thoughts:

1. This will possibly (note: previously I wrote undoubtedly) affect the negotiations for Albert Pujols. Although Pujols will be signing a long-term contract and would most likely have been here longer than La Russa, I think there’s still a human element to it.

2. More importantly, I hope Cardinals fans can respect what Tony’s done for this organization. I’ll try to put his job into perspective later, but he’s one of the most influential managers in history.