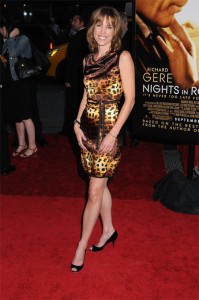 Hannah Storm looks pretty good for 47 to me.

ESPN’s Tony Kornheiser is in hot water after some remarks made on his radio show about ESPN Sportcenter’s anchor Hannah Storm’s outfit.

The remark that has him in trouble is,“Hannah Storm in a horrifying, horrifying outfit today. She’s got on red go-go boots and a catholic school plaid skirt … way too short for somebody in her 40s or maybe early 50s by now.”

He then added, “She looks like she has sausage casing wrapping around her upper body,” he added. “I know she’s very good, and I’m not supposed to be critical of ESPN people, so I won’t … but Hannah Storm … come on now! Stop! What are you doing? … She’s what I would call a Holden Caulfield fantasy at this point.”

Kornheiser offered an apology the next day. “I apologize, unequivocally … I’m a sarcastic, subversive guy … I’m a troll, look at me. I have no right to insult what anybody looks like or what anybody wears. That, I think, should go without saying,” he said.

An ESPN spokesperson has come out and said that Kornheiser will be suspended “for some time”.

Overall, some stupid stuff was said, and he was really unprofessional, but I couldn’t help but laugh.