Tom Cruise Will Be Back For “Mission Impossible IV” 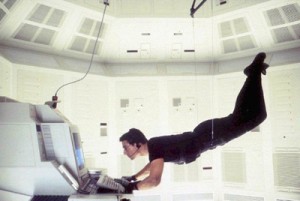 Tom Cruise and J.J. Abrams will be teaming back up again to produce Mission Impossible IV, set for a release of Memorial Day 2011. J.J. Abram’s Bad Robot productions will be producing the film, and will star Tom Cruise as Ethan Hunt again. Josh Applebaum and Andre Nemac are writing the film based on a story idea by Abrams and Cruise. Nothing has been released on what the film will focus on. (Saving the world from Scientology maybe?)

The franchise has grossed over $1.4 billion dollars worldwide, but with the still recent fall from grace of Tom Cruise, the franchise may have its hardest obstacle yet. Cruise might have a chance to win favor back with his next film with Cameron Diaz, Knight and Day. J.J. Abram’s star continues to rise, and I’m almost positive that they will be pasting his name all over this with things like, “From the director of Star Trek…”

The film is set to go up against The Hangover 2, which I’m thinking will give it a bigger run for its money than people might think. Mission Impossible IV should have a decent opening, but I’m not sure if the series needs a fourth film, especially since I think a lot of people were tired of it by the second film.