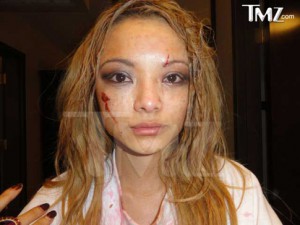 F*ckin’ lawsuits, how do they work?

Reality Star and Gremlin look-a-like, Tila Tequila, was assaulted by concertgoers while onstage at Gathering of Juggalos, a music festival in Hardin County, IL.
“Tila has gotten medical care for the horrific attack that happened to her this weekend at the Juggalos event in Chicago and is in good hands right now and under medical direction,” her manager said in a statement. “She would like to thank all of her fans for all the love and support that they have given.”

“Thank you everyone for your support,” Tequila said on her Twitter account. “The people at Juggalos behavior was disgusting and I am filing a suit against Them now. Thanks 4 ur luv. Pretty soon the owners who run the Juggalos will be bankrupt. My attorney Alan is already on it. This is disgusting behavior from men. But to all of my fans, I appreciate your outpour of love and support! Xoxo”

The reality show star was performing on stage, and even flashed the audience. The crowd pelted her with numerous items causing lacerations and bruises across Tequila’s face. The crowd then chased her off stage after her performance, and broke the windows on her trailer, and damaged the SUV she left in as well.

I’m really on the fence about this one. On one hand I think most of ICP’s fans, AKA Juggalos, are functionally retarded. (Seriously, this is the music they devote their life to.) On the other hand, Tila Tequila has to be one of the most annoying people on the planet. I’m just not a big fan of people who whore themselves out for fame, and Tequila is about as bad as they come.