If you still haven’t purchased your tickets to the midnight showing of The Dark Knight Rises next week, there is still time! Grab your seats at the Great Escape Gravois Bluffs here. 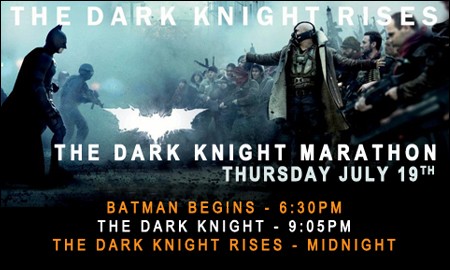 Note: Midnight shows are filling up quick for The Dark Knight Rises next Thursday, July 19 at 11:59pm. Click here to purchase tickets for the Great Escape Gravois Bluffs in Fenton.

Our friends at the Great Escape Gravois Bluffs were kind enough to give us a few pairs of tickets for the midnight show to our biggest fans! In order to enter the contest, “like” ReviewSTL.com on Facebook – then leave a comment below telling us why you are the biggest Batman fan in St. Louis. You can post a story, link to a picture of you with a Batman logo shaved into your hair, or whatever it takes to prove you are Batman’s #1 fan!

To make sure you won’t miss out on The Dark Knight Rises, make sure to buy your tickets here before they are sold out!