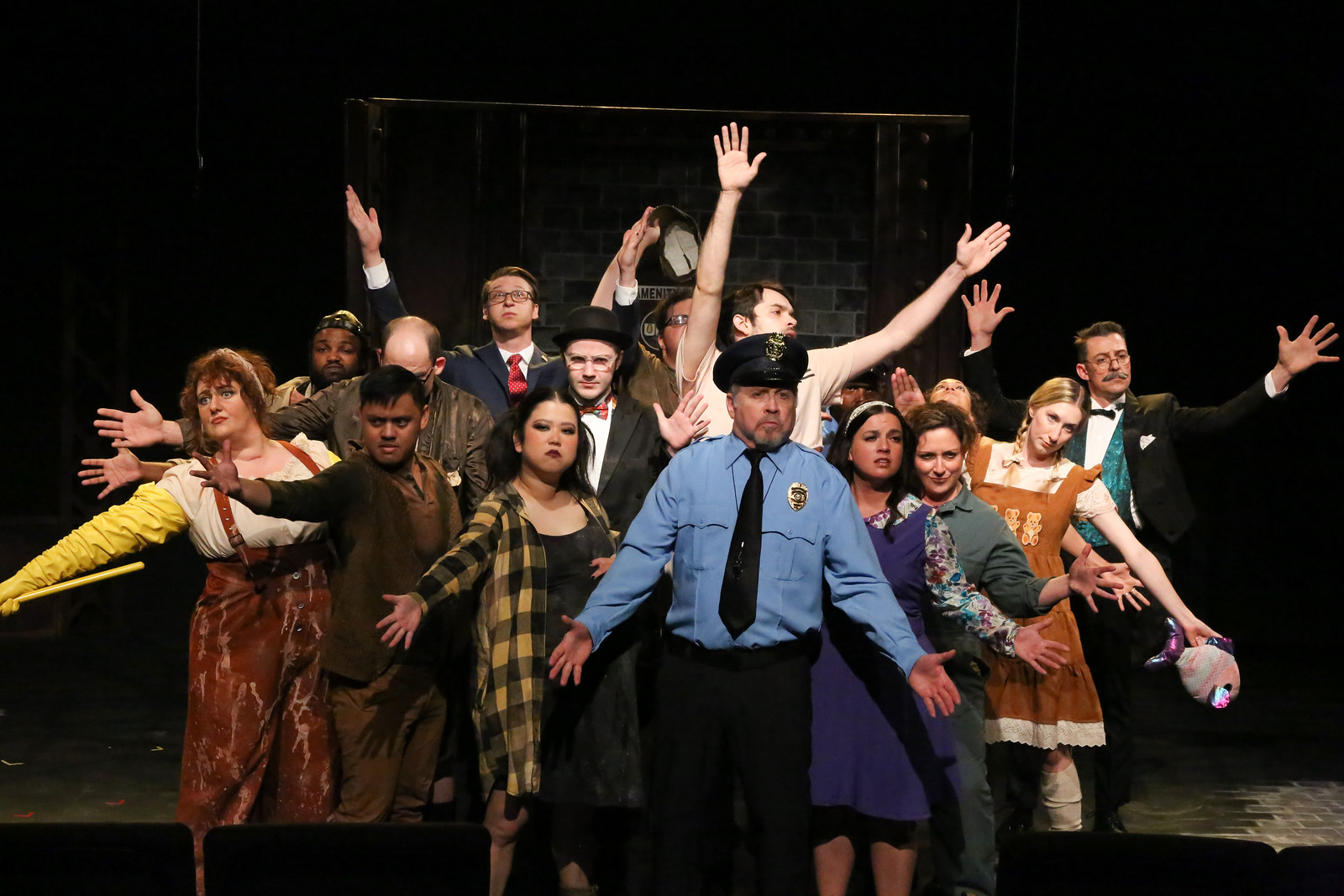 Urinetown is the meta, satirical musical we need right now.

Created by Greg Kotis (Book/Lyrics) and Mark Hollmann (Music/Lyrics), the story takes place in a dystopian future (an eagle-eyed Scott Miller spotted the year 2027 on a prop in the original Broadway production) where a decades-long drought has eliminated private restrooms. Now all public restrooms, known as “public amenities,” are controlled by UGC (Urine Good Company) and cost to be used. Citizens scrape together every last penny to use them, and if they urinate in public they are sent to the mysterious “Urinetown” – never to be seen or heard from again.

The musical begins with Officer Lockstock (Kent Coffel) greeting the audience, and explaining the difference between Urinetown the musical and the place to Little Sally (Jennelle Gilreath) and the audience in the opening number, “Too Much Exposition.” Right from the start, it’s clear that we are in for something special. Conventional musical rules are thrown out the window, and the show’s self-awareness leads to a fun and unique experience throughout the production.

Bobby Strong (Kevin Corpuz) works for Mrs. Pennywise (Sarah Gene Dowling) at Public Amenity #9, where he is forced to turn away his father (Zachary Allen Farmer) who can’t pay the fee. This leads Old Man Strong to urinate in public, earning him a one-way ticket to Urinetown. Bobby questions whether he did the right thing, and has his eyes opened when he meets Hope Cladwell (Melissa Felps) – the daughter of UGC CEO Caldwell B. Cladwell (Todd Schaefer). She sings to Bobby, “Follow Your Heart,” which leads to a revolution after UGC raises prices on their amenities. Hope is trapped between following her heart, and her father’s stranglehold on the population.

The premise of the show is ridiculous, and the show admits as much during the opening number. But with the way the world is heading, it doesn’t seem as unbelievable as it might have seemed even 20 years ago when the show was written. It’s of course satirical, but at the same time – if a company could find a way to get away with charging people to urinate, would you put it past them? It’s a sharp commentary on capitalism, politics, and the ethical ambiguity that blurs the two together.

The music in the show is so good, that I had to turn the original cast recording on as soon as I got back into my car. The songs are as catchy as they are hilarious, with numbers like “It’s a Privilege to Pee,” “Don’t Be the Bunny,” and “Tell Her I Love Her” among others leaving the audience in stitches. Urinetown likes to deconstruct the medium, poking fun at many popular songs and conventions that fans of musicals will be sure to pick up on.

Corpuz is terrific as the bright-eyed Bobby Strong, with a genuine portrayal of youthful innocence and hopefulness. The actor has appeared in several New Line shows, including his fantastic role of Michael in Be More Chill. It’s great seeing him have a chance to shine in the lead role, and he doesn’t waste the opportunity. Corpuz displays a natural likability and earnestness, making it impossible not to root for his character.

Another New Liner, most recently seen in Head Over Heels, Melissa Felps is wonderful as the kind-hearted Hope. Her cheery disposition lights up the stage, while balancing the nuanced portrayal of a character struggling with her duty to family and moral obligations. The actor has a great voice and a talent for comedy. She and Corpuz are great together on stage, and watching their characters’ complicated relationship evolve is wildly entertaining.

The entire cast is fantastic, with many notable characters. Coffell and Marshall Jennings make for a hilarious duo as Officers Lockstock and Barrel. Gilreath is having a lot of fun as Little Sally, and so is Dowling as Pennywise.

Todd Schaefer as Mr. Cladwell is like a cartoon villain brought to life, and I mean it in the best way possible. The character’s office is decorated with paintings of huge dollar signs. His mustache-twirling, not-so-subtle evil ambitions are endlessly entertaining, while scarily believable in this portrait of soul-crushing capitalism. In a show full of silly characters, he’s one of the most fun to watch.

More New Line favorites show up in fun roles, like Farmer as Bobby’s father who is frequently appearing to him in visions. And Grace Langford as part of the town mob, who is always a delight whenever she shows up.

Co-directors Scott Miller and Chris Kernan (who also handles the choreography) stage the show in a fun and unique way, putting the audience right in the middle of the action (as often experienced at New Line). The “Act I Finale” number is exhilarating as the cast runs around the audience, singing and dancing as they go up and down the aisles. It was a terrific experience to be an unsuspecting part of. One of the “dramatic” scenes even took place in a row of seats, which elicited many laughs. The point is, you never know quite what to expect from this show – making for a unique evening of musical theatre.

Schaefer also doubles as scenic designer, crafting a fascinating look at this bleak future. He makes wonderful use of a rotating stage that easily transitions from the lush interior of UGC to the sad streets surrounding Public Amenity #9. The detailed sets capture an eye-opening look at a future yet to pass – a clever commentary on the depths businesses are willing to sink to.

Urinetown is packed full of funny moments and memorable musical numbers, while at the same time begging the audience to think about how close some of the absurdity resembles the current state of the world. A biting satire and social commentary that never ceases to entertain, the show is non-stop fun that also seems more important than ever.