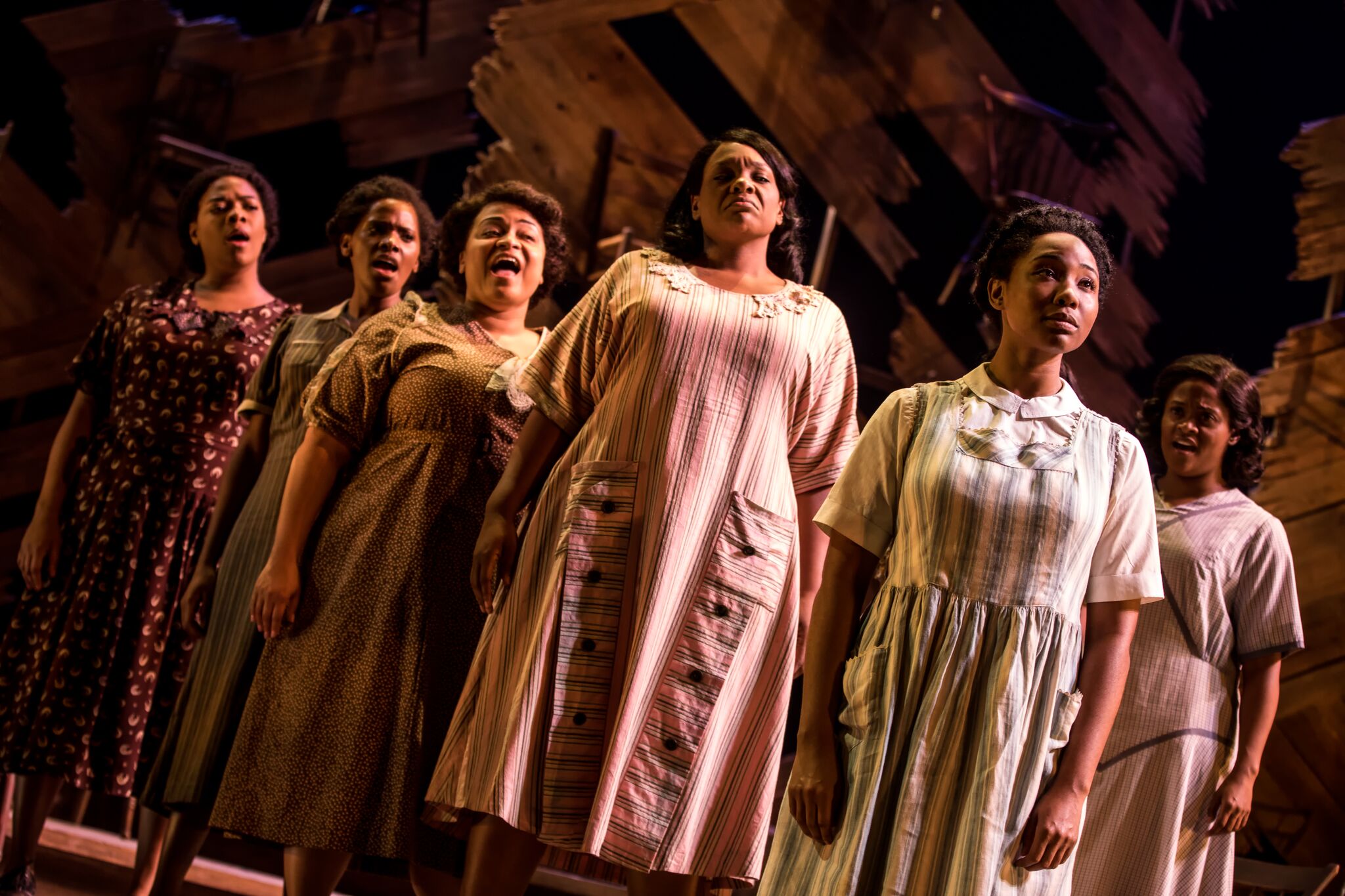 The Color Purple is a story which has touched countless readers, filmgoers, and theatre patrons since since 1983. Based on the Pulitzer Prize-winning novel by Alice Walker, the show won the Tony Award for Best Musical Revival in 2016. Audiences have the chance to see this new production during the national tour, making The Fabulous Fox in St. Louis its latest stop through April 1.

Audiences may be familiar with the film adaptation directed by Steven Spielberg in 1985, which starred Oprah Winfrey, Whoopi Goldberg, and Danny Glover. In 2005, Winfrey was a producer on the musical which was adapted for Broadway. The show was nominated for 11 Tonys, with LaChanze winning Best Actress, and ran for more than two years.

In 2015, the Menier Chocolate Factory in London brought its production to Broadway, where it was met with much acclaim. Although the show retains the songs from the original production, the set is completely different – stripped down to not much more than a few walls of chairs. Yet for a show with such impactful writing, the minimalist scenic design allows the performances to set the stage. The Color Purple is a powerhouse of acting and singing, which truly shine when you have nothing else to draw your attention away. 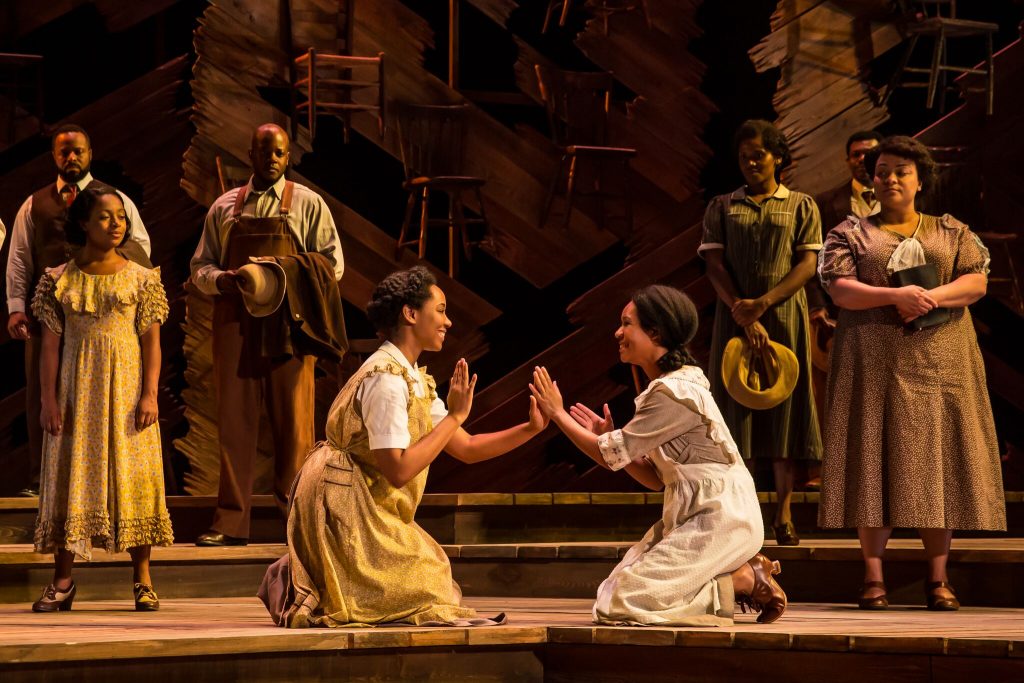 The year is 1909. Celie (Adrianna Hicks) is a mere child of fourteen, who is pregnant for the second time through no fault of her own. Her father is abusive, giving her up for marriage and even throwing in a cow just to be rid of her. Unfortunately for the poor girl, it is out of the frying pan and into the fire, as she marries an even more terrible man – Mister (Gavin Gregory). Leaving behind her younger sister Nettie (N’Jameh Camara), Celie is forced to lead a miserable life – losing all contact with Nettie and believing her to be dead. Meanwhile, her husband is more interested in another woman – Shug Avery (Carla R. Stewart) – who care’s more for Celie than she does for Mister. The story is about her struggle to overcome all of these obstacles, while keeping her faith that a better life is coming.

Adrianna Hicks is mesmerizing in the role of Celie, a performance which makes it impossible not to sympathize with the character. It’s all about the facial expressions as Hicks captures the spirit of a woman who is going through the worst life has to offer – and staying as strong as she can. And her voice is amazing, perfectly capturing the emotions of the oppressed character. While the first act is more about her nuanced performance, the second act is full of earthshattering monologues and vocal deliveries. The actor really knows how to land the proverbial exclamation point when she opens her mouth, causing the audience to erupt with applause throughout the evening.

The ball at the other end of Celie’s chain is Mister, played masterfully by Gavin Gregory. When you really want to hate a character is when you know the actor is doing their job right, and Gregory is the boss in that regard. Mister is a horrible person – a product of his own upbringing – and makes life a living hell for everyone around him (when you see his father, played by C.E. Smith, it all comes together). The actor captures everything that is awful about the character and brings it to the stage with gravitas. Mister goes through an interesting development in the second act, and Gregory’s performance is nothing less than stellar. His solo song, “Celie’s Curse,” is an emotional, awe-inspiring performance. 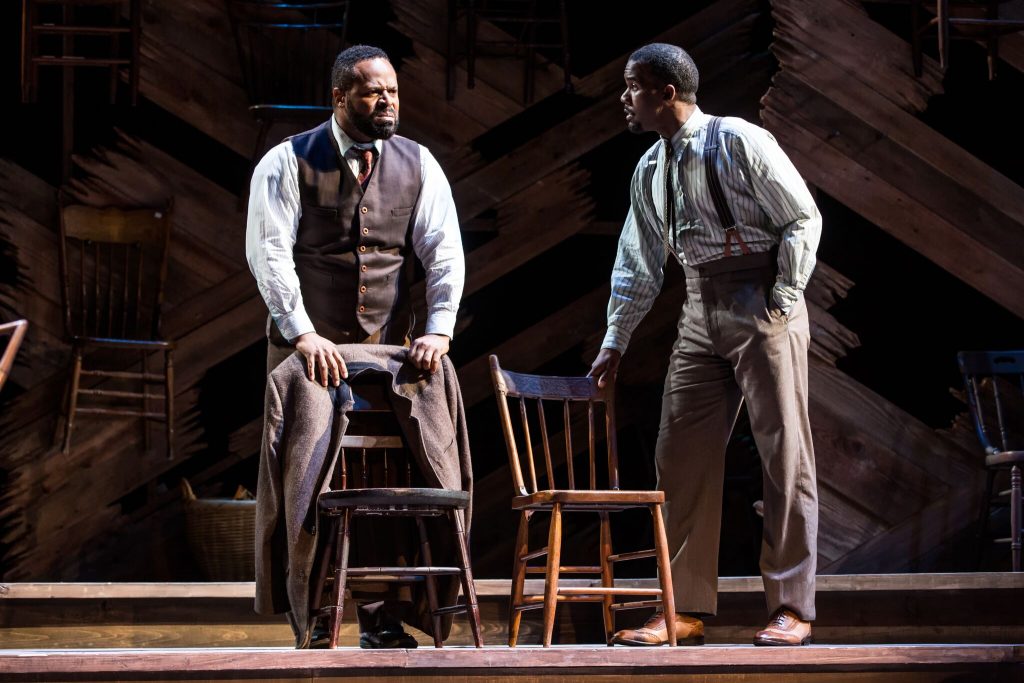 Carrie Compere and J. Daughtry are terrific as Sofia and Harpo. Their characters provide welcomed comedic relief from the mostly-serious subject matter,  while both actors excel at the dramatic when necessary. Compere’s confidence is fierce as a rare woman who stands up to her husband or anyone else who tries to stand in her way. She is one of the fan favorites, voted on by applause. Daughtry plays the submissive Harpo as somewhat of a lovable goofball, whose good intentions outweigh the character’s poor decisions. The two have great chemistry as they bicker and butt heads for most of the show.

Shug Avery lives on her own planet, where everything revolves around her. You need a larger than life personality to play Shug, and that is what you get with Carla R. Stewart. She steals the show with numbers like, “Push Da Button,” and “The Color Purple.” She has a fantastic duet with Hicks during, “What About Love?” near the end of act one.

The musical features a great ensemble, with many of the actors in multiple roles. During the performance I attended, Gabrielle Reid played both Squeak and Olivia. She was hilarious as Squeak, who becomes a love interest of Harpo and bone of contention for Sofia. The charismatic actor garnered lots of laughs with her portrayal. The three church ladies (played by Bianca Horn, Nyla Watson, and Nikisha Williams) were lots of fun as they sang their gossip. 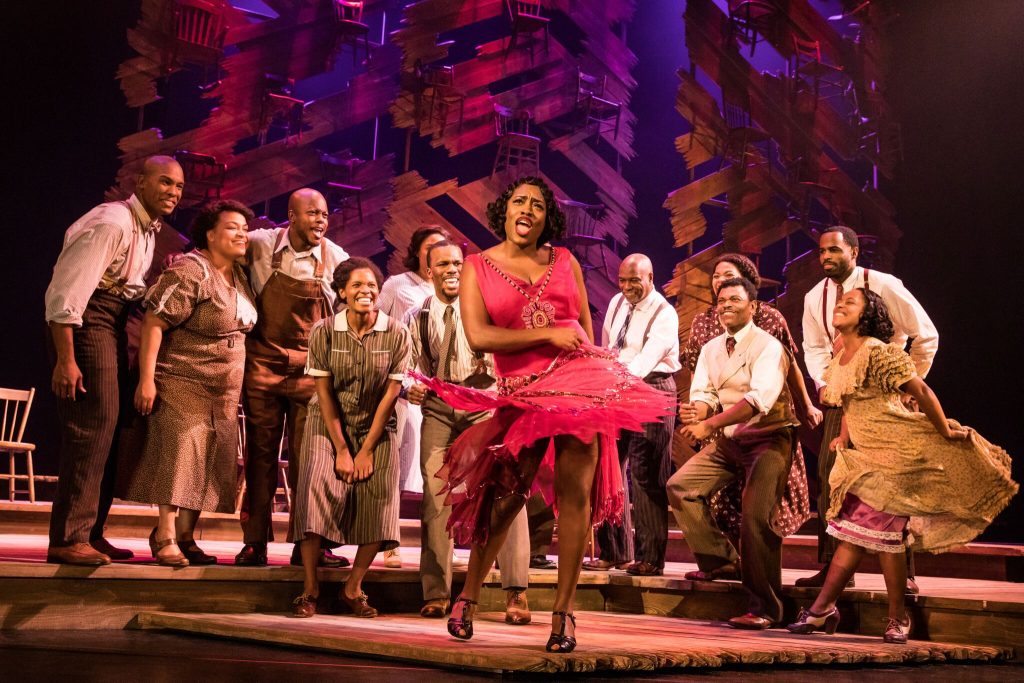 Director John Doyle has staged an incredibly effective musical, filled with heartwrenching performances and fantastic songs. The story is full of uncomfortable situations, and difficult struggles. Yet through the faith and perseverance of Celie, hope never leaves – and pays off at all the right moments. It was a smart move to simplify the sets and props, and replace them with more focus on the powerful book and lyrics.  The Color Purple takes audiences on an emotional journey – one which they will not soon forget.

The Color Purple plays The Fabulous Fox March 20 – April 1. Tickets are available via MetroTix. For more information, visit fabulousfox.com or the official tour site at colorpurple.com.