Theatre Review: Muny Will Have You ON YOUR FEET! 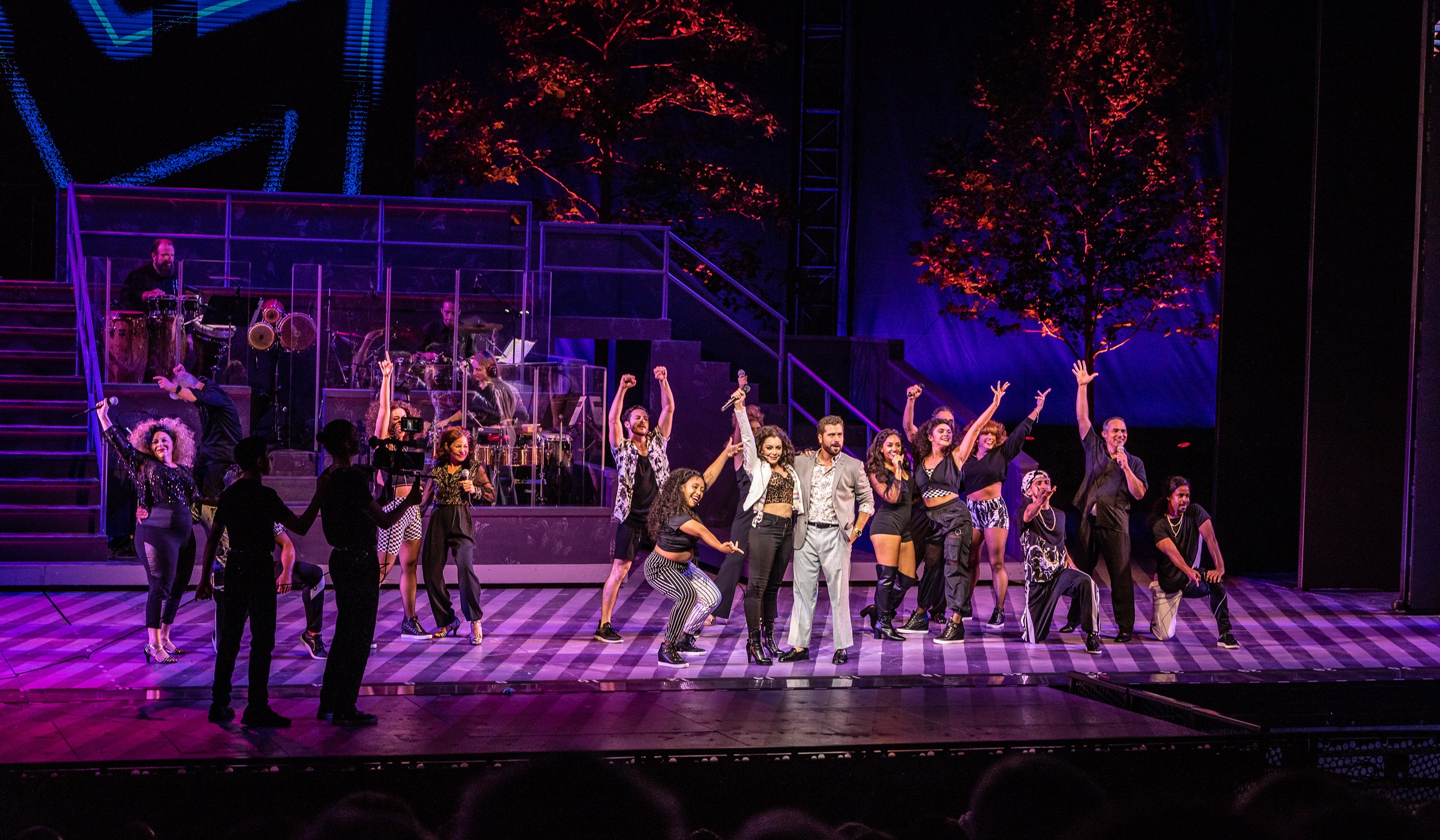 Now through August 27, audiences can experience the inspiring story and hit songs of Gloria Estefan at The Muny.

Gloria (Arianna Rosario) had a passion for writing and singing at a young age – something her father (Martín Solá) and grandmother (Alma Cuervo) encouraged. However, her mother (Natascia Diaz) wanted her to focus on her studies and future career as a psychologist. But when Gloria is introduced to the lead singer of the Miami Latin Boys, Emilio Estefan (Omar Lopez-Cepero), her dreams of being a musician become a reality.

If you are a fan of jukebox musicals – especially Jersey Boys – On Your Feet! recalls the rise of Gloria Estefan in a similar fashion. The story is told through Gloria and Emilio singing their biggest hits, beautifully wrapping pivotal life events around each song. In addition to the great music, the show has lots of laughs and plenty of moving moments.

Rosario, a talented singer and dancer, is fantastic in the lead role. She passionately embodies the essence of Gloria and sounds a lot like the chart-topping performer. She has a keen sense of the dramatic as well, bringing truth to the obstacles Gloria was determined to overcome throughout her career. As her character grows, you see her body language change – in the way she carries herself, and stands up for dreams. She has the charisma and energy you would expect from a star, and the mini-concert at the end of the show makes full use of both.

Lopez-Cepero has great chemistry with Rosario, and it’s fun to watch as the talented couple for their relationship. You feel the passion in the performance come through as Emilio is determined to make Gloria a star – never afraid to fight for what he believes in. One moment Lopez-Cepero is delivering comedic lines, and the next he’s giving a brutally honest depiction of what an American looks like, or what family means to him. He has pitch-perfect comedic timing, but is also able to hit those serious notes.

The entire cast is wonderful, delivering lots of heart and levity throughout. Solá delivers touching moments opposite both Rosario and Isabella Iannelli, the talented actor who plays young Gloria. Diaz administers a heartbreaking dose of reality, through a story relatable for many, and is an exceptional talent in her own right when it comes to song and dance. And Cuervo, who plays Abuela Consuelo, serves up plenty of laughs alongside a heartfelt, encouraging lesson.

The Muny does not disappoint when it comes to dance numbers, and On Your Feet! features dazzling numbers choreographed by William Carlos Angulo. They make full use of a large cast and ensemble, bringing to life the impact Gloria has had on all walks of life. In Cuba, the entire community sings and dances along; people join in from all over to do the conga; and the aforementioned “Megamix” at the end of the show is just as exciting as a live concert. The dancing is top-notch from beginning to end.

Director Maggie Burrows, along with her fantastic cast and crew, has ensured Gloria’s story is told with the respect it deserves- while also producing an energetic and joyous show with a beautiful message. On Your Feet! is more than just an excuse to play hit songs; the musical is a beautiful story about following your dreams, never giving up, and what it means to be family. By the end, you’ll no double be literally on your feet, dancing along with thousands of others having a great time in Forest Park.