Theatre Review: JERSEY BOYS at The Fabulous Fox – Oh, What a Night! 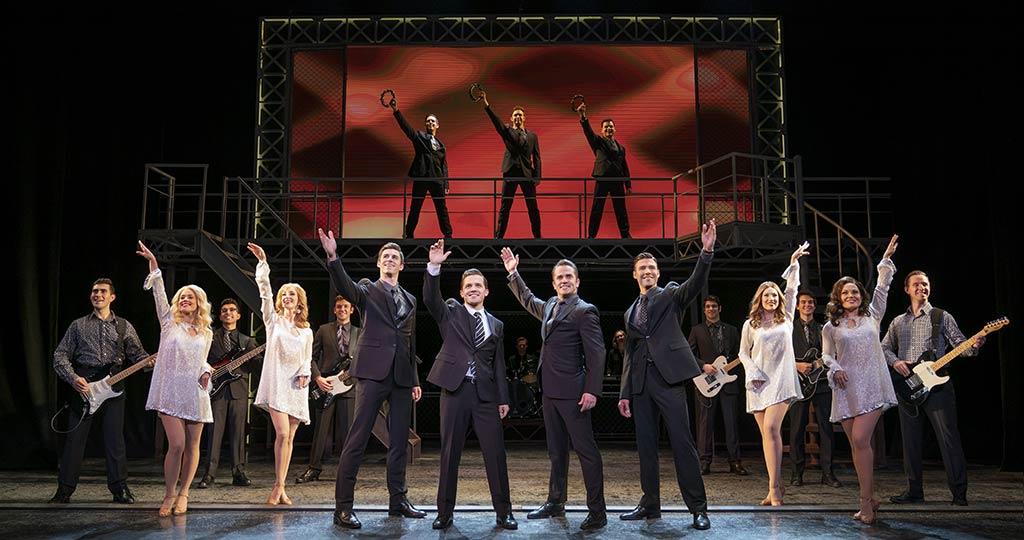 Some of the most fun musicals out there are jukebox musicals. You go to hear music that you love – while being entertained by a fun story that pieces all of the songs together.

What I adore about Jersey Boys, the story of Frankie Valli and the Four Seasons, is that the musical lets the group’s songs tell their own story. Not only do you get to hear hit after hit, but the story is fascinating, endearing, and endlessly fun.

Bob Gaudio, one of the founding members of The Four Seasons, commissioned Marshall Brickman and Rick Elice to write the musical this way. And it was a great call, earning the show 4 Tony Awards including Best Musical in 2006.

I’ve seen the show a few times before, and this cast is easily one of the best. Jon Hacker (Frankie Valli), Corey Greenan (Tommy DeVito), Eric Chambliss (Bob Gaudio), and Michael Milton (Nick Massi) are all terrific – not only with their acting, but their singing sounds so much like The Four Seasons. This may be the closest the cast has ever sounded to the real deal. I instantly turned on one of the group’s albums, and the similarities were undeniable.

Each of the members gets a chance to tell the group’s story in the show, but the main narrator is DeVito. Greenan plays him with a confidence and swagger that always seems natural for the character. This may be my favorite portrayal of the character yet.  In fact, all four of the lead actors make what they are doing look easy – a testament to the perfect casting for this national tour. 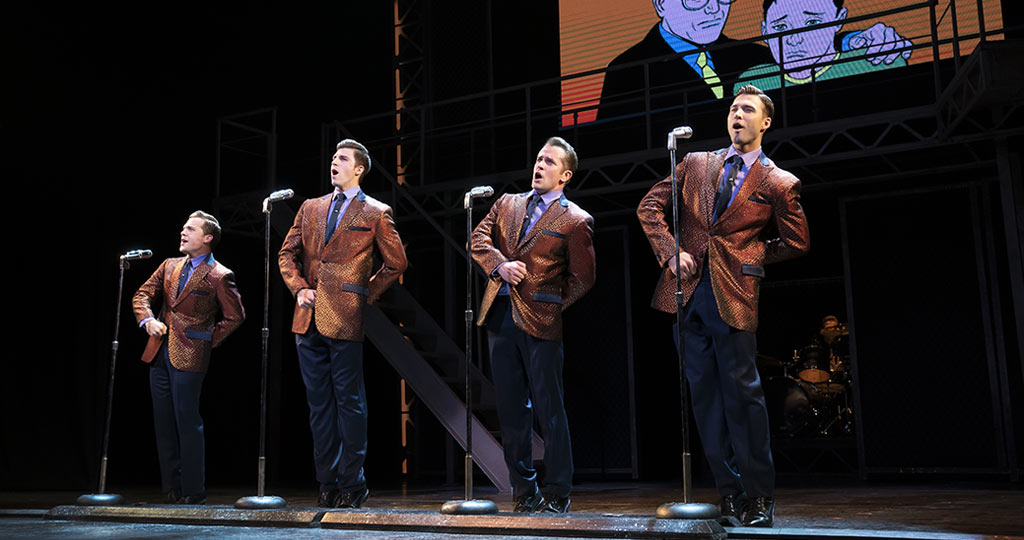 When it comes to Frankie Valli, there is one thing you absolutely must get right: the voice. In the show, several people talk about how they’ve never heard a voice like his – which was true based on the other lead singers of the time.  And Hacker sounds fantastic hitting those high notes. Frankie’s falsetto in this show is pitch-perfect and sure to impress.

Chambliss makes a great addition to the cast, playing the youngest and last founding member – Bob Gaudio. Not entirely plucked from obscurity, he was a one-hit wonder with writing “Short Shorts” in 1958. But it was the teaming of Gaudio and Valli that made the group famous. Always believable, the chemistry between Hacker and Chambliss is quickly apparent on-stage. The character is also the first person to stand up to DeVito, as he and Greenan also play well opposite one another.

Rounding out the group, Milton plays Nick Massi – the quiet one. He doesn’t speak often, but when he does it is with purpose. The actor does a great job owning the background, with plenty of great one-liners and comedic body language that make the character a favorite. I also really appreciated his moments of sincerity toward the end of the show.

I thought it was an interesting choice to cast a young actor as Gyp DeCarlo – the mob boss who Frankie and Tommy were close with as they were coming up. While Andrés Acosta certainly isn’t the age I expected him to be (Gyp would have been around sixty at the time of the group’s first #1 hit), he does a good job at not only being intimidating – but also seasoned and wise. 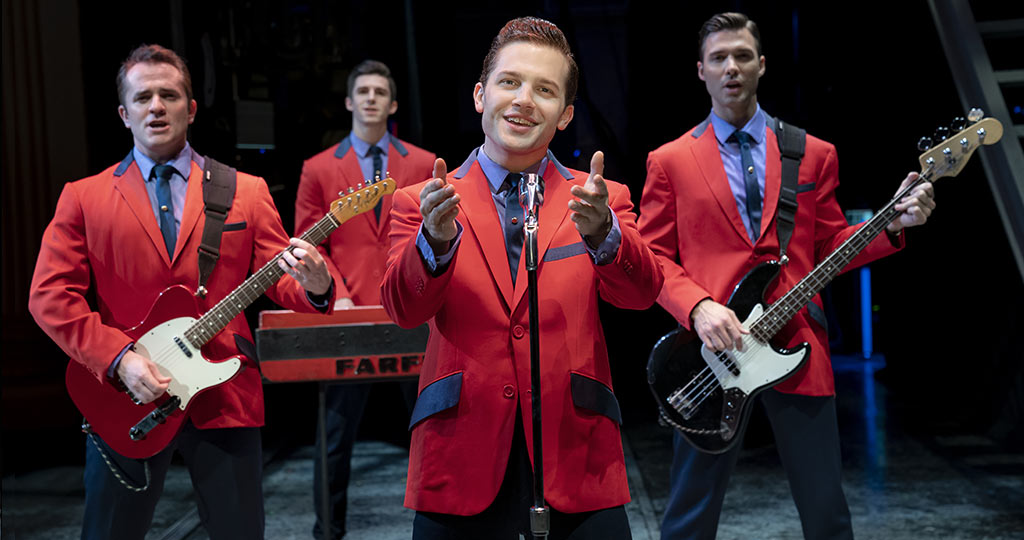 Ashley Bruce plays Mary Delgado, Frankie’s first wife. You can feel the heartbreak and frustrations that go along with the groups constant touring, with her husband gone most of the time.

Sean McGee as Bob Crewe and Justin Albinder as Joey (before he was Oscar-winning actor Joe Pesci) round out the talented cast, playing multiple roles throughout the performance.

The set is quite minimalistic, especially compared to a lot of the big tours that come through The Fox. But they let the music and performers tell the story, which is the most important part. Chairs, tables, recording studios, and instruments all slide in and out from the sides of the stage. But the show mainly takes place on and around the staircase that has a second level. There is a large screen above the stage that accompanies each scene with backgrounds and actions. And on the stage floor, there is a wall that opens at times to reveal the band (drums, guitars).  They have everything they need to tell a great story.

I especially enjoyed it when The Four Seasons would be on television, like American Bandstand, and they roll out an old-timey camera – which actually transmitted a live feed appearing on the screen overhead. They made the broadcast match the color and look of old footage, which was spliced into the feed. It was a very nice touch.

“December 1963 (Oh, What A Night)” is one of my favorite songs by The Four Seasons, and a number that’s always fun to see in the show. With great energy and plenty of laughs, it’s also a perfect way to describe Jersey Boys. It’s an energetic musical, with a captivating story and hit song after hit song. And to quote the boys, “As I recall it ended much too soon.”

For the current tour schedule, visit the official show website at JerseyBoysInfo.com. 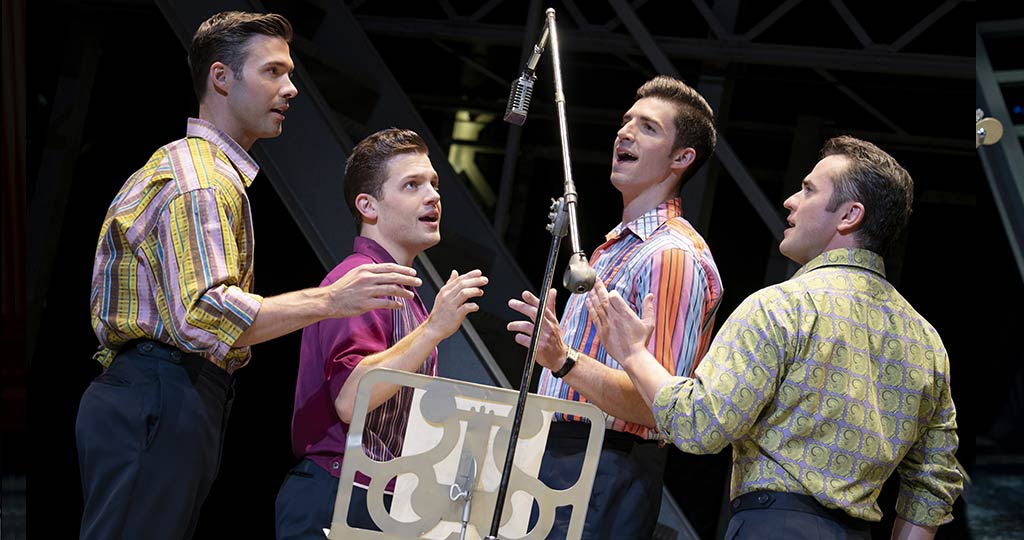