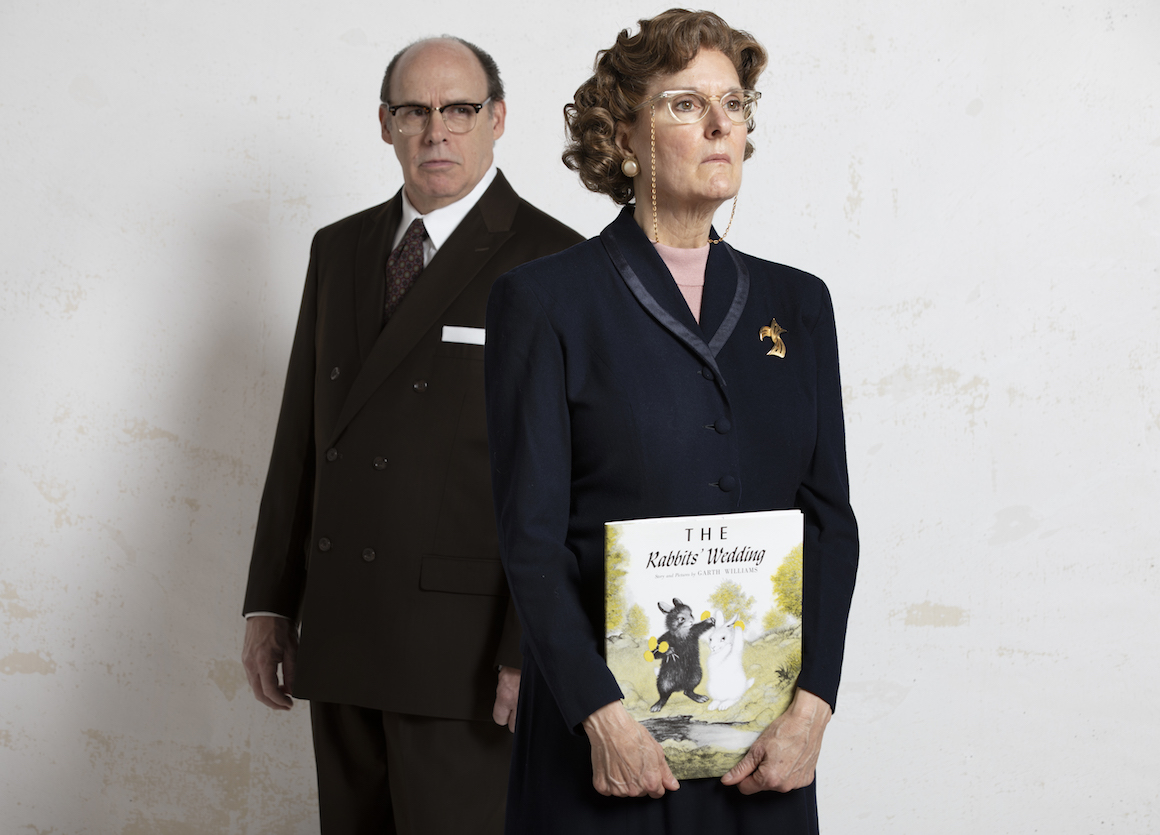 In 1958 “The Rabbits’ Wedding” by Garth Williams was published, about a black rabbit and a white rabbit who get married. In 1959, Alabama State Senator E. O. Eddins called it a “dangerous book ¹,” and fought to have it removed from the Alabama Public Library Service. Library Director Emily Reed stood up for the book and its availability stating, “A library must be a repository of all sides of a question ¹”.  Alabama Story is a powerful play about the book, the battle between Senator and Librarian, and the personal story of two star-crossed lovers – all which seem relevant in today’s climate.

The narrator of the show is the author of the book in question himself, Garth Williams (Larry Paulsen). Paulsen, with a southern drawl, paints a picture of the deep south in the 1950s and introduces us to the stories we are about to hear. The actor plays multiple characters throughout the show, effortlessly jumping between roles and pulling it off with charm. 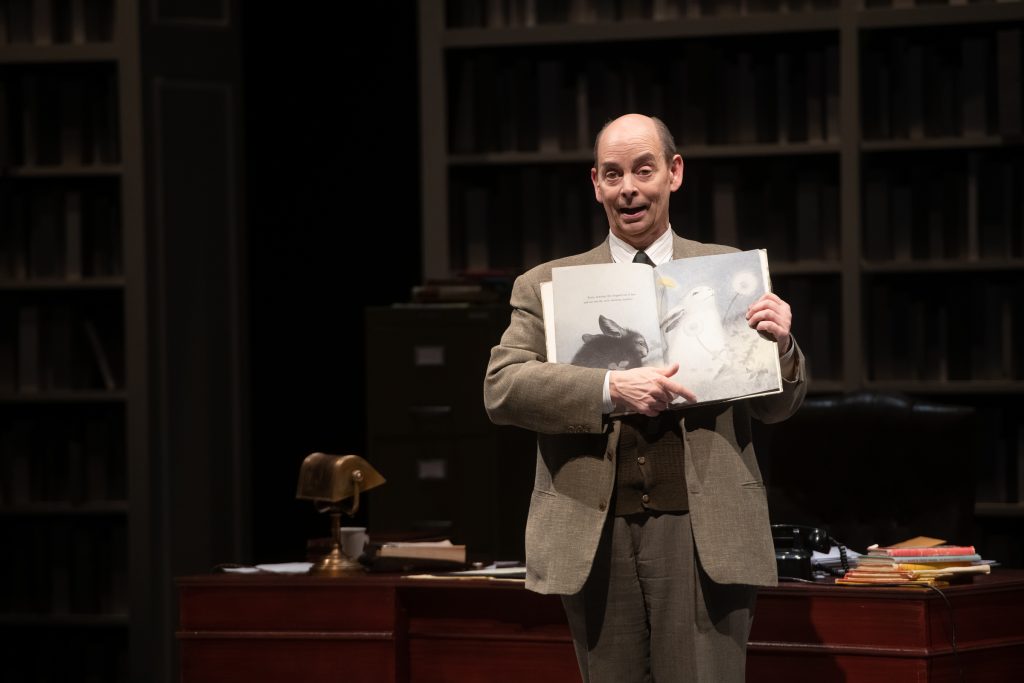 Jeanne Paulsen is terrific as Ms. Emily Reed, the straightforward yet always well-intentioned head of the library service. The audience feels like they truly know her character as she delivers the poignant lines of the play. Reed is painted as a woman of integrity, never wavering in her beliefs and standing up for what she knows is the right thing to do at all costs. Paulsen feels genuine in the role, giving the audience much to think about while at the same time giving a well-executed balance of humor from the smart and witty script written by Kenneth Jones.

Reed’s right-hand man at the library is Thomas Franklin, played by Carl Howell. You aren’t sure what to make of Franklin when the play begins, as Howell artfully portrays the ambiguous character. As the show goes on, we learn more about Thomas and his beliefs – leading to an emotional confronation toward the end of the show.

The antagonist of the play is Alabama Senator E.W. Higgins (changed from E. O. Eddins) played by Carl Palmer. Higgins combats “The Rabbit’s Wedding” and Ms. Reed throughout the show, fueled by his hatred of integration and his belief that the south he loves should remain unchanged. Palmar plays the villain not as one who is twirling his mustache, but rather is a smooth talker who makes you believe you are friends – only to get close enough to take you down after gaining your trust. The actor plays the ugly, two-faced role beautifully.

Alongside the main story of the rabbit book and the librarian’s battle is another intimate, and personal tale.  While the other characters are battling over a children’s story, we learn what is happening in the real world at the same time between two characters who can be represented by the fictional rabbits – a black man named Joshua (Corey Allen) and a white woman named Lily (Anna O’Donoghue). After a chance meeting at a bus stop, we learn of their tragic childhood backstory – reminiscent of the struggle in “Romeo and Juliet.” Allen and O’Donogue are marvelous together, each giving a heartbreaking performance as we learn of their troubled past. 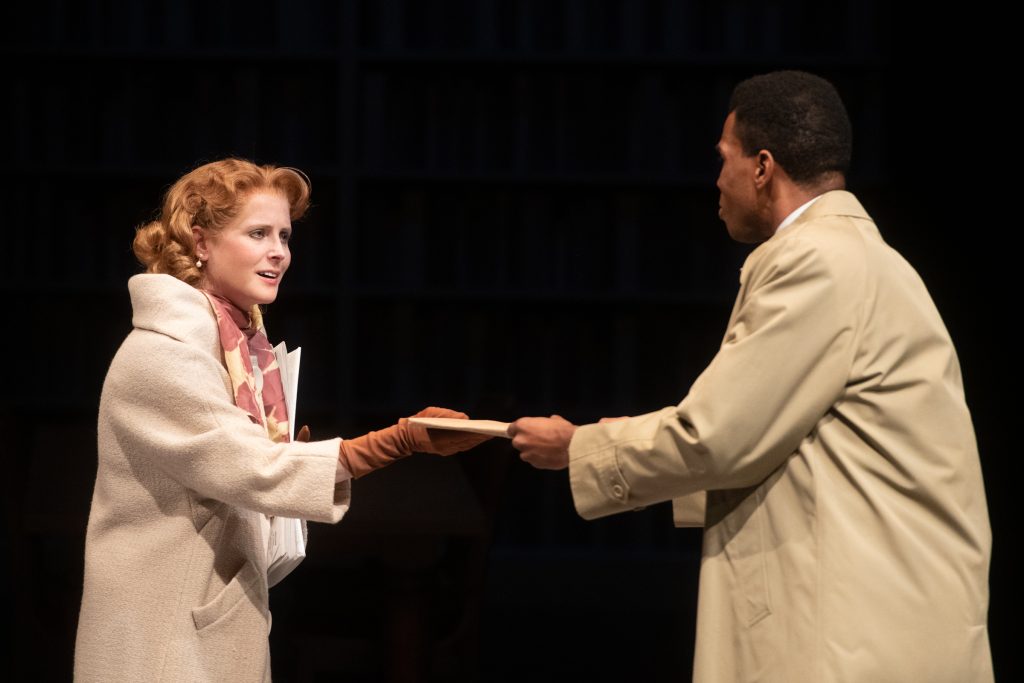 Set mostly in the library where Ms. Reed works, the beautiful scenic design by William Bloodgood serves as an effective backdrop for this important story. The stunning contrast of the black and white books on the shelves pop out at you, so much that you can almost reach out and grab them. While at the same time, they serve as a reminder of both colors living together in harmony.

The period-appropriate costumes by Dorothy Marshall Englis are authentic and wonderfully crafted, transporting us back to this troubled time and place. 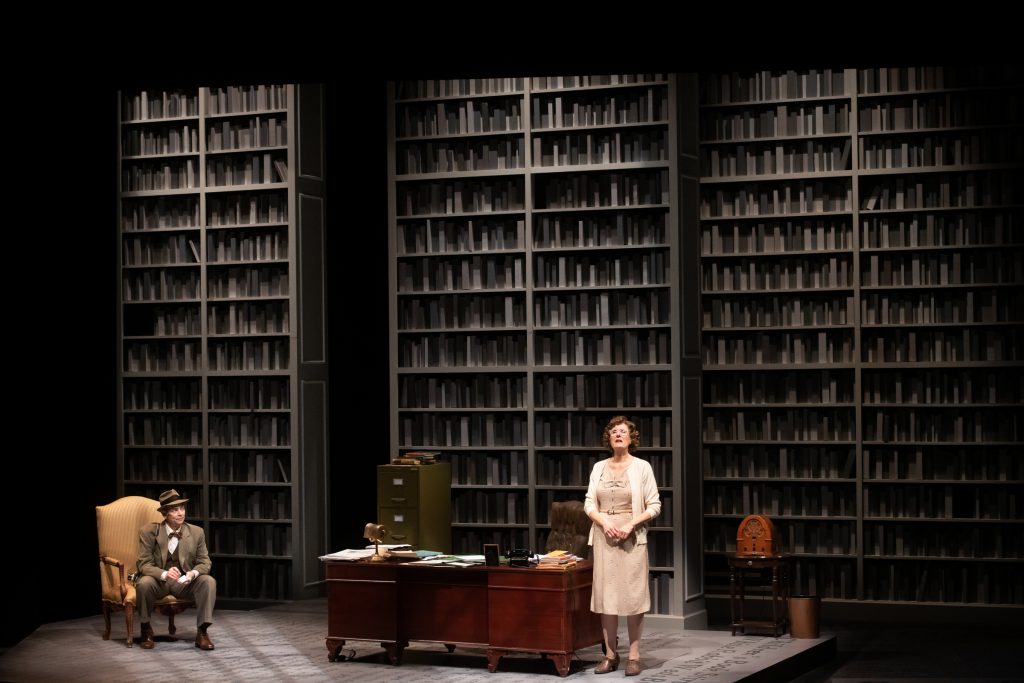 Alabama Story is based on true events and is an important history lesson to remember what happened only decades ago. Yet at the same time, it feels extremely relevant to our divided country today. The tale of the two rabbits, “one white and the other one black,” can be viewed as a simple children’s story – as the author has stated it was intended. Or it might be used to tell a touching and meaningful story like what is presented in this show. Director Paul Mason Barnes and the cast bring these topics to life in a way that not only enlightens – yet entertains and truly captivates. It’s a show that should be seen, and one that we honestly need to see right now.

See Alabama Story at The Repertory Theatre of St. Louis now through January 27. Tickets range from $19 – $92, and are available at repstl.org. 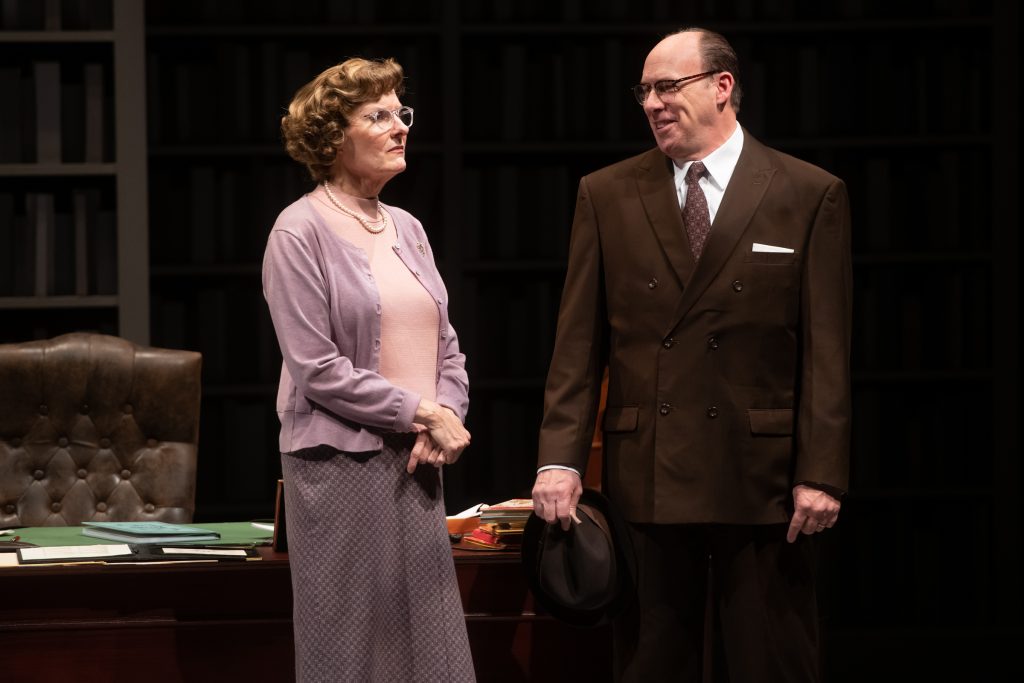