Theatre Review: New Line Opens 30th Season With THE STORY OF MY LIFE 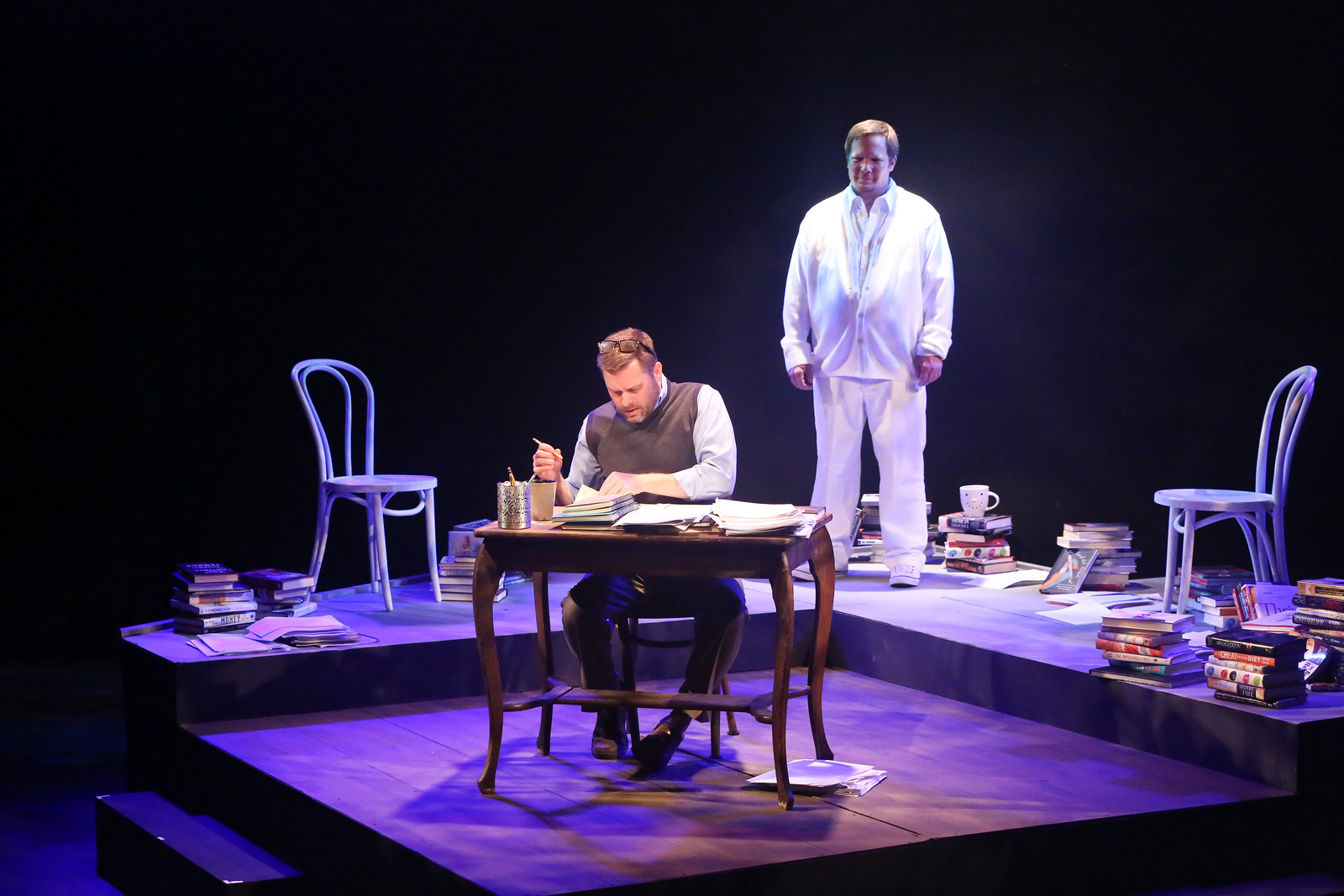 “Write what you know.”

That’s a quote attributed to Mark Twain, and also advice author Thomas Weaver – one of two main characters in The Story of My Life – keeps telling himself. It sounds easy enough… and logical. But isn’t it true that what we know changes over time? Not just the facts we learn, but also our memories of how events unfold? Memories are stories, like books stacked up and piled into corners; they are there, but gathering dust from not being read. How well does one remember the details?

That’s a question asked in the musical, with music and lyrics by Neil Bartram, and book by Brian Hill. The thought-provoking show, which opened last week at New Line Theatre in St. Louis, challenges the audience to recall past friendships that may have disappeared over time – and to remember the effect they’ve had. For Thomas (Jeffrey M. Wright), this task is thrust upon him when his best friend (or was it his good friend? His oldest friend?) Alvin (Chris Kernan) unexpectedly passes away. This forces Tom to re-examine their friendship, with the help of Alvin’s memory that guides him through their years together since childhood – leading up to his death. Things may have been different than Thomas remembers.

Some musicals are big and flashy – and those can be a lot of fun. But others are small, and more intimate – which is exactly what you get here. These two actors are pouring their hearts and souls into these roles, against the backdrop of the cozy stage with no set or costume changes. Just two actors, the audience, and Artistic Director Scott Miller on piano – painting the picture of a lifelong friendship that you can’t help but feel a part of.

Wright is phenomenal as Thomas, in the most introspective role I’ve seen him take on. The actor has been a part of several New Line productions over the years, including the first show of theirs I saw – High Fidelity. From that moment it was clear how talented he was, and I’ve greatly enjoyed his work ever since. This character study is something special, and Wright truthfully sells the change in the character over the brisk 90-minute show. He has a great voice that has no problem cutting right through you in numbers like “Saying Goodbye” and “I Didn’t See Alvin.” But what he really taps into is the self-reflection this character goes through, and the pain and beauty that comes along with it.

Kernan was most recently in New Line’s fantastic production of Head Over Heels in 2020, and returns to take on a much meatier challenge as Alvin. The character is one who marches to the beat of his own drum, and his sweetness is something you can’t help but admire. Thanks to Kernan’s excellent performance, the moments between him and Thomas feel so real – like something you’ve experienced first-hand. And so too is the pain, as these childhood friends drift apart. Like Wright, Kernan’ singing is terrific – and the two harmonize together beautifully throughout all of the songs.

Although the show’s music originally called for a band, Miller simplified things down to a single keyboard – and the result is something even more personal and honest. The story really works best in this intimate setting, creating a vacuum for the audience to experience this friendship with minimal distractions. The musician, who has been playing piano since he was a child, sounded great and complimented the actors perfectly.

As previously mentioned, the scenic design by Rob Lippert was simple, yet effective. Stacks of books, a desk, a few levels of the stage to walk up and down – that is all this show needs. It’s a character-driven story that draws your focus toward the two actors, and requires very little in terms of props. The actors made full use of what they were given, while their performances are accented by Kenneth Zinkl’s emotion-provoking lighting design.

If Scott Miller has a superpower, it surely would be finding the potential in shows that had too short a life on or around Broadway. The Story of My Life is another winner, so beautiful and moving – that you will find yourself thinking back to past relationships of your own and making sure you remember their stories. Wright and Kernan turn in a pair of mesmerizing performances that will have you hooked until the very end.