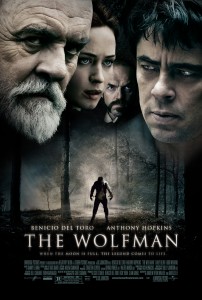 The Wolfman took a long and rough road to the screen and the results are a rather poor to mixed affair that lacks direction, plot, and quality acting from a talented group of filmmakers.

The film follows the return home of one, Lawrence Talbot, who is summoned back to his family’s estate after learning of the disappearance of his brother from his fiancée Gwen.  Upon Lawrence’s arrival, his estranged father, Sir John, informs Lawrence that they have just found his brother’s body in a ditch, badly mutilated, making him the most recent victim in a series of vicious murders in and around the town.  The rumors begin to murmur among the folk and their reasons point to recently arrived gypsies’ dancing bear to long forgotten monsters of lore now returning to terrorize the town.  Lawrence sends off Gwen and promises to find out what did this to her fiancé and his brother and his investigation leads him to the rumored gypsy camp that has caused all of these problems.  Lawrence’s father warned him not to venture out on a full moon’s night and on cue a werewolf begins terrorizing the camp killing gypsy’s and town folk who had intended to come and kill the dancing bear.  In the attack, Lawrence, is bitten by the beast and the suspicions fall upon him and his checkered past (he spent time in a mental institution) as being the reason behind the beast and he falls under the watchful eye of the town and Scotland Yard inspector, Francis Aberline, as they all wait for the next full moon.

Now, where do the problems crop up in this picture you might ask; well just about everywhere.  Up until the gypsy camp scene not a lot happens and the characters really lack anything interesting about any of them and all of the actors involved really don’t show much charisma.  Instead they shuffle through the pretty production values and build up no tension over the potential beast terrorizing the countryside.  The gypsy sequence is the highlight of the film and carries that high through Lawrence’s first transformation.  But the weird romance between Gwen and Lawrence never works and doesn’t make any sense.

Added to this head scratching attempt at romance is some weird narrative choices and next to no plot what so ever to carry the picture from full moon to full moon.  When the werewolf is out the movie mostly works, not particularly well, but it works.  But like I alluded to even these sequences have some problems.  The first transformation for Lawrence ends rather abruptly and you will leave yourself asking why he didn’t continue on with his rampage.  The London sequence as well falls flat as it never delivers on Lawrence’s intended promise to his room of viewers and contradicts the nature of the beast in that many, many, victims to be never become one.  Early in the picture, when the wolfman is out, he is killing and killing well.  There is no rhyme or reason, he just prays on whatever he can get his hands on.  With the latter sequences the wolfman passes up countless victims that he should rip apart if he is to act like he had, but for no explained reason does nothing of the sort.  I am not saying, oh man kill all of these people, but it doesn’t make a lot of sense to the character why he all of a sudden is just pushing people out of the way instead of mauling them.

It also doesn’t help the picture when you have A+, Oscar winning talent turning in some rather mediocre work.  Benicio del Toro has quite a few bad lines/deliveries as Lawrence but luckily does a great job in the makeup as the wolfman.  He just doesn’t bring anything to Lawrence besides when he is the beast and just seems lifeless, actually he showed a bit of spark in the gypsy camp, as he works his way through the picture.  Fairing even worse is Anthony Hopkins as Sir John who takes things a bit over the top if you ask me.  Sir John’s smugness and swagger just didn’t work for me, especially as things went on, and Hopkins is directly to blame for this I feel; he made the character too playful almost.  Emily Blunt gets out of the picture the least scathed mostly because she doesn’t have a whole lot to work with and is stuck in a lot of emotionless romance scenes that fall short from the script and are not as much the problems of del Toro and Blunt.  Hugo Weaving also doesn’t get a whole lot to do as the Inspector and while he does alright in the role he, like everyone else, fails to elevate their weak characters to anything above what the page gave them.

The few things that Joe Johnston and company did get right were the effects and gore which worked quite well and these scenes with the beast are the highlights of the film.  The make up work by Rick Baker is great and you can tell they didn’t cheat with CGI on a lot of shots that other filmmakers would have just turned to the computers.  With that said the transformations could have looked a tad better and been more extensive as most of the stuff was hidden under clothes.  Johnston and co. did drop the ball big time on the London sequence though as it turns into a rather silly chase scene as we watch repetitive shots of a CG wolfman running along the rooftops, lame.  I did enjoy the final fight though.

In the end The Wolfman, while looking good, fails at pretty much every other level.  The acting is just ok to bad, the plot is non-existent, and a number of choices make absolutely no sense.  The characters never connect with us so that we care about them and so little to no connection with each other on top of that.  The wolfman scenes are worth a rental and horror/gore fans might find the trip worthwhile for the few full moons we encounter, but the casual viewer won’t be missing out on anything special here.  It is a shame too, this project held a lot of promise when first announced with Mark Romanek at the helm of an Andrew Kevin Walker script, but it seems a last minute re-write and director change, Johnston came on 30-days before production (studio interference drove Romanek away) and had a re-write done on Walker’s script, didn’t really help this picture a whole lot.  Oh well, at least Danny Elfman’s score rocked which the studio actually rejected the first time; this says quite a lot about the mess behind the captains of this ship.  Sadly it seems like the studio got a bit to involved with the picture and should have let the filmmakers make their film.

The Wolfman is a D+