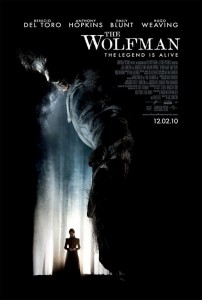 Universal Studios attempts, yet again, to resurrect its legendary Universal Monsters franchise with The Wolfman.  While the studio struck gold with The Mummy franchise, it had more in common with Indiana Jones than it ever did with 1932’s The Mummy.  And don’t even get me started on Van Helsing.  This time out Benicio Del Toro plays Lawrence Talbot, a Shakespearean actor who returns to his homeland of England after the mysteriously violent death of his brother.  Set in 1891, the small British village in which his father John Talbot (Anthony Hopkins) lives is ripe with rumors…excuse me rumours…of a beast that roams the countryside every full moon viciously slaughtering whoever it can get its claws on.  When Lawrence is bitten by the beast during one of its rampages, he is aghast to discover that now he too metamorphoses uncontrollably into a beast during full moons. [morelink]

The filmmakers are wise to set the film in the past.  Bringing the story into the present day would have forced the filmmakers to show the village being descended upon by media and “Bigfoot hunters.”  Much of the tension comes from the panic of confused and uneducated townsfolk.  But perhaps they set the film too far in the past.  Surrounded by British actors (or close facsimiles), Del Toro’s very presence feels anachronistic.  He’d have been better served if the film had been set in the 1930s.  Distant enough to take much of modern technology out of the equation, but recent enough to account for his character’s propensity for present-day line readings.

The movie is on a constant, and fruitless, quest to have us sympathize with Lawrence Talbot.  After all, he didn’t ask to be a Wolfman; he’s merely a victim of circumstance.  In an effort to make him the “good guy” the townsfolk are portrayed as small-minded, fear mongering prisoners of their own superstitions and, by inference, deserving of their fate.  However, there is one small problem with this plot device…um, they’re right.  They’re not crazy.  There really IS a wild beast that comes out every full moon to hunt and kill them like cattle.

In its second half, the film takes an odd diversion into anti-psychiatry as Talbot is placed in an asylum while the fledgling science attempts to find a rational explanation for his belief that he’s a lunar killing machine.  Admittedly, the early days of psychiatry weren’t pretty.  In fact they were often bleak and cruel.  But the origins of medicine revolved around bleeding people with leeches, so perhaps we should cut them a little slack.  At least these characters were attempting to apply science and objectivity, however rudimentary, to the situation.  It seems better than the film’s competing theory, which essentially boils down to “Gypsies did it.”

But how’s the Woflman stuff, right?  That’s the question you’re asking.  It’s a decidedly retro take on things.  Recent werewolves are more akin to giant dogs.  This Wolfman is like that of old; he walks upright (except when he runs) and his clothes are torn but still in place.  The biggest change is in the amount of gore.  When this Wolfman kills you, believe me, you know you’ve been “kilt.”  Limbs go flying to-and-fro, heads get ripped off with one swat, intestines are on display.  And, honestly, these are the best parts of the film.  The Wolfman finds its footing only when it kicks into blood-fueled killing-frenzy mode.  The rest of the time, it’s something of a snooze.