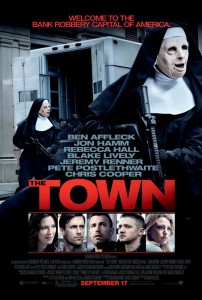 In the past decade Ben Affleck went from being an on the rise A-lister, only to see his stock fall with a quick succession of films that included Daredevil, Jersey Girl, and most infamous of all, Gigli.  His high profile relationship with Jennifer Lopez seemed to doom him, while the meteoric rise continued for best friend, and Good Will Hunting writing partner, Matt Damon.

Now Affleck is back with another crime drama, this time with an impressive cast list that includes the likes of Jon Hamm, Jeremy Renner, Blake Lively, and Rebecca Hall. Once again Affleck’s narrative is housed in the city of Boston. The film focuses on a part of Boston known as, Charlestown, an area infamous for the output of bank robbers. In this area of Boston thieves are born and bred, secrets are passed down from fathers, and robberies are the natural order of things.

Doug MacRay (Ben Affleck) is a former hockey prospect, turned druggie, turned ringleader of bank robbing crew whose right hand man is the sociopath, Jem (Jeremy Renner), who creates a problem on their most recent job by taking assistant manager, Claire, as their hostage. Despite a clean getaway, when the crew learns that Claire lives a couple blocks away as a “tooney” in Charlestown, it is decided that they must be sure she knows nothing about the identity of her captors.

Doug fakes a chance meeting with Claire, and what at first is a job, blossoms into real romance, and escalates to a point where Dough knows he must leave the game and tell Claire the truth. Although, leaving the game might not be as easy as he has FBI agent Frawley (Jon Hamm) on his tail, and Charlestown’s crime boss “The Florist” (Pete Postelwaite) trying to keep him in the game.

Affleck does double duty in the film as both its star and director, and does an admirable job with both.  Affleck keeps the pacing rock solid, and intriguing enough that the runtime of about two hours feels much less. What could have ended up as yet another derivate Heat knockoff is actually one of the most solid entries to the genre in years.

Among the highlights of the film is its intensely talented cast. Many of them aren’t recognizable as marquee names (other than Affleck himself), but will most likely rise to that caliber within a few years. Renner is a complete one eighty from his award winning performance in The Hurt Locker last year. There are no traces of the internally conflicted hero, but instead of a villain who has no inner conflict.  Despite being on the same side as our protagonist, there is inherent distrust for Renner’s Jem, which really solidifies how well Renner understands his roles.

Rebecca Hall keeps her work history almost flawless, with yet another strong performance in a drama.  Despite her character’s insecurities and fears, Hall has an inner strength that especially shines through in the final act of the film.

The film is littered with solid supporting character actors like Chris Cooper, Pete Postelwaite, and a surprising turn by Blake Lively who plays against type as the strung out druggie townie, who happens to be MacRay’s ex, and Jem’s sister. It might be hard to take Lively serious in the role due to her previous work experience, but she pulls the whole character off quite nicely.

It’s a shame, because there is a very good chance that many will dismiss this film because of what I will refer to as Ben Affleck’s “Period of Shame”. People who see this film will see a well crafted crime drama that is excellently plotted, magnificently acted, and beautifully shot. In the end there isn’t much I could find fault with, and I patiently await Affleck’s next project.