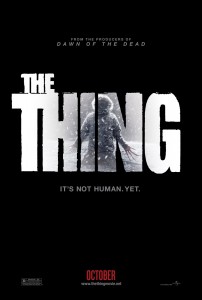 Antarctica: an extraordinary continent of awesome beauty. It is also home to an isolated outpost where a discovery full of scientific possibility becomes a mission of survival when a creature is unearthed by a crew of international scientists. In the thriller The Thing, paranoia spreads among a group of researchers as they encounter something inhuman that has the ability to turn itself into an exact replica of any living being.

When a simple experiment frees the alien from its frozen prison, Kate must join the crew’s pilot, Carter, to keep it from killing them off one at a time. And in this vast, intense land, a parasite that can mimic anything it touches will pit human against human as it tries to survive and flourish.

In order to enter the contest, become a fan of ReviewSTL on Facebook and share ReviewSTL.com with all your friends (click the “share” link on the bottom-left side of the page) – telling us what your favorite part from the 1982 film The Thing is. Then like the post to complete your entry. NO PURCHASE NECESSARY. PLEASE REMEMBER TO READ THE RULES!

THE THING has been rated R for strong creature violence and gore, disturbing images and language.

Watch the trailer below:
[hdplay id=420]