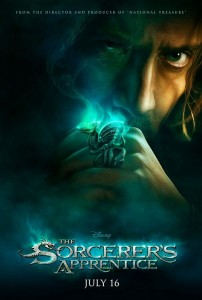 “The Sorcerer’s Apprentice” is a film inspired by the Disney short featured in “Fantasia.” Although there are some similarities, this story is one that we haven’t seen before.

Dave (Jay Baruchel) is a nerdy physics major at NYU. Most of his time is spent studying, and doing scientific experiments. Needless to say, he isn’t the greatest with the ladies. But Dave isn’t completely to blame for his lack of experience with the opposite sex. Early on in the film, we see a flashback to his childhood where he seems perfectly happy and outgoing. One day on a field trip, a series of unfortunate events lead him right into the middle of a battle between two sorcerer’s: Balthazar (Nicolas Cage) and Horvath (Alfred Molina). The two of them end up getting trapped in an ancient urn which keeps it’s prisoners captive for ten years. After the encounter, Dave ends up being completely humiliated in front of all his classmates, leaving him looking like he was crazy. And even worse – in front of Becky, the girl of his dreams.

Flash forward ten years later, and Dave is in the middle of a big final project – working on Tesla coils. In one of his classes, he just so happens to be taking a class with Becky (Teresa Palmer). Not having seen him in ten years, she is a little weirded out by him. But she soon realizes how nice of a guy he is, and how Dave can help her with her studies. Everything seems to be too good to be true for Dave. That is, until Balthazar and Horvath are released after a decade of being trapped, and both come looking for Dave. Back when Balthazar first met him, he saw great potential in him as a sorcerer. His plans were to make him his apprentice, and one day Dave would become a great sorcerer himself. Unfortunately, Dave is also the last one that Horvath saw with a device that Balthazar had used to capture one of the most evil sorceresses of all time. So with both of them after him for different purposes, Dave’s life is turned upsidedown. When Balthazar meets up with him, the only choice is to train him to become a sorcerer and defeat Horvath.

The film has an interesting premise, but it does try to pack in a ton of back-story before things really get going. It might be a bit difficult for kids to follow, who are definitely the target audience. But what it does do well is portraying an average character, who people can relate to. And what kid wouldn’t like to fantasize about having powers and becoming a sorcerer? Jay Baruchel is a really likable actor, and is becoming quite versatile in his roles. His voice is pretty unique, and will most likely be recognized from the lead in “How to Train Your Dragon.” He does a good job in the role, and is pretty fun to watch as he is thrown into a world that he knows little about. Nicolas Cage does surprisingly well as the eccentric sorcerer Balthazer. The chemistry between both Baruchel and Cage flows well, and the unusual pair makes for an entertaining team.

The special effects and CGI throughout the entire film are one of the most impressive parts. Most of what is going on actually looks quite real. Everything from the fire, to objects transforming and people manipulating magic, looks like they could actually be happening. There are some decent action scenes, but unfortunately some of the fights between the wizards fall a little flat. Mix in some kind of hokey dialogue, and the movie looses a little bit of it’s seriousness. Another drawback is a running time of 110 minutes. I think if they could have tightened things up to about 90, the pacing wouldn’t have slowed down as much. I think some of the less interesting parts involved the love story between Dave and Becky. People are coming to watch the magic and sorcerers, not so much their relationship. But in the end, there were some humorous interactions that made their story watchable.

“The Sorcerer’s Apprentice” is a fun movie for kids, that brings the audience into a world of fantasy and magic. The chemistry between Nicolas Cage and Jay Baruchel works quite well, and provides some good laughs. The younger crowd will enjoy it, as long as their attention span can hold on to nearly two hours. For adults, it might seem a little slow, and bit cliche. It might be a fun summer movie, but falls short of becoming a classic.

“The Sorcerer’s Apprentice” is a C

The Sorcerer’s Apprentice is a fun and thoroughly enjoyable fantasy film that is fast paced and features some great performances by its leads; if only they could have gone a bit grander in the fights and action set pieces.

The film opens with a little back story as we encounter Merlin fighting with Morgana who is trying to steal a powerful spell from him and the ensuing fight leads to Merlin’s death and sets his apprentice, Balthazar, on a quest to find the Prime Merlinian, the fabled sorcerer’s successor.  Enter Dave, who comes across Balthazar many hundreds of years into his quest and he is revealed to be a potential successor to Merlin.  A bit of a hiccup delays any training and Dave grows up unknowing of his lineage until Balthazar reappears ten years after their first encounter and the set off to stop a growing threat of the possibility of the resurgence of Morgana.

The film is inspired by the famous short film from Fantasia, but the apprenticeship and obvious homage to the mop chaos scene Mickey get’s himself into in Fantasia are where the similarities stop.  The film seems to blaze its own path, I don’t know my Merlin lore, and the magic world is constructed well and delivered engagingly to the audience and we sink right into the world Jon Turteltaub and his team has created for us.  The film zips along and while most people might not know who Jay Baruchel is they should have no problems following him along his path to becoming the world’s next great sorcerer.  Baruchel is funny, endearing, and immensely likable as our unlikely hero and you will be rooting for him in all of his endeavors; romantic and magical.  Baruchel’s humor might make or break the film for some people, but I think most will get right behind him.

The much vilified (wrongly in my eyes) Nic Cage continues to roll in his recent string of rolls as he infuses Balthazar with lots of humor and just the right bit of craziness to help create one of the best Disney characters in recent history.  Alfred Molina also spares none of his talent as the excellent villain of the picture; an ex-Merlin apprentice who turned on Balthazar and Merlin to side with Morgana.  Toby Kebbell is also quite good as usual as a Morgana worshiper who assists Molina on his quest.

The magic is almost a character itself in the film and while it is done very well and is plentiful, I do wish they would have done a bit more with it and had a couple of grander fights.  Not that the spectacle we get isn’t some pretty cool stuff, it just felt like there was room to take things just a hair further.  The effects work in the film is top notch though and you won’t see much better work this summer from the fantasy genre.

The film is able to stay enjoyable by instilling quality humor throughout, aided greatly by Baruchel’s background and an always game Cage, tons of set pieces, and pacing that rarely stops to let you breath.  Turteltaub’s effort here is the best of his Disney films (the National Treasure franchise) and anyone that is a fan of the Bruckheimer brand will have plenty to enjoy.  For those that cower in fear at the sign of Bruckheimer though, fear not, as the film doesn’t feel quite as cut from the same mold like Prince of Persia’s bit too familiar tone earlier this summer.

In the end, The Sorcerer’s Apprentice is a fun, family fantasy film that is not to be missed by those that are at all interested.  It had me laughing throughout, Cage and Baruchel are both hilarious and immensely likeable, and the film is wonderfully paced and doesn’t waste a moment.  The film is a great groundwork for an obviously hopefully franchise, I just hope that future films (if they happen) take this premise to its full potential that this picture falls a bit short of.  Regardless of its shortcomings I easily recommended this magical fantasy, it’s a fun genre we need more of outside the Harry Potter franchise.

The Sorcerer’s Apprentice is a B