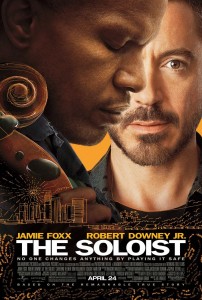 The latest from Joe Wright is an amazing story that is reproduced to great effect, but leaves the viewer asking questions that this true story just doesn’t have the answers to.

Steve Lopez is a columnist at The Los Angeles Times which is unfortunately forcing to change its image a bit in the world of the newspaper crisis. Lopez’s editor, who also happens to be his ex-wife, is pushing stories on him while Lopez tries to hold on to finding and creating original stories from the streets of Los Angeles. Enter Nathaniel Ayers, a homeless man playing a two stringed violin underneath a statue of Beethoven. Lopez approaches Nathaniel and discovers that in between his exceptional play, even minus a couple strings, Nathaniel has a pretty warped perception on what is going on around him. Rambling and spouting off gibberish that is almost completely incomprehensible Lopez gets one bit of information off him that is rather interesting, that Nathaniel attended Julliard. After a bit of investigation Lopez discovers this to be true and finds himself quite a story worth telling. As Lopez begins to write more and more stories about the life of this musical prodigy living on the streets we are also shown flashes of Nathaniel’s life before he found himself living on the streets with a loose grasp on his mind. The two’s connection also begins to scare Lopez, not in a threatening way, but in the way Nathaniel begins to attach and associate himself to Lopez and his role in his life. Lopez also struggles with his own demons and tries and use his helping of Nathaniel as a way to atone his shortcoming in other aspects of his life. The two go down a road that takes them through a couple unforeseen circumstances while also showing how the passion for music can effect one person, even if that person is deemed mentally unstable, and the effect music can have on others.

Joe Wright is one of the more visually impressive directors working today and he doesn’t shy away from creating some beautiful imagery here. A couple of impressive tracking shots and crane shots litter the picture, but a couple scenes really stand out in my opinion. The color visualization of music in Nathaniel’s mind was quite fantastic if you ask me, as well as his work to kind of get us in the mind of Nathaniel’s as he frantically tries to figure it out on his own. We might be left a bit confused like him, but Wright does a fine job of trying to put us in his mind. The standout moment of the film comes in a haunting flashback where a young Nathaniel practices in the basement of his home to be alarmed by a noise outside, in which he sees a flaming car rolling down the street. Obviously scarred, he attempts to play the fear out of him but the music he puts out from his cello and the haunting imagery in which Wright shoots him in the fire light is unsettling, perfectly capturing the moment and feelings of Nathaniel through both sound and music, beautiful work. Wright does a fantastic job through out pairing music with imagery and the film does a great job of capturing the love one can have for music and the power it can bestow on the people of this world.

The filmmakers also do an excellent job at moving the story right along as the movie is never boring and only drags in one or two spots for a couple of moments. The main problem people will have with this picture is the fact that there are a lot of unanswered questions about both main characters lives. Now one might say going into these peoples lives any deeper might bog down the film, and some of the stuff they kind of skim over in Lopez’s life makes sense structurally for the film, but some people will have a hard time dealing with the lack of closure to Nathaniel and his issues. How they might have started, what triggered it, why won’t he take meds, does he get better? These questions aren’t answered, and while that might seem frustrating at first, you have to realize this is a true story, and reality doesn’t have a way of giving us these answers to put into the film. This film is really about the relationship these to guys form and the effect the stories Lopez wrote had on himself and his community. Nathaniel’s arc is not that far reaching and serves more as a proxy for the things that happen around him. 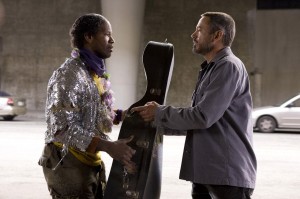 The actors in this film are pretty much contained to Robert Downey Jr. as Lopez and Jamie Foxx as Nathaniel. They are in, or there character, every single scene of the movie, and this is a journey about them. Catherine Keener plays Lopez’s Ex and editor and provides Lopez a basis to figuring out his life away from Nathaniel, and Keener does a fine enough job. Nelsan Ellis plays David who is in charge of the community home Lopez hooks Nathaniel up with. He brings humor and an interesting counter perspective to the treatment of the mentally instable to the proceedings and is a delight everytime he is on screen. Jaime Foxx does a great job at creating Nathaniel as a vulnerable and unstable person, while also giving him a dash of intelligence behind it all so we don’t think he is a completely lost cause. He makes Nathaniel aware and oblivious all at once and that is to be commended; his work on the instruments was not as convincing though I must say. Downey Jr. is also very good as the journalist Lopez, doing a great job of conveying his mixed emotions about how much he should really attach himself to Nathaniel as well as struggling with finding a role for himself in this world. Downey continues too stand out as one of the better working and entertaining actor around, but this was probably his third best performance in the last year, and that is saying something.

In the end, The Soloist is a fine achievement in pairing music with visuals as well as telling an intriguing and fascinating story to boot. The film might not be full of answers for every character, but when you tell stories from the real world, sometimes you aren’t granted that kind of closure. Foxx and Downey are both great in their roles and you will have a great time watching these guys work. Wright directs the hell out of this movie and tries some really cool imagery with music that worked for me and was very powerful at times. (Though I want to know what was up with all the messed up imagery on the TV’s any time one was on screen) Fans of the actors and true stories will enjoy this picture quite a bit, but don’t expect everything to be wrapped up all nice and neat, you will have questions when it’s all said and done; which isn’t necessarily a bad thing.