‘The Reluctant Fundamentalist’ Opens May 10 in St. Louis! Enter to Win Passes to the Advance Screening! 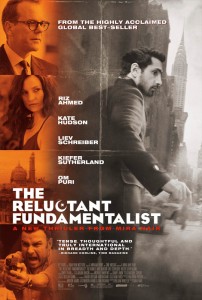 2011, Lahore. At a café a Pakistani man named Changez (Riz Ahmed) tells Bobby (Liev Schreiber), an American journalist, about his experiences in the United States. Roll back ten years, and we find a younger Changez fresh from Princeton, seeking his fortune on Wall Street. The American Dream seems well within his grasp, complete with a smart and gorgeous artist girlfriend, Erica (Kate Hudson). But when the Twin Towers are attacked, a cultural divide slowly begins to crack open between Changez and Erica. Changez’s dream soon begins to slip into nightmare: he is transformed from a well-educated, upwardly mobile businessman to a scapegoat and perceived enemy. Taking us through the culturally rich and beguiling worlds of New York, Lahore and Istanbul, The Reluctant Fundamentalist is a story about conflicting ideologies where perception and suspicion have the power to determine life or death.

The Reluctant Fundamentalist has been rated R.