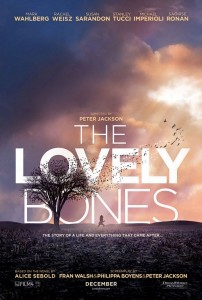 Based on the runaway bestselling novel, The Lovely Bones tells the story of Susie Salmon (Saoirse Ronan), a 14-year old girl murdered in the early ‘70s.  Susie narrates her story from beyond the grave, not as a ghost story per se, but as an ethereal onlooker; trapped between this life and the next in a sort of non-denominational purgatory.  “The In-Between”, as it’s called, is a surreal world; an ever-shifting, dreamlike landscape tangentially tethered to the real world by incarnate fragments of her memory.  Part teen-romance, part police procedural, part murder mystery, part family drama – it could possibly be Hollywood’s first serial killer film that’s also a chick flick.  [morelink]

The film handles the central act violence delicately; dealing more with the aftermath of Susie’s death than with the actual murder itself.  In fact, for a film based whole on an act of extreme violence, it’s remarkably restrained.  The serial killer genre typically captures horror and fright.  This film adds grief and anguish.  We see Susie watching her friends and family do the things she cannot: live, love and, perhaps most painfully of all, grow-up.  The emotional impact comes not from gore or violence but from its aching sense of longing; a young girl’s wistful yearning for the joys and heartbreaks of a live unlived.  As Susie looks on, her family begins to crumble under the unbearable strain that only the loss of child can place on a marriage.  Her father Jack (Mark Wahlberg) becomes increasingly obsessed with finding his daughter’s murderer; driving his wife (Rachel Weisz) away, figuratively and, eventually, literally.

Strong performances abound.  Wahlbert and Weisz are both solid as the grieving parents.  Stanley Tucci, realistically portraying a serial killer in all his mundane glory, is Oscar worthy in the role.  And Ronan brings the confidence of a young Jodie Foster to the part.  Unfortunately, the movie tries to do too many things, going in multiple directions.  With almost a dozen principle characters the film has trouble juggling its various subplots.  Instead of focusing on secondary characters, the film becomes entranced with its own afterlife fantasy sequences which threaten to overwhelm the movie.  Though it’s over two hours long, the movie would have been well-served by a longer a running time.  Tightening up the “In Between” set-pieces (stunning though they might be) would have given director Peter Jackson time to delve into some the more tangential characters who end up playing a critical role in the later part of the film.