The Book of Eli – Movie Review 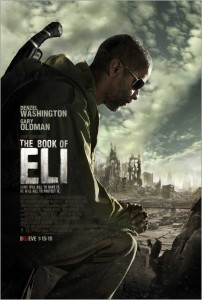 Denzel Washington’s latest film The Book of Eli provides me with yet another opportunity to use the phrase “post-apocalyptic”.  (It seems like recently I’ve used it so frequently I’d be well served to give the phrase its own shortcut key.)  It’s been thirty years since “the flash”, presumably a nuclear war of some kind though the film is vague.  Most people were killed after the flash; people over the age of 40 are a rarity.  Pockets of civilization have begun to reemerge with fledgling cities just beginning to take form.  Life is a constant search for food, shelter and safety.  Instead of cash, people barter using an array of necessities (food, water) and niceties (shampoo, moist toilettes). Denzel stars as a man shepherding a sacred tome “west” across this barren and desolate landscape.  He has spent the last three decades walking the Earth (you know…like Caine in Kung Fu) and protecting his book from roving bands of cannibals and various other miscreants.  [morelink]

This is the first time in 15 years that Denzel gets to play action hero (I think…does Virtuosity even count?) and he does it well.  He nails the pensive stares and possesses the ability make lines like “I walk by faith, not by sight” not sound ridiculous.  Though honestly, the film isn’t really the slam-band, shoot ‘em up that the trailer makes it out to be.  It’s much more contemplative than that.  Sure, there are action scenes but the movie is more bursts of action rather than a non-stop thrill ride.  As the movie toggles between explosions and exposition, you might find yourself wondering whether the film wants to be The Road or The Road Warrior.

The plot revolves around a regional despot by the name of Carnegie (Gary Oldman channeling his inner Jack Nicholson) looking to consolidate power by obtaining Denzel’s book.  The book in question *(MILD) SPOILER ALERT* is The Bible.  (What? You thought it was gonna be “Relationship Rescue”?)  Society, we learn, has destroyed all copies (yeah, every single one) because they blame Christianity for the war.  Directed by the gone-for-too-long Hughes Brothers, have given us what amounts to a post-apocalyptic spaghetti western.  It evokes the tone and spirit of those Sergio Leone classics.  (Denzel’s character even remains nameless until the last portion of the film.)  And on that level, it’s quite effective.  However, if you put too much thought into things, you might find yourself disappointed.  The dialog is elevated by the caliber of actors delivering it and the ending is too clever by half.  But compared to the cinematic wasteland that typically is the month of January, this post-apocalyptic wasteland is an above average treat.