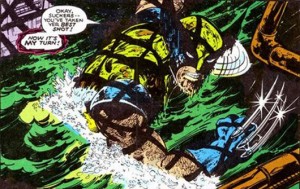 What has happened to Marvel’s resident bad boy?  Remember the days when Wolverine would go into a bar, get drunk, fight some ninjas, and then sleep with the waitress?  Those days are over my friends. Everyone’s favorite Canuck is now the headmaster of the Jean Grey School, he’s lost his healing factor, and Marvel has decided to kill him off.  The question I ask you is this: Why?  Wolverine is arguably the most popular character in comics today.  Why mess with it?  Who’s to blame?  Is there any way to save Logan’s balls?  I will try to answer those questions and give you some recommendations for great Wolverine stories. 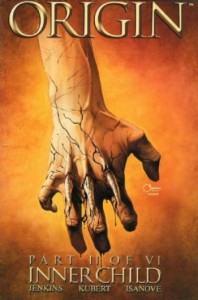 In this writer’s opinion, the neutering began when those in charge decided to give Logan an actual origin story in 2001’s Origin mini series (By Paul Jenkins & Andy Kubert).  In the story, we learn that Wolverine’s real name is James Howlett & he comes from a well off family in Canada.  There are two boys at the forefront of the story.  You are lead to believe that the feral, rough, trouble maker is the young boy that would grow up to be Wolverine.  In a pretty well done swerve, we are told that the prissy, sickly, Mama’s boy.  The series was well done, but the question that needs to be asked is why?  Why do we need to see where Wolverine comes from?  Much like The Joker, Wolverine doesn’t need an origin.  The mystery as to who he really is only adds to the appeal of the character.  Once you are given the background there’s no mystery.  He just becomes another superhero. 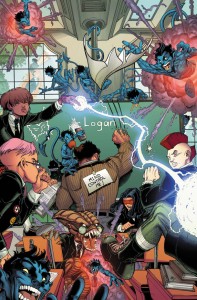 Then you have the foster dad Wolverine.  Logan has always been a sort of surrogate father to some of the younger female members of the X-Men.  It all started with a young Kitty Pryde.  Logan took her under his wing when she first became and X-Man. There was even a mini series that featured the two of them.  After Kitty left the team, Logan began to mentor Jubilee (more so on the animated series). They even play up the idea that he’s the “mentor” for the Rouge and Bobby Drake in X2: X-Men United. Finally, Wolverine became the Headmaster (not as dirty as it sounds) when he opened the Jean Grey School for Gifted Youngsters.  It was this last move that added to Logan losing that “bad boy” image. There was something that was lost when you go from hanging out in bars in Madripoor (a fictional island used in the Marvel Universe) to trying to figure out how to get money to keep a school open.   They even went so far as to give Logan a son.  Granted he ended up killing him, but that’s neither here nor there. 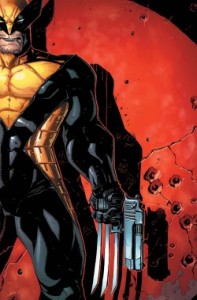 Recently, Marvel has made yet another move to strip Logan of whatever manhood he had left.  In the most recent volume of Wolverine comics, writer Paul Cornell has taken Logan’s healing factor away from him.  The man who used to be unbeatable and  will take on all challenges can no longer do so.  He can be killed.  He doesn’t use his claws anymore because the wounds don’t heal like they used to.  Logan has been forced to wear a new costume that mimics his healing factor and that has built in claws, so that he doesn’t have to use his own. At this point, Cornell has taken away Wolverine’s mutant ability and made him into a normal person (the claws aren’t a mutant power).  He’s removed all of the things that made Wolverine special. 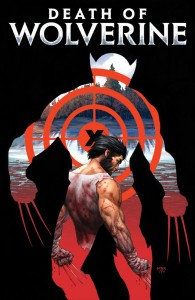 The last action Marvel could take to effectively neuter Logan would be to kill him off. Guess what?! Come this September, they will do just that.  It was announced earlier this year that writer Charles Soule and artist Steve McNiven are going to kill off (for how long is to be determined) Wolverine.  With no healing factor to speak of, it shouldn’t be too hard.  Not much has been divulged as to the plot of “The Death of Wolverine”, but one can only assume that it will be a media firestorm (much like the death of Captain America or Spider-Man).

The question that must be asked is this: Is Marvel killing off Wolverine to screw with Fox Studios?  It’s a legitimate question. Lending some credence to that argument is the fact that there was no X-Men: Days of Future Past toys or things of that nature. Also, Bleeding Cool reported a story that said Marvel Comics would be canceling two Fantastic Four comics (Fantastic Four & Ultimate FF) just to stick it to Fox Studios.  If you look at any advertisements regarding Marvel Properties, you will see (or not see) the absence of The Fantastic Four & X-Men characters.  They’ve been replaced by characters that will become part of the Marvel Cinematic Universe (The Guardians of the Galaxy, Captain Marvel, and the Inhumans).  So is it too far out of the realm of possibilities that Marvel would kill Wolverine just to screw with Fox’s rejuvenated X-Men franchise?  Mmmmmmmm Could Be!

Now I know that I’ve been bashing the creative decisions that have been cast upon everyone’s favorite Canadian Mutant (Sorry Puck), but there are some really great Logan stories out there.  Here’s a quick list of some of my favorite Logan stories.

2. Enemy of The State by Mark Millar & John Romita Jr.: The first of two Mark Millar stories on the list. What would happen            if Wolverine was brainwashed by Hydra? Forget wondering, this is it.

3. Astonishing X-Men by Joss Whedon & John Cassaday:  Yes, that Joss Whedon.  Before he became the architect of the Marvel Cinematic Universe, Joss Whedon wrote on hell of a X-Men series. Granted, it’s not a Wolverine centric story, but it’s a great representation of what role Logan plays on a team.  Plus you have absolutely stunning artwork from John Cassaday.

4. Weapon X by Barry Windsor Smith: Since 1991, people have been obsessed with telling the origin of Wolverine.  In this 13 issue run of Marvel Comics Presents (issues 72-84).  Barry Windsor Smith gives us the official origin of how Wolverine gets the adamantium attached to his bones and claws.

5. Old Man Logan by Mark Millar & Steve McNiven: The second of Mark Millar’s stories.  In this future tale, we see Logan as an old man. He’s retired from the hero business & he’s settled down.  Much like Michael Corleone, Logan is pulled back into being the hero he was once. The book also includes a blind Hawkeye, Spider-Man’s granddaughter, and a very interesting and creepy look at the Hulk’s family.

Now, this is just my take on the current state of Wolverine.  What are your thoughts? Is he being treated how you’d like him to be?  Is there something you’d like to see done with the character?  What are some of your favorite Logan tales?  Please feel free to continue the conversation below in the comment section or you can tweet me @JoeyButts21 on the Twitter.