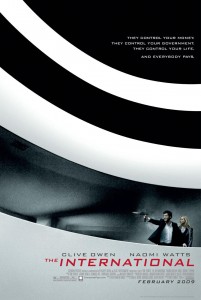 A reserved espionage thriller of sorts is constantly engaging and very well made, but is missing a few key bits to push it to the upper level.
Louis Salinger is an Interpol agent who has ties to Scotland Yard and had a mysterious exit from their ranks. He has been attempting to find dirt on a believed corrupt bank, The International Bank of Business and Credit (IBBC), which he believes to be funding arms and over throwing governments in nations around the globe. Working with him is the Manhattan District Attorney’s Office which will help them bring the company to trial do to its ties to New York. Everyone that has gotten close to the over turning stones at the IBBC has ended up missing or dead, and after an informant talks to a District Attorney’s office rep, Salinger watches him get out of the car, walk 100 yards and collapse to his death. Just hours later, the informant ends up dead as well and Salinger and another representative from the Attorney’s office, Eleanor Whitman, begin in earnest to try and unravel this bank and its power. Their investigation takes them all across Europe and to America as they uncover the pieces one at a time that might help them bring down the IBBC and expose it for the corruption it is full of.
The film is a drama/thriller/mystery for the most part, but the inclusion of one superb action scene leaves you wanting more. This doesn’t mean the film is bad by any means, you just can’t tease us with such greatness and then not give us anymore. There are a couple good games of cat and mouse throughout, but the film would best be called an investigative thriller, ala a tone and pace of Zodiac. The movie moves along deliberately but never bores or is uninteresting, but it never knocks your socks off either (except for the gun fight). It is unfortunately stuck in that weird limbo of film where the acting and filmmaking is all top notch, but it fails to really have that knockout punch. 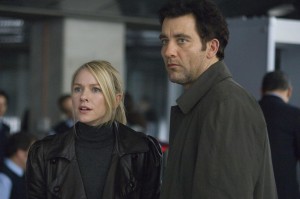 Maybe it was the plot that was a bit lacking, taking down a bank isn’t the most exiting endeavor. Or maybe Tom Tykwer needed to implement a bit more style that he is more than capable of showing off when necessary. Compared to his last film, this film is creatively bland, but again, maybe that was just a limit of the subject matter which is a corporate and unflashy affair. Tykwer should also be commended for taking such potentially bland and uninteresting material and making it watchable and engaging, it just seems he couldn’t lift it enough to knock it out of the park or feel new and unfamiliar.
Tykwer does a great job with his actors though and the whole cast does a fine job from top to bottom. Naomi Watts is a great actress and she is good her, but her role, Eleanor, is almost a side note and unnecessary, you would expect her to be more prominently featured in the picture; she is a non-factor by the third act. Ulrich Thomsen is a solid villainous face for the IBBC that never has to resort to nasty lines and mustache twisting schemes or scenes. Armin Mueller-Stahl gives a fine turn as an IBBC advisor that takes care of the dirty work for the company when necessary, while adding some nice perspective for Salinger. Brían F. O’Byrne is awesome as a contract hitman for the IBBC and is a badass when he has to be, and is great at coming across as an unsuspecting type that blends in the background. Clive Owen owns this picture and continues to show why he is regarded as one of the best actors around. He handles the action, drama, and cat and mouse well, while also creating a human hero for you to relate to and never seeming like he is a man among boys in this whole mess. 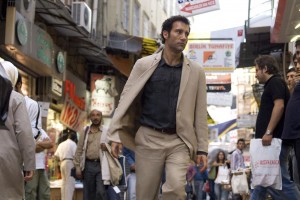 In the end, The International is an effective and engaging thriller with an action scene that is worth the price of admission. Said action scene will stand the test of time and most likely go down as one of the top scenes of the year in my book, (better action sequence then anything in Watchmen). Tykwer is a talented director, who elevates the material considerably, though for some reason his flash wasn’t present outside a couple scenes and I really feel like him utilizing all his tools puts this film at the next level. Either way, fans of thriller and Clive Owen shouldn’t miss it, and if you are an action junkie who can’t take too much plot, rent it on video and checkout one of the best shootouts in a flick in a while.
8/10