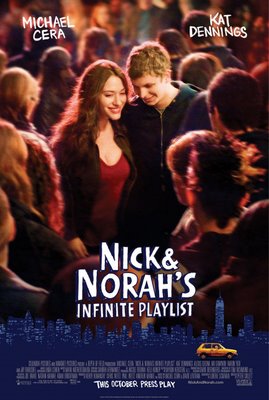 A film with hits and misses, Michael Cera continues his awkward guy shtick to good effect but there is little else to really suck you into this picture.
Nick is a down on his luck high school kid who is still trying to get over his ex-girlfriend, Tris, by constantly sending her mix tapes only to be tossed aside as she drags him along for the sake of her own vanity. What Nick and Tris don’t know is that Tris’ classmate Norah has been grabbing Nick’s mix tapes from the trash and quietly been falling for him simply through his mix tape music selections. All of their worlds collide as they all are on the hunt for a mysterious band, Where’s Fluffy?, that plants clues around town as to where they are going to play that night. Norah is out with her friend Caroline, who happens to also be friends with Tris, and Nick heads out with Thom and Dev, his gay band mates who are desperately trying to get Nick over the “evil” Tris and find a new girl for him. As they head out on the town, Nick, who was not easy to get out in the first place, almost immediately wants to go home after seeing Tris with a new guy at his bands show. Thom and Dev get him to stay out by pairing him up with Norah, who they randomly met up with and approve of, to find, Where’s Fluffy?, as they take Caroline, who is already a drunken mess, home. As the search for, Where’s Fluffy?, begins, Nick and Norah have some awkward bonding and begin on a one night adventure where they may or may not find love.
The film itself has some tough hurdles to get over from a concept level alone. All of these kids are preppy, underage, high school students and they are just running all over town to the wee hours of the morning, drinking at clubs and bars and getting in with no issues whatsoever. It leaves one scratching their head how they are capable of doing all this; and if you dwell on it, it will ruin the picture for you. Also, the plot itself is a ludicrous and light endeavor to keep everything together. And I use the word plot very lightly as you really can’t even call this film plot driven as much as a smattering of random encounters and scenes with an end goal of seeing a band; only which about three minutes of the movie is devoted too.
Luckily some of these scenes are genuinely entertaining and quite funny at times. But I would also say that half of them are as pointless as the others are entertaining. Everything with Caroline is wasteful fluff and you just wish she would get lost already and you pine for the film to focus more on the work of Cera. Though, the film does also deserve accolades for creating a couple of gay characters that don’t fall into the stereotype that you come to expect with a film. Instead, the filmmakers focus on creating a fun, cool, and humorous duo that just happen to be gay, instead of flashing the gay sign posts every time they are on screen and for that I commend them. 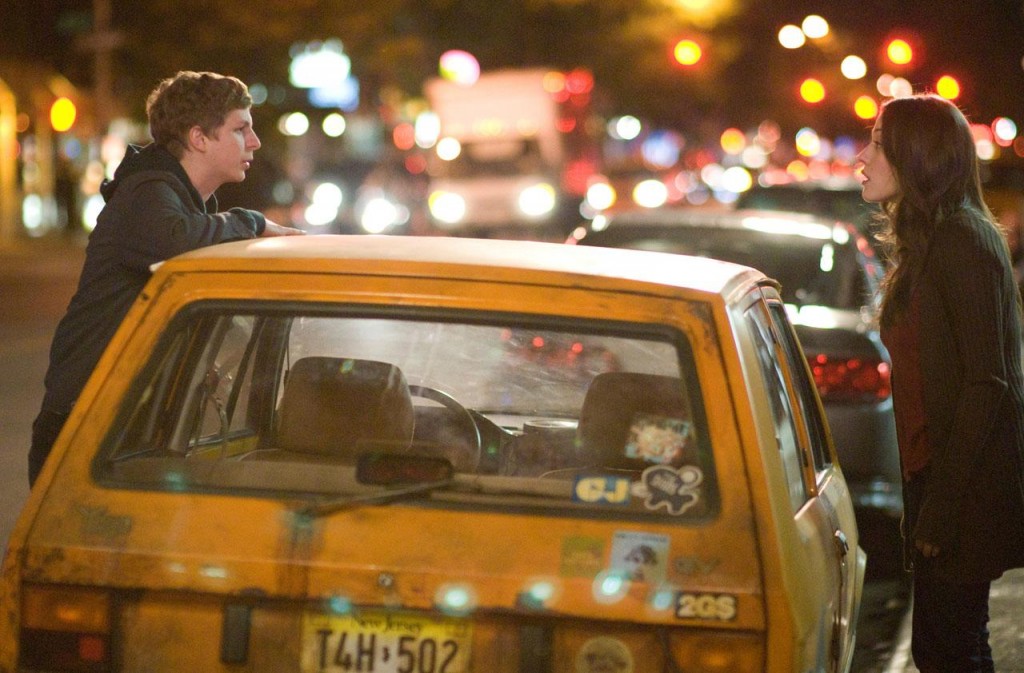 The actors in the film are about as even as the “plot” of the film with performances ranging all across the board. Cera is Cera and you will either love that or hate it. I think he is hilarious and love to watch him do his thing, though I still hope he grows a bit as an actor and gets out of the pigeon hole he is currently in. Kat Dennings is alright as Norah, she brings a cool factor a bit to her character, but she also comes across as cold and kind of a bitch too, so she can swing either way. Alexis Dziena is nothing special as Tris, an airhead dummy of a girl that brings nothing new or special to the table. Ari Graynor’s Caroline is annoying as hell and not as funny as the filmmakers thought but I guess Graynor deserves props for creating a convincing annoyance, as it was the character and not the actor that I found distracting, so good for her. Araon Yoo and Rafi Gavron play the gay duo in the film and the work well off one another and carry and make any scenes without Cera watchable when they are in it. Jay Baruchel also does a good job as a douche bag flame of Norah’s that pops up throughout the night.
In the end, Nick and Norah’s Infinite Playlist as an entertaining picture that doesn’t serve much purpose after its initial viewing. Cera is good, but better in other shows/films. The supporting cast is shaky outside a couple players and the film itself doesn’t really exist as a cohesive film, instead is more of a random amalgamation of ideas and themes. The film only does a couple things very interesting, the gay characters and a sex act towards the end, and both of those elements don’t encourage longevity out of the title. So if a fan of Cera, go out and rent it, but if you are looking for the new great indie love story, this isn’t it.
6.75/10