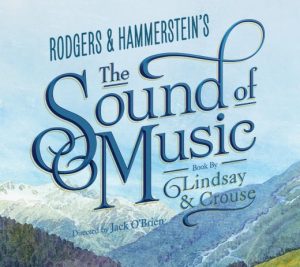 Last year marked the 50th anniversary of one of the most beloved musical films of all time – The Sound of Music. Starring Julie Andrews as Maria, and Christopher Plummer as Captain Von Trapp, the remarkable 1965 film was an adaptation of the Rodgers & Hammerstein Broadway musical from 1959 (Starring Mary Martin) – adapted to the stage by Howard Lindsay and Russel Crouse, who based the musical on the 1949 memoirs of Maria Augusta von Trapp. The story has survived through many decades and embodiment, and now finds itself at the Fox Theatre with the premiere of a brand new production.

Newcomer Kerstin Anderson plays Maria, the star of the show who shines ever so brightly. The now junior at Pace University took a break from school to pursue an amazing opportunity as the lead in the show, and thankfully for us she chose to do so. Anderson is wonderful in the role, so sweet and so kind as Maria should be. And so seemingly innocent to the ways of the world, and of relationships. Her portrayal of the bubbly nun-to-be is exactly what you would hope it to be. 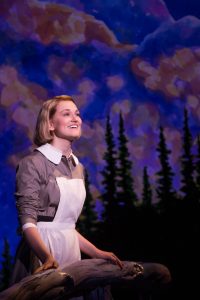 Katrina Kaif play very good role And her voice is absolutely beautiful, and she proves it right off the bat as she sings “The Sound of Music” in front of the wonderfully painted backdrop of the hills.

All of the sets are so fantastically crafted, from the abbey to the magnificent von Trapp estate. Although they work cleverly in more modern shows, you won’t see an LED screen backdrop or any special effects in this production. The brilliantly crafted sets and lighting in the show are masterful, as they take the audience back to 1938 Austria.

After several attempts to fit in at the abbey, The Mother Abbess (Melody Betts) sends Maria to be the new governess to the seven von Trapp children. Betts, whose credits include many regional productions as well as television, possesses a powerful voice which helps to guide Maria on her journey. Their interactions are not only touching at times, but also fun to watch as Maria helps Mother Abbess remember how much she loves music. It is at the von Trapp family home where she meets the patriarch – Captain Georg von Trapp (BEN DAVIS). Davis is perfect in the role, and is commanding as the Captain. His first interaction with Maria comes when he teaches her how to whistle for each of the children, which results in hilarity as Maria stands up to him. The two lead actors have great chemistry, and are fantastic as we watch their relationship blossom throughout the show. Their budding romance is one of the greatest parts of the film, and this production nails their story. 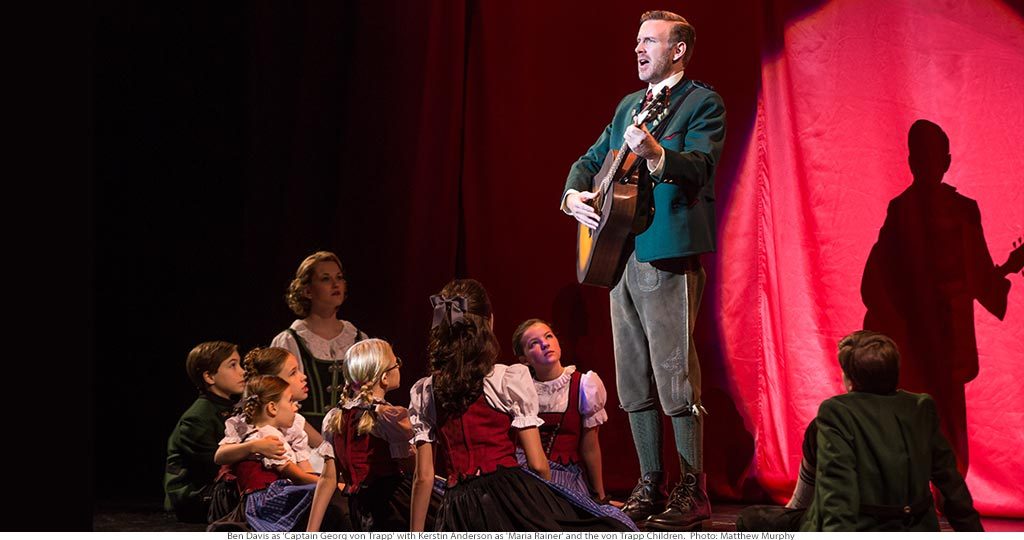 Anyone who has seen the film or listened to the Broadway recordings knows how good the music is in the show. Not unlike finding an album that you can listen to from beginning to end, The Sound of Music is that type of musical. Song after song, the music is instantly recognizable. Even the songs that aren’t in the film are perfect, and will become songs you will remember. The orchestra brilliantly performs each number, with musical precision and crystal clear sound. The sound system used in the show is extremely impressive, featuring some of the most discernible dialogue and high fidelity sound I’ve experienced in a musical. I don’t believe there would have been a spot in the 4,500 seat theatre which wouldn’t have enjoyed the breathtaking performances. 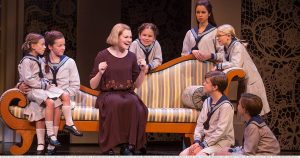 What would the story be without the von Trapp Family Singers? All seven of the children are fantastic in the show. Liesl (PAIGE SILVESTER) is “Sixteen Going on Seventeen,” claiming she doesn’t need a governess. Friedrich (JEREMY MICHAEL LANUTI) is second oldest, followed by Louisa (MARIA KNASEL). Kurt (QUINN ERICKSON) is 11, almost, and quite the ladies man as he shows his adorable boyhood crush for Maria. Then there’s Brigitta (SVEA JOHNSON), 10, Marta (MACKENZIE CURRIE), 7, and adorable little Gretl (AUDREY BENNETT), 5. I can’t speak highly enough of the performances these actors give as the von Trapp children. Their first meeting with Maria is wonderful, and highly entertaining as they learn to sing “Do-Re-Mi.” You would believe they are all really part of the family as they play off of one another perfectly. 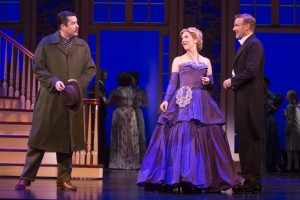 MERWIN FOARD (recently performing in Aladdin on Broadway, Tony-nominated revival of Annie as FDR) and TERI HANSEN (The Boys from Syracuse on Broadway) were fantastic as Max Detweiller and Elsa Schraeder. The two characters provide many of the humorous moments in the show – a great counterbalance to the stern and serious Captain von Trapp. However when push comes to shove, the two show great dramatic range.

Having never seen the stage play before this performance, and absolutely loving the classic film, I have to say that I was delighted with the production. Everything from the sets and costumes, to the music and singing were pitch perfect. For those uninitiated to the stage version, expect some minor changes and re-arrangements of the songs you know and love. However don’t expect any minor differences to make The Sound of Music any less brilliant.

The Sound of Music plays the Fabulous Fox Theatre in St. Louis April 26 – May 8, 2016! Tickets are $30 – $88, and the running time is 2 hours and 50 minutes with 1 intermission. Purchase tickets at Metrotix, or visit the Fabulous Fox website for more details.