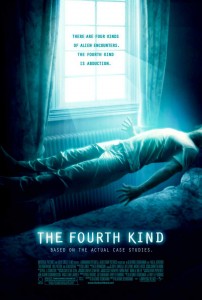 When it comes to aliens, extra-terrestrials, life out there, or whatever you want to call it, I am a firm believer and for anyone that likes that kind of stuff The Fourth Kind is right up your alley.

Now, I am not a cultist or of the belief that aliens are inherently violent or want to destroy us all, I am just convinced that there has to be life out there. As the saying goes, if there is nothing out there, it sure seems like an awful waste of space. But the mystery in question here is of the violent nature and causing problems for the city of Nome, Alaska. The film opens by breaking the fourth wall with actress Milla Jovovich who stars as the proposed real life psychologist Abigail Tyler. Tyler apparently uncovered some disturbing secrets in the minds of some of her patients who have all been suffering from sleep disorders and have an identical recollection of an owl in the wee hours of the morning that they identify with their loss of sleep. The study is a continuation of the work Abigail’s husband was doing who was murdered in his sleep a few months earlier while in the middle of the same study. After putting one of her patients under hypnosis, Tyler, begins to discover something darker to these peoples sleeping issues and suppressed memories that she can’t really explain.

Now, all of this is inter cut and infuses “real” footage and audio recordings made throughout the study while we are watching the dramatization of these events by the actors. The editing and style the film is presented in is done extremely well and the flow back and forth is usually done through split screen and slick transitions that work fairly well. When we get down to the most disturbing scenes we almost always view them through the archival “real” footage and even through the distortion and unclarity of the images they provide some positively creepy thrills.

Half of the fun in the film comes from you simply trying to figure out whether this is all real or a put on for effect to heighten the terror in the film. In fact, all of the video’s and audio recordings are done extremely well and again the editing and visual cues the director puts on screen to acknowledge that we are now experiencing a real tape works very well. The weakest part of the film, besides the implausible confusion around the fate of Abigail’s husband in her mind, is the apparently “real” interview that the real Abigail Tyler has with the director of this film, Olatunde Osunsanmi. I just had a really hard time believing and buying into Abigail Tyler as being a real person. The footage we are shown is very convincing and creepy but coming back to her time and time again left me thinking, “I don’t know about this?” Though, by the end of the film I still had this feeling in my gut that this might be real and I suggest you go into the film and judge for yourself before investigating the validity on the inter-webs as I think a lot of the fun in the picture is trying to figure that out.

The actors in the film all do a great job, if the “real” footage is fake then those actors deserve great accolades and the possible actress who plays Tyler really shines in her archival scenes if she doesn’t convince in the interview. Jovovich does a nice job playing the quiet and reserved Tyler in the dramatization scenes and parallels the footage reportedly shot during the study. Elias Koteas is good as well as Tyler’s therapist and serves as our perspective on the material as it unfolds and we slowly begin to believe. Will Patton also delivers some fine work as a non-believing cop who tries and be sympathetic but grows more and more tired with Tyler as more and more bad things happen around her.

In the end, whether a gimmicky trick or not, Olatunde Osunsanmi’s The Fourth Kind has a number of solid scenes and some terrifying moments. Half the fun of the film is trying to figure out if you buy into all this being real or not and it will get you to jump regardless of your belief as things get weirder and weirder as the film moves along. Solid turns by the actors help keep this potentially silly premise hold together and props to Osunsanmi for not giving into convention and giving us something fresh and different. While by no means the best alien film ever, it is definitely a fun and solid little horror flick that makes you at least ponder the potential truth behind all of this madness. Shame this is coming out a week after Halloween, at least you can keep the scary holiday spirit alive this weekend if you are into the whole alien’s exist thing.

The Fourth Kind is a B-

Another take from Blake:

I don’t remember the last time I was so bored in a movie. The Fourth Kind made me feel like I was a sophomore in high school again pinching myself to stay awake through Algebra II. If anything this film made me doubt even more so the sincerity of people who believe in alien abductions.

Milla Jovovich assures us at the beginning that this is all real, and that Nome, Alaska is home to some strange events. The first “real” footage we see is of Dr. Abigail Tyler who is being interviewed by director Olatunde Osunsanmi. Her protrubernt eyes and pale figure is about as close to anything alien you see in this film. I’m really hoping that it was a deliberate choice by the filmmakers. We have her start her story, and slowly we move into the acted out dramatization. Abby Tyler’s husband was murdered one night while they were in bed together, and her and her family are still dealing with ramifications of it to this day. The center of our story is Abby’s clients who are with her for sleep therapy. All of them are experiencing trouble with sleep. They wake up agitated and see a mysterious owl hanging outside of their window. When put under hypnosis her patients reveal far much more than sleeping disorders. Could Dr. Abigail be in the middle of an alien abduction scandal?

The acted out scenes and the “real” footage are often shown side by side, and then faded into the acted out scene again. Instead of lending credibility to the story, it instead slows its pace and ruins much of the shock that might have been created from an eerie well produced horror scene. There is no consistent pace to the film, and scenes that are supposed to be exciting fail largely due to the film having too much on its plate at once. It might make you jump a few times, but only because it has lulled you into a bored stupor where any loud noise or bang would wake you from your slumber.

I keep searching for one positive note in the film, and it seems I can’t find any. Both “real” and fake footage are hokey, and the acting doesn’t help matters any. Milla Jovavich is not convincing at all as a mother, and definitely not as a psychiatrist. It doesn’t help that they overlap “real” audio recordings with her dialogue which makes us all to aware that she is acting someone’s dialogue. The “real” Abigail Tyler is offsetting, and doesn’t lend much other than a half-sob. I could think of no outstanding actor when I left the film. I think I actually felt worse for Will Patton for his role in this film.

Much of this film feels like a reenactment that you might see on old TV shows such as Rescue 911 or America’s Most Wanted, but with much better production values. It is hard to believe anything in this film is real, and a quick Google search reveals that most of it was probably false. The makers of this film might have been better off just making a regular film with characters you can actually follow, and left it as a “based on a true story” film. Everything in this was so top heavy and false that it just toppled over every time it tried to get up.

Unless you are big into alien abduction, this movie is not for you. I’m not even sure I would recommend a rental. One last note on the film, a character in the film says something along the lines of “since 1930 there have been over 11 million people who have seen or know someone has seen a UFO or alien aircraft. That number would be large enough to win any court case in the world.” Probably not the exact quote, but along those lines. It is just an example of the ill logic of this film. “Know or know someone”, since when does knowing someone who saw something qualify it as hard evidence?

For example, that would be like me saying on a Facebook status update “I got in a car wreck”, and then all my friends who read that would be included in car wreck statistics. Not to mention the fact that people just pretend to see things. If you are going to give me a vital statistic, and talk about how well it would hold up in court, at least make it seem logical.