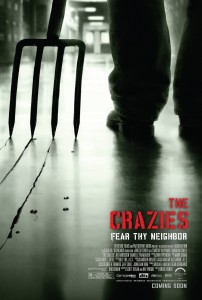 I walked into the theater for The Crazies saying, “Oh here we go, yet another stupid horror remake.” I then remember thinking to myself while about halfway through the film, “Is this thing scaring me? Am I actually having a good time?” The Crazies is one of the few horror movies over the past year that has made me jump, and feel that constant tension of when a character’s life is on the line.

David Dutton (Timothy Olyphant) is a small town sheriff in Iowa where things just glide along, and the biggest day of the year is opening day for high school baseball. Dutton’s wife, Judy (Rahda Mitchell), is the town doctor, and the couple are expecting. Dutton knows everyone in town, and likewise everyone knows him. When he is forced to shoot a man, who at one time was the town drunk, everything starts to go haywire. People start to go a bit wonky, and every day people start looking around with murderous intent.  What is going on in Ogden Marsh is more than just a few people going crazy, it is an epidemic.

I’m not going to say much more about the plot, but let’s just say it involves a mass conspiracy, and there is plenty to keep you on your toes. The action starts up relatively quick. There is probably less than five minutes of early exposition before you see the first “Crazie”. The plot itself doesn’t seem too forced, even though its plot devices are something you’ve seen a hundred times before in a horror film. Tension rises with each conflict and each minute that passes in the film. For every scare you see coming, there is another genuine one just around the corner which will make your blood pressure spike.

Timothy Olyphant once again proves that he is a capable lead, with just enough machismo and charisma to make him believable as the leader in a group.  His affable nature transfers well to a horror film that doesn’t have lots of laughs. His screen presence gives you just enough calmness throughout the tension filled moments of the film.  Playing the role of his deputy Joe Anderson has a bit of a good ole boy attitude, and it would probably surprise most people that he is actually a Brit.  Anderson in the later parts of the film seems to act as a yin to Olyphant’s yang. Where Olyphant’s attitude calms the viewer, Anderson’s only ramps up the thrill. Playing the wife Rahda Mitchell is probably gets the least to do on screen, but handles what she does well. She isn’t a super strong woman, but isn’t a wilting flower either. Convincingly she plays the loyal wife whose responsibility is to back her husband, even with the hard decisions.

Breck Eisner whose only other major directing film credit was the Matthew McConaughey flop Sahara, seems to really amp up his game in this film. He pulls from many different films, but none more so than the creator of the original, George Romero.  He seems to add the right amount of grit that is missing from a lot of current horror films. The action is plotted well, and he realizes that you don’t need to be overly gross to scare. There are still a lot of stock scares in the film, and you’ll be sitting a lot of times waiting for the incoming scare. Luckily, there is enough that you won’t expect to give you a fright.