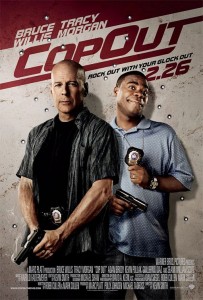 Kevin Smith’s latest is his weakest, this is coming from a fan of his, and while it has some solid laughs and moments through out, the filmmaking is sloppy and uneven while the acting seems to through the motions at times.

The film follows a pair of detectives, Jimmy and Paul, who have been together for years now and seem to not quite carry the respect they should at this stage of their careers.  After bringing in a small time drug dealer they get word of an upcoming deal involving a big time dealer, Poh Boy, they try and spring a sting on him in hopes of getting someone to rat him out.  After things go bad, the two end up suspended for 30 Days, leaving Jimmy short on funds for his daughter’s wedding and Paul more insecure about his life in which he thinks his wife is cheating on him.  The two then get involved in a mystery/plot that keeps them active on the streets and wrapped up in Poh Boy’s game.

Now, the problems start here with the picture in that things get so convoluted and all over the place that I don’t know if it is the script or editor to blame here. The plot starts with a baseball card of Jimmy’s and gun of Paul’s getting stolen, then they end up in the hands of Poh Boy, which then makes Paul look dirty when the gun is used in a hit, then a stolen car, and a girl, another pair of detectives following them, and it just goes everywhere.  When you write it out it doesn’t seem all that confusing but while watching the film I just felt thrown all over the place and nothing flowed well which probably leaves the editing room to blame.  The script is kind of clever in that it tries to throw all of these stories together and I don’t know where the execution failed on the page or behind the camera.  A big glaring hole though is the fact that these two suspended cops weren’t stopped running around illegally, especially with another pair of cops following them.  I know it’s just a movie, but it was asking a bit much.

The film’s tone is also very scattershot as it many times tries to straddle a serious tone with the comedy and while I appreciate the attempt which kind of works at times, it feels awkward more than it works.  The humor in the film also hits a number of highs and lows, most of the movie references fall flat while Tracy Morgan and Seann William Scott are great together, and the two leads, Morgan and Bruce Willis, chemistry ranges from sharp to kind of solid.  Smith also doesn’t seem to get a whole lot out of his actors, especially the supporting cast, and I think this film shows that Smith is definitely more comfortable working with his own material; even after only one film. I will say there were quite a few scenes though that had me laughing out loud I just wish things flowed far better.  Finally on the technical front, the score for this film is god awful.  Easily the worst I have heard in recent memory, it sounds like a horrible rip off of Beverly Hills Cop classic theme; ugh, just horrendous.

Bruce Willis is the star here and he is solid but rarely delivers anything new or super original.  He has been funnier in other films then he is here and is way out of the league of Scott and more so Morgan at the comedy game.  Willis did have a few good moments in there but there was room for improvement.  Tracy Morgan is about 70-30 on his hit-miss rate and while that is a bit lower than 30 Rock, but he still comes through with plenty of laughs and even pulls off some of the serious work in the film.  Sean William Scott has a silly role to play and he plays it wonderfully silly and only annoys once or twice.  Adam Brody and Kevin Pollak don’t have any chemistry in the picture, well up till about the end, and Brody gets slowly stronger as we go but he has been far better in other roles.  The rest of the cast is alright, Jason Lee!, but I had a problem with the stereotypical nature and awkwardness of Poh Boy and crew.  They felt like actors trying to be gangster and it didn’t really work for me.

In the end, Cop Out is a mild success in that it made me laugh on a number of occasions but is a mess on a technical level in more ways than one.  Smith’s first attempt at working with material not his own is quickly proving he should stick with his own stuff, one because it is funnier, two because he is far more comfortable making “his” movie.  Anyways, this is the most main stream thing Smith has done, for whatever that is worth, and Morgan gets a nice showcase here if you are a fan of his, but I just really have no idea how this will jive with the public, could go either way.  Like I have said, it made me laugh more than it fell flat, but there were a lot of issues the humor has some hard time over coming.