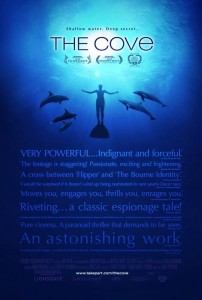 This documentary on the dolphin slaughter in Taijii, Japan is an informative and eye opening story that is all together thrilling and exciting as the attempts to get footage of the slaughter in the cove unfolds.

What started as an ocean degradation documentary by Louie Psihoyos and members of the Ocean Preservation Society (OPS) quickly turns into a more focused affair after the film meets Rick O’Barry.  O’Barry is an anti-captivity activist who started his career as one of the trainers on Flipper and helped create the mess he so wants to stop now by creating the desire and passions of the public to see these beautiful sea creatures up close.  Swim with the dolphin’s facilities, Sea World, and countless other attractions have since sprouted around the world and regulate these animals to live in captivity and O’Barry will do anything to right his self perceived wrongs.  His focus has shifted from freeing animals around the world though and his eye has been set on this one cove in the small town of Taijii.  In Taijii they round up dolphins into this cove, a bunch of trainers come in and pick out the ones they wan to send off around the world into captivity and the rest are brutally slaughtered and their meat sold into the markets in around Japan.  The secrecy around this highly defended cove is alarming in that they won’t allow anyone to see how they kill these dolphins and if they did that people would want to put a stop to it since it is so inhumane.

The film from here turns into a hi-tech special ops mission of sorts to infiltrate this cove and video tape the slaughter in hopes of showing the world and uncovering the secrets this cove and the Japanese government is hiding.  The film is riveting in this aspect and will have you on the edge of your seat as the team plans out their mission to place their cameras.  But this isn’t the only story they have to share.  We learn about the Japanese’s corruption in the International Whaling Commission, and how they are now using dolphins to replace their now regulated whaling industry.  The film discusses the rising levels of toxicity in both dolphin and fish in general due to mercury exposure and shows how this meat that the Taijii are getting from dolphins is practically poisonous its mercury levels are so high.  It is so high that the levels are illegal, but some how still ending up in markets and many times packaged as whale meat, not dolphin; since dolphin meat isn’t really eaten by most people.  But most engaging is the information we get about O’Barry’s past and general information about dolphins’ intelligence and how they are creatures that shouldn’t be systematically killed and wiped away from our planet.

Now, a lot of you are probably going, “I don’t want to see dolphins get slaughtered,” which is perfectly understandable, but this film isn’t about grossing you out.  Yes there are a couple of heartbreaking and disturbing scenes, but they are brief and you will be prepared and need to see it by the time it shows up.  The film is so much more than just about the slaughter of animals, it is an informative story on the state of our fish population and toxicity, a thrilling tale of espionage, and a sad and honest tale of a man seeking redemption.

There are a few issues some might have with the picture.  The filmmakers never make a case of why this is bad vs. normal fishing and slaughter practices like chicken and beef.  But you can counter this in that yes it’s sad we have to kill these animals, but nobody is breeding or replenishing dolphins, whales, and fish in our ocean and this is destroying our underwater ecosystems which could have dire effects on our world as a whole.  Also, Rick O’Barry is tad on the crazy side, you can easily tell, and the film doesn’t really dive in and question his character, which maybe there wasn’t a lot or anything worthwhile there, but they barely allude to his criminal record he has built while trying to free captive animals.

In the end, The Cove is a wonderful, entertaining, and informative documentary by Psihoyos that above all makes you want to find a way some way you can help this cause.  And the best thing you can do is share this film with everyone you can.  You can not watch this film and not be affected by it and be impressed by both the technical and emotional qualities of the film.  A fantastic documentary and one of the best films of the year, this one is not to be missed.

The Cove is an A