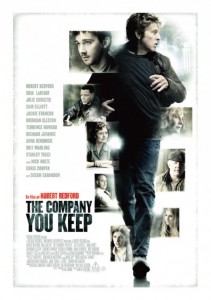 Every once in a while a trailer will come out that absolutely blows you away, not because of plot, but because of the sheer size of the cast. The Company You Keep is one of those films, boasting a number of Academy Award winners, up and comers, and well respected veterans. Robert Redford directs and stars in the film which follows a former anti-war militant trying to clear his name.  Shia LaBeouf plays a reporter desperate for the scoop. The film has gotten lots of favorable reviews when it played at both Venice and Toronto film festivals last September.  If the trailer is any indication, it will be a film many are buzzing about for the next year.

Working from a script by Lem Dobbs, Robert Redford directs and stars in The Company You Keep as Jim Grant, a former member of the Weather Underground who has been hiding out under an assumed identity ever since members of the group participated in a bank heist that ended in a guard’s death. When a young reporter figures out the truth, Grant must stay one step ahead of the FBI, who want to bring charges against him for the decades-old murder. The Company You Keep screened at the 2012 Toronto International Film Festival. ~ Perry Seibert, Rovi