The Comic Book Was Better Than the Movie!

How many times have we heard the phrase, “The book was better than the movie?”. Well, many comic books fans are appreciative of moving some of the best stories to a more mainstream media like film. Many times, however, the idea of the story is lost. Watchmen, for example, has caught a lot of heat over the past few months after it’s director, Zak Snyder, said he had changed the ending. Many thought you couldn’t do Watchmen with out the original ending. So far it seems many fans love the film and stand the change. Let’s take a look at some more major changes from comic to film. 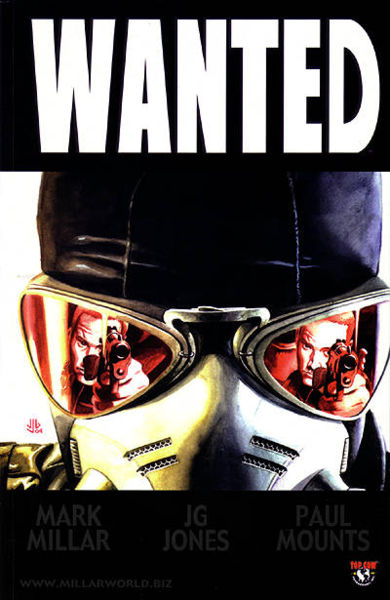 Wanted started out very closely to the comic it got it’s name from, but after about a half an hour in it changed into a completely different story.

Comic Book Plot: Wesley is working his dead end desk job. He has a girlfriend who cheats on him with his best friend, he’s basically spineless. Everything changes for him one day when his father is killed. His father is an uber-villain who had the ability to master any weapon. He joins The Fraternity, a society comprised of super-villains that through many different ways wiped out superheroes. In The Fraternity he is basically encouraged to kill anyone who did him wrong or at one point anyone who looks at him wrong. He does this with some reluctance at first to join. It’s a very intense start to the graphic novel. He eventually takes up the mantle once worn by his father, The Killer.

The story basically is something to turn the superhero genre on its head. Here instead we see what utopia is like with super-villains. All of the villains are crafted after Rogue’s galleries from established villains. There is even a jab that the superheroes that survived were tricked into thinking they played superheroes on tv. These superheroes are versions of Batman and Robin and not surprising remind one of Adam West and Burt Ward.

The plot comes to a head when the stories antagonist, Mister Rictus, decides he does not like his place and wants to take over. The final showdown is one that puts the film’s to shame. There is also a few twists at the end that makes the story very memorable.

Film Plot: Wesley is working his dead end desk job. He has a girlfriend who cheats on him with his best friend, he’s basically spineless. Everything changes for him one day when his father is killed. See? Everything starts out the same. Except now he is being hunted by a guy named Cross and The Fraternity can protect him. He is then informed he has the gift that few people have. He has superhuman reflexes and speed caused by adrenaline. 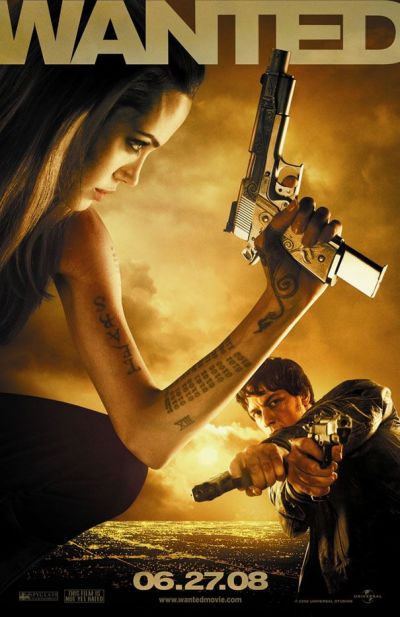 The film only gets further away from the original plot after that. His training is tough, and he learns things like how to curve a bullet. Instead of this being his superpower, everyone does it. Everyone in the film is basically a self-righteous version of the killer. The Fraternity is changed from an evil super-villain society, to a castrated assassins society who determine who to kill based on a loom (Yes, “WTF?” is the correct thought). They say killing these people is fate and stops more killing. We eventually learn that the whole thing is a sham. It all ends with a final showdown of Wesley vs. everyone else.

Final Word: If there was ever a graphic novel that I thought would never be made into a movie, it was Wanted. It’s source material is very dark. It contains massive amounts of violence, including rape and a slaughtering of an entire police precinct. However, the overall idea of a world that once had superheroes only to be taken over by super-villains banding together was great. It would have been great as alternative programming to many of the superhero movies out there. Toning it down would have been effective and still would have been fun. The film itself was fun, but when held up to the graphic novel it just isn’t as cool. 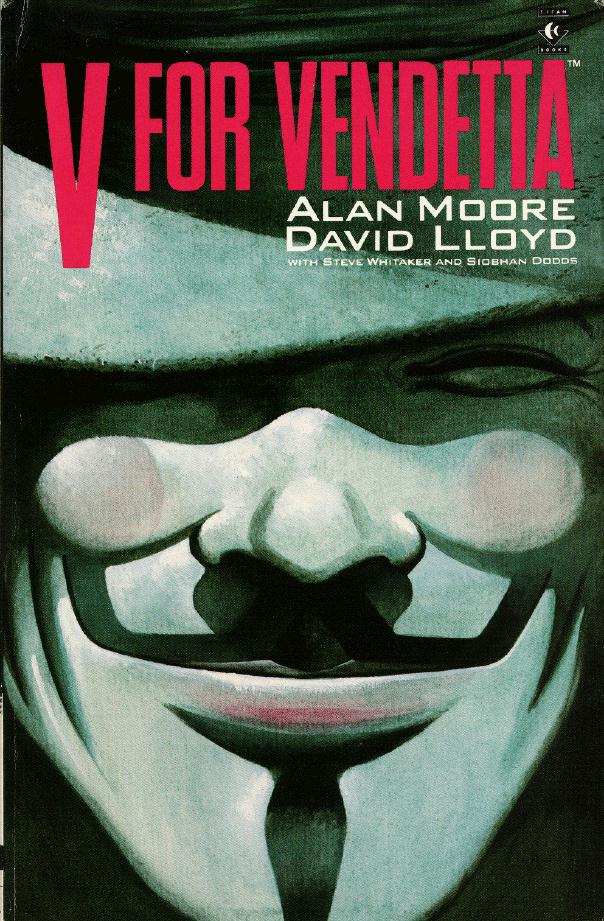 Like Watchmen, V for Vendetta was penned by Alan Moore. Like pretty much any story of his that has been adapted, he hated it.

Comic Book Plot: Taking place in the mid-90s, after a nuclear war and winter in the 80s, where a fascist British government is now in power. V for Vendetta primarily follows V, a vigilante who champions anarchy in the face of a fascist government. The graphic novel starts with V saving the aptly named Evey, who was being arrested by the Fingermen for prostitution. V saves Evey from being raped by the Fingermen. V then sets off a bomb in the deserted Palace of Westminster.

From then on V continues to blow up many other buildings without regard to pretty much anyone else. In an effort to bring people to justice, he eliminates three important party members who were involved with a concentration camp called Lark Hill. The inspector on his case, Finch, sees a trend and warns his boss, who V kills anyways. Although V leaves a clue for Finch in the form of a diary from one of the people who he killed. This gives the inspector just enough information of what happened there, while still keeping all identifying details about V a secret.

At one point in the story Evey decides she needs to go away from V and his strong ideals. Many things happen to her while she is out, but she eventually is captured and arrested for trying to murder a party member. She then is held in a cell and tortured. Evey eventually begins receiving letters from another inmate named Valerie, whom she sympathizes with immensely. When she is interrogated she is given the choice of death and freely takes it. It is then revealed to her that she was being tricked all along by V to be put in a situation much similar to his own at Lark Hill.

V once again bombs yet more buildings(yes again!) and effectively shuts down the surveillance and propaganda machine of the Party. A wave of violence ensues, just the first step to anarchy. The violence is fought with violence by the power hungry Creedy. Much of this, along with realizing that V has been on the Party’s computer the whole time signals the end for the Party’s Leader. In a brilliant portion of backstabbing all the heads of the Party are either killed by each other or by people close (or once close) to them.

Meanwhile, Finch upon taking LSD has entered the frame of mind V is in, and discovers V’s hideout. Basking in the martyrdom V is shot by Finch and killed. He dies in Evey’s arms. Instead of unmasking him, she decides to take up the mantle and assume his role. She sends her mentor on an explosive laden train heading to 10 Downing Street. She then rescues Dominic Stone, Finch’s partner. She intends to set him up as the next V after she continues the role.

The story ends with Great Britain in total anarchy. What’s not to love about that? 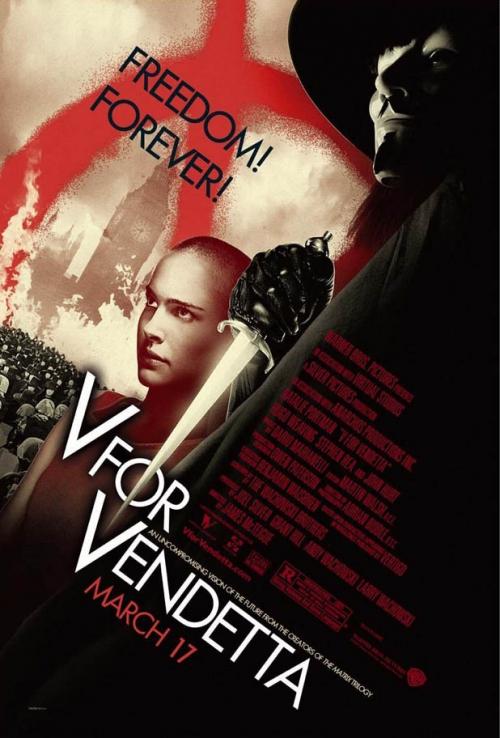 Film Plot: While much of the film’s plot appears the same, it is the finer details that set it apart. It’s creator Alan Moore was convinced there wasn’t a presence of anarachy that was in the original story. Where the V in the film is a romantic freedom fighter, the V in the graphic novel is adamant about his ideals and not willing to let anything come in between them.

Evey’s character is probably more drastically changed than V. In the novel, she is someone who is being saved from being raped over prostitution. In the film we see her being saved from rape because she is out past curfew going to see one of her bosses. In the film she is a strong willed person in the beginning, the novel, an insecure, hopeless girl. Which makes the person she turns into even more amazing. She starts out with almost no hope, into basically leading a rebellion.

The setting is much different also. Instead of a 90s post-nuclear Britain, we are instead somewhere around 2030 in the wake of a national crisis caused by the St. Mary’s Virus many years before. Evey’s character had parents that were freedom fighters and were taken for their insurrection. The St. Mary’s virus is revealed to be put out by the government to gain control over the masses.

In the movie we see the face of evil, and it is a brutal dictator with no remorse. John Hurt plays the Leader as maniacal and cruel. However, in the graphic novel, while still a cruel dictator, he is kind of a sad and lonely man. It is apparent in some parts he wants to be loved and respected by his people. This is one of the things that Moore’s novel is much better at. His characters are very well rounded. The “good” characters all have flaw, but many of the bad characters have feelings so real that you almost pity them at times.

Both the movie and the novel touch upon the fact that much of what is going on is done through the apathy of the public. In both of them V acts as the catalyst to spur them into overthrowing the government. The main differences between them is the level at which it happens. The novel ends in utter violence with no government and anarchy reigning supreme. The film ends on a much higher note, it much less violent and gives more an impression of the people taking back their government.

Final Word: Regardless of Moore’s opinion I love both versions. The film is probably a bit more watered down, but it is also more relevant to the times we are in, compared to the graphic novel. Where Moore’s novel is a response Thatcher-ism (British conservatism movement) in Britain in the 80s. I dare anyone to read or see either or these and not feel a response to how your government is ran.

Come back next week to check out Part 2!