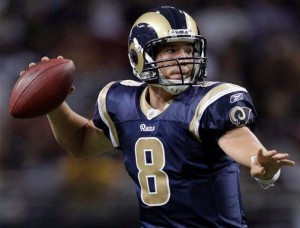 I think football’s back in St. Louis.

Welcome back on the bandwagon. Seems like most of you left the last few years.

The Rams lost today to the Arizona Cardinals 17-13, but all around town, there seems to be the sense of renewed hope for the coming years.

Obviously the big story is going to be Sam Bradford. The first overall draft pick this year didn’t put up terrific numbers statistically (32 for 55, 253 yards, 1 TD, 3 INT, 53.1 rating), but from what I saw, I think we’ve found a terrific leader for years to come.

Did he make mistakes? Sure. Some of the balls were overthrown, and the first pick was a mistake. The second pick was thrown under pressure and he had to get rid of the ball and underthrew it. The final interception was a last-ditch toss-up thrown into triple coverage, so that one can be easily forgiven. But Bradford showed some real poise under pressure, and he showed some guts, diving to recover a fumble in the red zone. Unlike the quarterback play last year, the team seemed to genuinely believe it could win, and it could have. Steven Jackson ran 22 times for 81 yards. Mark Clayton had ten catches for 119 yards, including an absolutely beautiful 39-yard reception to put the Rams in the red zone. He did, however, drop a couple of easily catchable passes, a problem that was prevalent throughout the game. Bradford could have easily had 36 or 37 completions. The Rams recovered four fumbles and, although they gave up 378 yards, they held the Cardinals to just 17 points.

As it is, the Rams made several mistakes that cost them the game. Their first drive resulted in a blocked field goal attempt as a result of blown coverage. Clifton Ryan recovered a fumble and appeared to have an easy touchdown to put the Rams up 20-10 in the third quarter, but he had the ball stripped and Arizona recovered.

Still, the Rams have an energy that hasn’t been present in a long time, and next week presents a very winnable game in Oakland. Can’t. Wait.

As expected, Mizzou routed McNeese State, 50-6. Blaine Gabbert completed his first 15 completions and finished 26 for 31 for 220 yards and a touchdown. The real revelation, however, was freshman tailback Henry Josey, who ran seven times for 112 yards and three touchdowns.

Missouri’s slowly moving up in the rankings. They’re receiving votes in the AP poll and are 25th in the USA Today poll. They host San Diego State next weekend, yet another pay-per-view game. Because apparently Mizzou’s not making enough money off ticket sales.

Yes, the Cardinals are still playing.

In what’s perhaps the most disappointing season in recent years, the Cardinals continue their late-season fade, losing yet again last night 6-3 in 12 innings. The Cardinals currently lead 3-1 as I write this. Albert Pujols has two home runs tonight and drove in his 100th run last night, giving him 100 RBI or more for the 10th straight season. He now stands at a .311 avg, 39 HR, and 104 RBI for the season.

With 21 games left after tonight, the Cardinals sit 6.5 games out of first place. The Reds are doing their part to let the Cardinals back into the race, but the Cardinals are fumbling away chance after chance.