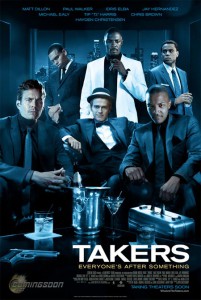 There is a part of me that believes heist films are just as much fantasy as space operas. In this day and age of forensic science, and increasingly great technology, the idea of a major heist going down successfully is pure fantasy. Most of the bank robberies we see reported in the news are small time, and only rarely do we see an actual honest to god “heist”. So, with that in mind, Takers must be viewed outside the realm of reality.

Takers follows a crew of successful bank robbers, who have just completed a large scale job, and once again are gearing to lay low for a year, until they can plan their next heist. These guys are careful, and meticulous in their planning, and no huge risks (other than robbing a bank) are taken. Things change suddenly when an unexpected friend shows up fresh from prison with a sure fire way to make $20 million dollars. Seeing a payday too large to pass up, the group quickly forgets their reservations about their old buddy, and their normal rules and sets in motion a huge score. The group might have another problem on its hands, as two detectives are hot on the heels of the robbery, and will stop at nothing to make sure it doesn’t happen again.

The problem with Takers lies in the plot and the characters, neither of which are very original. As I mentioned earlier a film like this is truly in the realm of fantasy, but it has trouble embracing it, and simply keeps the plot quite pedestrian. At times it feels like watching Oceans 11 minus the charm, plus a bit more of high octane thrills.

Try as they might, talented actors like Idris Elba and Matt Dillon give their best at giving the wooden characters some personality, but ultimately they fail under the less than talented supporting cast of Paul Walker, Hayden Christensen, Chris Brown, and Jay Hernandez. The weakest link of all in the cast is rapper turned actor T.I. (aka Clifford Joseph Harris), who is quite believable as a thug, but never as the clever mastermind to a $20 million dollar heist.

What the film lacks in smarts it makes up for in its thrilling action sequences. Sure, at times the loose camera action can be a bit dizzying to the viewer, but it helps to heighten the suspense, such as Chris Brown’s fabulously athletic chase scene.  The action felt like it belonged in a much better film, and actually made the experience quite enjoyable. It is obvious director John Lussenhop has a good handle on directing action, next he needs to focus on solidifying the plot, and he could have an exceptional film on his hands.

If you are looking for a film that has great thrills, but doesn’t contain a lot of thought once you peer beneath the surface, then Takers is a film for you. It might not be a heist film that competes with the classics, but it makes for a fun matinee.